◾Kia's first plug-in hybrid model
◾Úp to 33 miles of all-electric range with CO2 emissions of just 37g/km
◾Fuel economy of 176.6mpg in the official NEDC combined test
◾All-electric or hybrid drive modes
◾Combined power output of 202bhp with 375Nm of torque
◾Active aerodynamics lower Cd to 0.25
◾Connectivity features include Android Auto and Apple CarPlay
◾Available with an extensive list of active driver assistance features Kia's mission to lower the average CO2 emissions of its range by 25 per cent before the end of the decade is given a boost with the launch today of the company's first plug-in hybrid model, the Optima PHEV. It is priced at £31,495 after taking into account the Government's £2,500 plug-in car grant.With a range of up to 33 miles in all-electric mode, the Optima PHEV is able to complete many regular urban commuter runs with no tailpipe emissions, while its CO2 figure of just 37g/km means company car users pay just 7 per cent benefit-in-kind taxation in 2016-17.The Optima PHEV combines a 154bhp 2.0-litre direct injection petrol engine with a 50kW (67bhp) electric motor powered by a 9.8kWh lithium-ion polymer battery pack. The electric motor replaces the torque converter in the smooth-shifting six-speed automatic transmission. (posted on conceptcarz.com) When working together, the combustion engine and motor generate 202bhp and 375Nm of torque. A package of aerodynamic, styling and technology features contributes towards the Optima PHEV's low CO2 emissions and potential fuel economy of up to 176.6mpg while ensuring it is instantly recognisable as the high-efficiency model in the Optima range. The most significant aerodynamic change is an active air flap grille which lowers the car's drag co-efficient (Cd) to 0.25 when closed. The neat integration of the batteries behind the rear seat and in the spare wheel well, along with a 15-litre reduction in the car's petrol tank, means the Optima PHEV is still able to offer a generous 307 litres of luggage space.

The Optima PHEV is available with a comprehensive suite of connectivity features, including Android Auto and Apple CarPlay (available later in the production run). At the heart of it is the latest Kia audio-visual navigation (AVN) system, operated via an 8.0-inch touch-screen and featuring Bluetooth hands-free mobile phone connectivity with audio streaming. The navigation screen is linked to a rear parking camera.
Exclusive in the Optima PHEV is a series of menus which show the car's EV range at any time, nearby charging stations, energy usage based on driving style as well as other information to help the driver use the electrical energy stored in the batteries in the most efficient way.The AVN system is linked to a DAB digital radio as part of a 590-watt harman/kardon 10-speaker Premium Sound system, which includes an external amplifier and sub-woofer plus Clari-Fi technology, which restores the sound usually lost when digital music files are heavily compressed.There are ÚSB sockets in the front and rear, and a wireless smartphone charger is standard. The AVN system offers the full Kia Connected Services package powered by TomTom. This provides live traffic updates, speed camera alerts and local point-of-interest and weather reports. It is provided free for seven years.Additionally, the Optima PHEV is available with Android Auto for use with Android phones running 5.0 (Lollipop) or higher, and will also offer Apple CarPlay with iPhone 5 or newer from late 2016.Android Auto connects the car to the user's smartphone and, via pre-downloaded apps, gives access to Google Maps navigation, Google Play music, hands-free calls and texts and voice recognition. Apple CarPlay will enable full Siri voice control of the phone's apps and functions while linking the car to Apple Maps, calls and text dictation, music streaming and audiobooks.The next stage in Kia's hybrid development

Hybrids are not new to Kia, but they have never previously been brought to the ÚK because diesels offered greater tax advantages in the all-important company car market. The all-new Optima PHEV, with its extended all-electric driving range, low CO2 emissions and ultra-low company car tax rating, redress this balance and will be an important fleet car for Kia in the ÚK.The core feature of the hybrid system is the next-generation 9.8kWh lithium-ion polymer battery pack, which produces significantly more energy than that in previous Optima hybrids. Meanwhile, the simplicity of the hybrid system allows compact packaging of the petrol engine, electric motor and automatic transmission on the front axle, with minimal energy transfer and conversion losses. This results in excellent performance and range for a D-segment car: up to 33 miles of pure-electric driving at speeds as high as 75mph, with 0-60mph acceleration in 9.1 seconds in hybrid mode. The switch between electric and hybrid driving is seamless, while the electric motor's 205Nm of torque from standstill ensures rapid acceleration and instantaneous response to the throttle pedal. Intelligent fuel-saving and energy-harvesting technologies

The Optima PHEV is equipped with a number of technological innovations to help it use the power in its battery pack in the most efficient way and top up its batteries on the move.
The car's sophisticated technologies include regenerative braking, a driving style guide, an ECO-DAS (ECOnomy Driver Assistance System) featuring Coasting Guide Control, a Drive Mode Select button so that drivers can personalise the powertrain's dynamics, and an HEV (Hybrid Electric Vehicle) Select switch. It also has an intelligent heating, ventilation and air conditioning (HVAC) system to save battery power.HEV Select gives access to two driving modes via a button in the centre console. In EV (charge depletion) mode the car runs as a purely electric vehicle when the energy stored in the batteries is adequate, and is able to regenerate electrical power on the move to recharge the batteries. The Optima PHEV has an all-electric driving range of up to 33 miles. HEV (charge sustaining) mode allows the powertrain to balance the use of motor and petrol engine for a seamless combination of electric and internal combustion power. In this mode, a greater proportion of propulsion comes from the petrol engine and the charge level of the batteries is constantly being topped up for later use.The Drive Mode Select gives the driver the choice of Eco and Normal settings to obtain maximum energy efficiency or greater performance. This switch is also located in the centre console. A driving style guide delivers information through the instrument panel about how efficiently the car is being driven so that drivers can adapt their driving style as necessary. Kia's regenerative braking system, now in third generation guise in the Optima PHEV, allows the car to harvest kinetic energy – energy created by motion – to top up the batteries when coasting or braking.The advanced HVAC system has been adapted from that in the Soul EV, and permits only the driver's side of the car to be cooled when the other seats are unoccupied to minimise energy usage. It does this through a smart air intake, in contrast to rival systems which merely divert the airflow towards the driver when other vents are closed and consequently do not reduce energy consumption. A distinctive look and bespoke interior for the Optima PHEV

A package of aerodynamic and styling changes distinguishes the Optima PHEV from other models in the range. Together, these make the PHEV more efficient at cutting through the air, thus saving precious energy, while ensuring that it is instantly recognisable as the most efficient car in the Optima range.Chief among the aerodynamic improvements is the all-new active air flap grille which automatically closes when engine cooling requirements are at their lowest, so that air passes more efficiently over and around the car. When activated, it lowers the drag coefficient (Cd) of the PHEV to 0.25, rather than the 0.29 of other Optimas. Every small improvement in drag can have a significant effect on fuel consumption, especially at higher speeds. There are also uniquely profiled front and rear bumpers for the PHEV to reduce air turbulence.Distinguishing features of the PHEV are blue-tinted headlights and chrome enhancements with a metallic blue finish on the lower front air grille, the 'tiger-nose' main grille and the side sills. There are 'ECOplug-in' badges on the front wings, while the recharging port for the batteries is housed in the left front wing. Otherwise, the PHEV retains the profile and styling which earned the second-generation Optima the 'Best of the Best' title in Germany's Red Dot design competition, matching the success of the first-generation model.For the PHEV, the standard 8-inch touch-screen features additional menus to help the driver achieve the maximum all-electric driving range. It provides valuable information on the status of the batteries, the location of nearby charging stations, energy use based on driving style and the mileage which can be expected from the energy remaining in the batteries.Retuned suspension and larger brakes

To compensate for the additional weight of the battery pack, the all-independent suspension of the Optima PHEV has been specially tuned, while the brakes have been enlarged compared with those on the diesel-engined Optima. The subframe-mounted suspension – featuring MacPherson struts at the front and a multi-link arrangement at the rear, with coil springs and gas-filled shock absorbers all round – remains unchanged, but the springs, dampers and alignment have been retuned. The result is agile handling with the much-improved ride comfort of the latest Optima. For packaging reasons the Optima PHEV features Kia's column-mounted Motor Driven Power Steering (C-MDPS) rather than the rack-mounted (R-MDPS) system fitted to other versions. To ensure braking performance is at least the equal of other models in the Optima range, the rear brake discs of the plug-in hybrid have been enlarged from the standard 262mm to 300mm.High-strength body and active safety technologies

The Optima PHEV is built around the same, highly protective crash structure as other models in the range, which earned a five-star rating in Euro NCAP impact tests, and will provide exemplary passive and active safety thanks to its occupant restraint systems and advanced active driver assistance features.Just over half of the body (51 per cent) is made of advanced high-strength steels, particularly to reinforce the A- and B-pillars, side sills, floor and front wheel arches. Six airbags are fitted as standard.Electronic Stability Control and Vehicle Stability Management are standard. These can automatically counter any loss of traction when cornering or setting off on surfaces with differing levels of grip from left to right. Hill-start Assist Control, which holds the car when setting off on inclines, is also standard.The Optima PHEV also features a 270o Around View Monitor which, through three strategically mounted cameras, gives the driver a bird's-eye view of the car when manoeuvring. This is supplemented by a reversing camera and audible front and rear parking sensors.Market, warranty and after-care

Hybrid sales in the ÚK and mainland Europe have doubled over the past five years and are expected to reach 700,000 a year by the end of the decade. The Optima PHEV ensures Kia is perfectly positioned to take advantage of this growth.In keeping with every Kia, the Optima PHEV comes with the company's unique-in-the-ÚK seven-year or 100,000-mile warranty, subject to certain wear and tear conditions. The warranty is fully transferable should the car be sold before the time or mileage limits have been reached.The car is available with Kia's Care-3 and Care-3 Plus servicing packages, offering retail customers fixed-cost, inflation-proof servicing for the first three or five years. All work is carried out by trained technicians using genuine Kia replacement parts and specified oils. All packages cover the car, not the owner, so are transferable should the vehicle be sold.Source - Kia 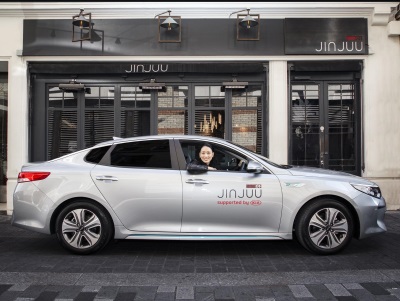 All-New Optima PHEV is Kias first Plug-In Hybrid in the UK. Celebrity chef, receives all-new plug-in hybrid Second JINJUU restaurant to be opened in Mayfair With a second restaurant on the cards in Londons Mayfair, TV personality and celebrity...