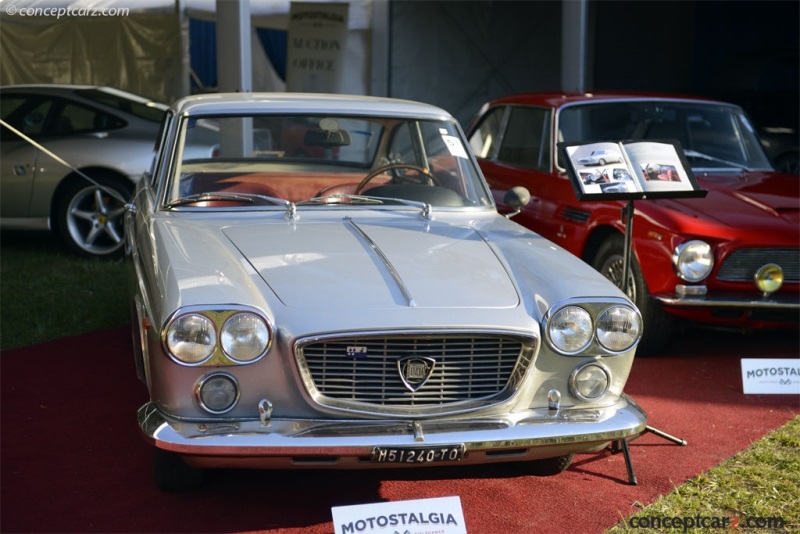 Coupe
Coachwork: Farina
Chassis #: 815430-015329
The Lancia Flavia saloon was introduced in 1961 and wore an Antonio Fessia design inspired by his Cemsa prototype of 1947. The Flavia was Italy's first series-production car to be fitted with front-wheel drive. The engine, which was positioned well forward of the front wheels, had a displacement size of 1488cc. It was a horizontally opposed, overhead-valve, four-cylinder unit with a twin-throat Solex carburetor that produced around 80 horsepower (many owners switched to Weber carburetors for more reliability). An updated 1800cc engine became available in 1963, bringing horsepower to 92 bhp. A Kugelfischer fuel injection unit was made available. The suspension was independent at the front and by beam axle at the rear. There were dual-circuit, servo-assisted disc brakes at all four corners. In 1962, the saloon was joined by a short-wheelbase Pininfarinia-styled coupe. A convertible versions by Vignale soon followed, as well as a fastback coupe by Zagato.The 1800 Series Flavia, which had been introduced in 1963, remained in production through 1969. This particular example is a Pininfarina coupe, which has a similar design to the Ferrari 250GTE. It wears its original Platinum finish and has a tufted leather seats in red. It was recently brought to the United States. The odometer shows 76,000 km.
By Daniel Vaughan | Apr 2017
The Lancia Flavia was produced from 1961 through 1975 with a total of 105,848 examples produced. The design was courtesy of Professor Fessia and initially offered only as a four door saloon. Mounted in the engine bay was an aluminum boxer engine that displaced 1.5-liters. Power was sent to the front wheels with Dunlop discs being placed on all four corners. The saloon was soon joined by a Pininfarina designed coupe sitting on a shortened wheelbase. Other coachbuilders were soon creating their own interpretation of the Flavia, including Vignale who produced a two door convertible, and Zagato created a two-door sports version constructed of lightweight design principles. The Vignale and Zagato versions would continued until Fiat took control of the company in the late 1960s and these two were discontinued. At which time, the coupe and saloon versions were given new bodywork.A 1.8-liter engine was introduced in 1963, featuring mechanical fuel injection using the Kugelfischer system and mated to a five-speed manual gearbox. The engine was replaced in 1967 by a 2.0-liter version available as either a carbureted version of fuel injection. A four- or five-speed manual gearbox were also offered. In the early 1970s, the Flavia was redesigned and renamed to the Lancia 2000. This version featured Girling disc brakes which replaced the Dunlop version. The fuel injected version of the engine used a Bosch D-jetronic Analog-electrovalve fuel injection system.
The Flavia 2.0-liter versions and the Flavia 2000 were only produced with Pinifarina Coupe and Lancia Sedan bodies.
By Daniel Vaughan | Nov 2007