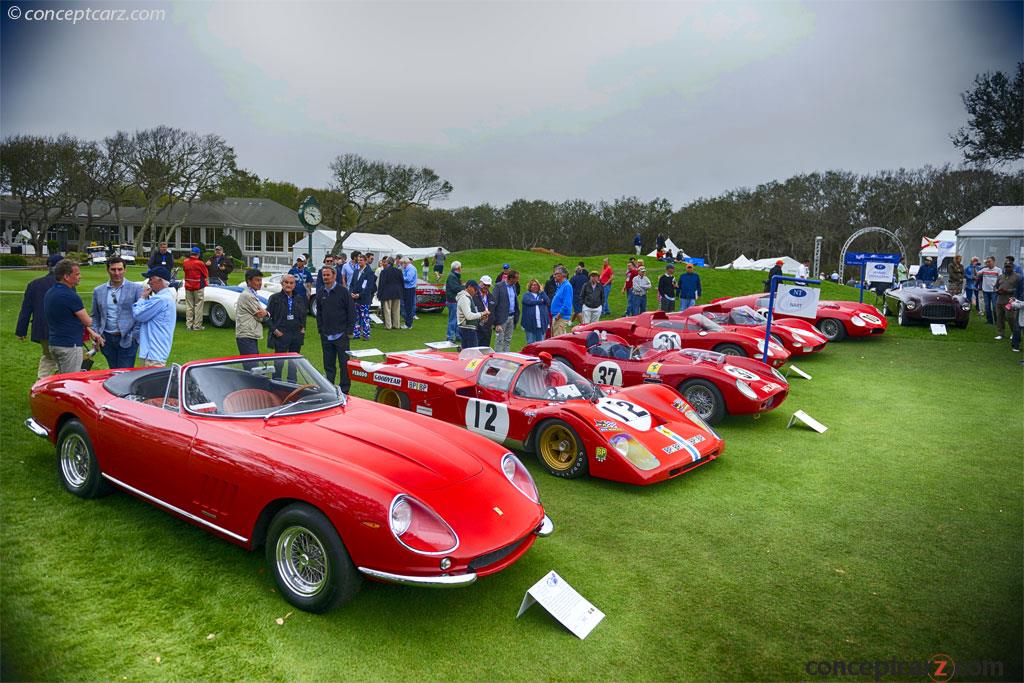 At the 1965 24 Hours of LeMans, during the formidable years when Ford and Ferrari staged the epic and historic battle for supremacy, 11 Fords or Ford-engined cars contested the race. Ferrari had no fewer than 12 of their cars. Ford would be beaten by their lack of reliability, leaving Ferrari to claim their sixth successive victory led by a pair of 250 LM's and a 275 GTB. A year later a 275 GTB finished eighth overall and was the first Ferrari under the checkered flag behind a parade of Fords. In 1967 a 275 GTB won LeMans GT class.

Ferrari's first victory at Le Mans occurred in 1949 with a 166 MM driven by Luigi Chinetti (co-driven by Peter Mitchell-Thomson and Lord Selsdon). Chinetti would enjoy a very successful racing career, driving in 12 consecutive 24 Hours of Le Mans and taking 3 outright victories. Other accolades include 2 victories at the Spa 24 Hours race.

As early as 1946, Chinetti was selling Talbots and pre-war Alfa Romeos to American customers, later becoming Ferrari's agent in France and the United States. He opened the first Ferrari dealership in the United States (in Greenwich, Connecticut) and the business quickly became successful. Using his influence he persuaded Enzo Ferrari to build an open version of the 250 GT Tour de France. At the time, Ferrari produced a convertible V-12 road car called the 250 GT Cabriolet which drew its roots from the Pinin Farina Coupe. The California Spider, based on the far more potent TdF, was designed for a leisurely drive with the top down on Saturday, and racing and winning on Sunday. It was for the discerning buyer seeking Italian style and flair with power, reliability, versatility, and excellent road holding and handling capabilities.

The 250 GT California Spider proved itself a resounding success and remains one of the most beautiful cars to ever come from Modena. Ferrari produced other drop-top models during this era, including the mid-1960s 275 GTS and later 365 California, but neither filled the void left when production of the 250 GT California came to an end in 1963. They were far too luxurious to replace the spartan roadster.

Ferrari produced the 275 GTS from 1964 to 1966 and was introduced at the same time as the 275 GTB. The shared the same mechanical components which included the 3.3-liter V12 and fully independent suspension. The design, created and manufactured by Pininfarina, was different than that of the 275 GTB coupe, with smaller uncovered headlights, and a shorter front hood. In 1966, it was replaced by the 330 GTS.

Using the pages from his 'playbook' from the 1950s, Chinetti once again approached Enzo Ferrari with his idea for a spartan roadster version of the 275 GTB. Ferrari agreed to offer assistance but left the financial responsibility and risk with Chinetti. While the 275 GTS Spyder had an appearance that was different from the GTB Coupe, Chinetti's 'Spyder' was similar to the 275 GTB Coupe. Sergio Scaglietti was enlisted to transform the Pininfarina-designed fixed-head coupe into a roadster. Construction was by Scaglietti, who used steel for the bodies on all examples but the first two.

The first 275 GTB Spyder, known as the 'NART Spyder' since the California designation was already in use for a different model, was completed in January of 1967. By this point in history, Ferrari had introduced the 275 GTB/4, the first production model powered by a quad-cam race-bred 3.3-liter engine. Upon receiving the first completed car, Chinetti entered his new NART Spyder in the Sebring 12 Hours driven by Denise McCluggage and Marianne Rollo to a 2nd in class finish. That same car would later play a starring role, alongside Steve McQueen, in the Hollywood film 'The Thomas Crown Affair.' McQueen was so impressed by the car that he ordered one for himself.

During the late sixties, Ferraris road-oriented Berlinettas split in terms of design from their race cars. After the 250 short wheelbase Berlinetta, the dual-purpose road race Ferrari seemed gone. This new distinction motivated Ferrari to manufacture more civil road cars having impressive specifications. The first example of this new trend was the 275 GTB. The 275 GTBGTS was debuted in October....
Continue Reading >>

Following the introduction of the Ferrari 275 GTB/4, Ferrari's New York distributor and founder of the North American Racing Team Luigi Chinetti convinced Enzo Ferrari to build a convertible for the American market. The new 275 GTB/4S (or GTS/4) NART....[continue reading]

Sport is never far from the design studios of Scaglietti, Pininfarina and Ferrari. The 275 GTB/4S is the first Ferrari street car powered by a four-cam version of Ferrari's immortal Colombo-designed V-12 engine and the first equipped with a transaxle....[continue reading]