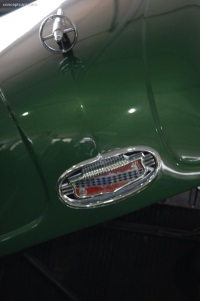 As car production resumed following the end of World War II, the Century and Limited series were eliminated. The Special series, which had accounted for 64 percent of 1941 production, comprised less than three percent of the 1946 model year total. The Super was by far the best seller, accounting for nearly 77 percent of Buick's output, but the Roadmaster increased its share from four percent in 1941 to 20 percent during 1946.

By 1953 the venerable straight-eight engine was replaced by a new V-8, coupled to the new 'Twin-Turbine' Dynaflow automatic transmission. Calculated to increase torque multiplication by 10 percent, the new transmission provided faster and quieter acceleration at reduced engine speeds.

Few mechanical changes were made for 1954, though the front suspension was refined and the Roadmaster's horsepower was upped to 200. Power steering, revised for better handling, and power brakes were standard on the Series 70, as they had been since 1953. Power windows were also supplied as standard on the hardtop and convertible models, and available at extra cost for the sedan.
By Daniel Vaughan | Aug 2011