Lancer Hardtop
Chassis #: M354101498
Sold for $66,000 at 2007 Monterey Sports and Classic Car Auction.
Sold for $55,000 at 2013 Barrett-Jackson Palm Beach.
As the 1950s came to a close, manufactures continued to increase the outlandish designs fitting the vehicles with red rocket-like taillight lenses, dual antennas, huge twin tail fins, and other radical designs. One of the most recognizable vehicles from this era was the Dodge D500 Custom Royal Lancer with its 'swept wing styling' and chrome eyebrow arches across the top of the dual headlamps. In the rear of the car were booster-shaped taillight fins. To match this dramatic style, Dodge equipped the car five available V8 engine options. This 1959 Dodge D500 Custom Royal Lancer underwent an extensive restoration in the early 1990s and the odometer reads 41,000 miles since new. under the bonnet is a powerful 383 cubic-inch V8 engine breathing through a four-barrel carburetor. There is a three-speed torque flight automatic transmission and drum brakes in the front and rear. The exterior is finished in metallic Jade Green and white paint. The interior is the factory correct matching green vinyl and cloth upholstery. It was ordered from the factory with power steering, power brakes, rear window defrost, deluxe radio, dual rear speakers, dual rear antennas, and swivel front seats. It was brought to the 2007 Monterey Sports & Classic Car Auction presented by RM Auctions, where it had an estimated value of $50,000 - $70,000. It was offered without reserve and sold for a high bid of $66,000 including buyer's premium.
By Daniel Vaughan | Dec 2007

Convertible
This 1959 Dodge Custom Royal Convertible is fitted with the Super D-500 V8 overhead valve engine. This means it has an impressive 345 horsepower at its disposal from the five-bearing, Two-Carter four-barrel carbureted engine. The base convertible Custom Royal sold for $3370 in 1959 and only 984 customers opted for this bodystyle. Even fewer selected the potent Super D-500 engine, which increased the base price by $415.
By Daniel Vaughan | Jun 2008

Convertible
'Newest of everything great. Greatest of everything new'Call it the glitter queen of the 'Forward Look.' From scowling face to 'Jet-Trail Tail Lamps,' the 1959 Dodge Custom Royal Lancer is as flamboyant as its extravagant name plate suggests. Did someone mention 'safety?' Dodge's track-tested 'Level-Flite Torsion-Aire' front suspension promised road-going confidence while the 'IndiColor' speedometer ribbon changed colors as speed increased.The Dodge Custom Royal Lancer was apart of an elite class of dramatic styling that came to a pinnacle in 1959. The jukebox tail lamps, bright and multi-colored paint schemes, bright work, and size were part of the elements that made up this sheer styling drama.
All of the 1959 Dodge passenger cars were fitted with Torsion-Air front suspension and rear leaf suspension. 1959 was the final year for the body-on frame construction as the 1960 Dodge models would introduce a new Unibody design.
This Custom Royal Lancer Convertible is painted in yellow-and-black, and is one of just 984 Convertibles produced in 1959. Power is from a rare (and new for 1959) Super D-500, 383 cubic-inch engine producing 345 horsepower. Options include a TorqueFlite automatic transmission and push-button drive, power steering, power brakes, and swivel front seats.
By Daniel Vaughan | Aug 2013

Convertible
Chassis #: M359101230
Sold for $27,875 at 2014 Russo & Steele - Scottsdale.
This Dodge Custom Royal Convertible started life as a 2-door coupe but was modified to become a convertible for the 1989 Paramount Films movie, The Experts, starring John Travolta. The original hardtop is still with the car and can be easily bolted into place as desired.
By Daniel Vaughan | Jan 2014

Convertible
This 1959 Dodge Custom Royal Lancer Super D-500 Convertible is powered by a 383 CID Dual Quad D500 V8 engine offering 300 horsepower. There is an automatic gearbox, power steering, power brakes, power windows, and swivel seats. It has been given a frame-off restoration and finished in two-tone Safari Blue and Blue Diamond paint. It has many features including swivel front seats, power windows, power steering, padded dash, padded steering wheel, push button transmission, dual rear antennas and a European style cloth convertible top.
By Daniel Vaughan | Apr 2017
Before the creation of the Daimler Chrysler in 1998, the Dodge Lancer was the model for the Dodge division and used to denote models three times in its history.

Designating both two and four door pillarless hardtop models in the Coronet, Royal and Custom Royal lines, the Lancer name was used by Dodge from 1955 to 1959.

A two door hardtop version of the mid-level models designed by Dodge in 1955, the Lancer ran in the production line until 1960.

On V8 powered models, a V8 emblem was customized to the side, just below the V in the side trim.

The Lancer name was passed on to a clone on the compact model Valiant which was met with huge success during the 1961 year. Given round taillights with full width grilles, Lancers used a Slant-6 engine.

South Africa introduced a right hand drive version of the Lancer that was sold from 1961 to 1963 though renamed as the DeSota Rebel. Equipped with the same 170 in³ Slant 6 engine, most came with the 3-speed manual transmission. In accordance to South Africican vehicle equipment ruglation, white reflectors were mounted to the front bumper.

Though not meeting sales expectations, possibley due to total resign of Dodge's compact car line, the Lancer was discontinued in 1963.

Re-introduced in 1985, a mid-sized 5-door hatchback version cloned from Chrysler LeBaronGTS and based on the Chrysler H platform.

All production and design work was done in Sterling Heights Michigan.By Jessica Donaldson 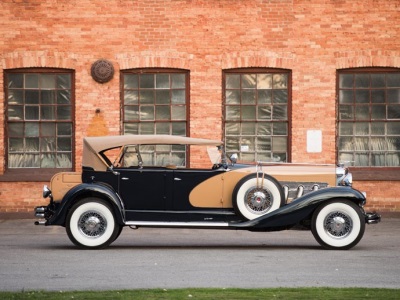 RM Sothebys readies for its annual Motor City sale, July 25, in Plymouth, Michigan Event is the official auction of the Concours dElegance of America at St. Johns Latest auction highlights in...