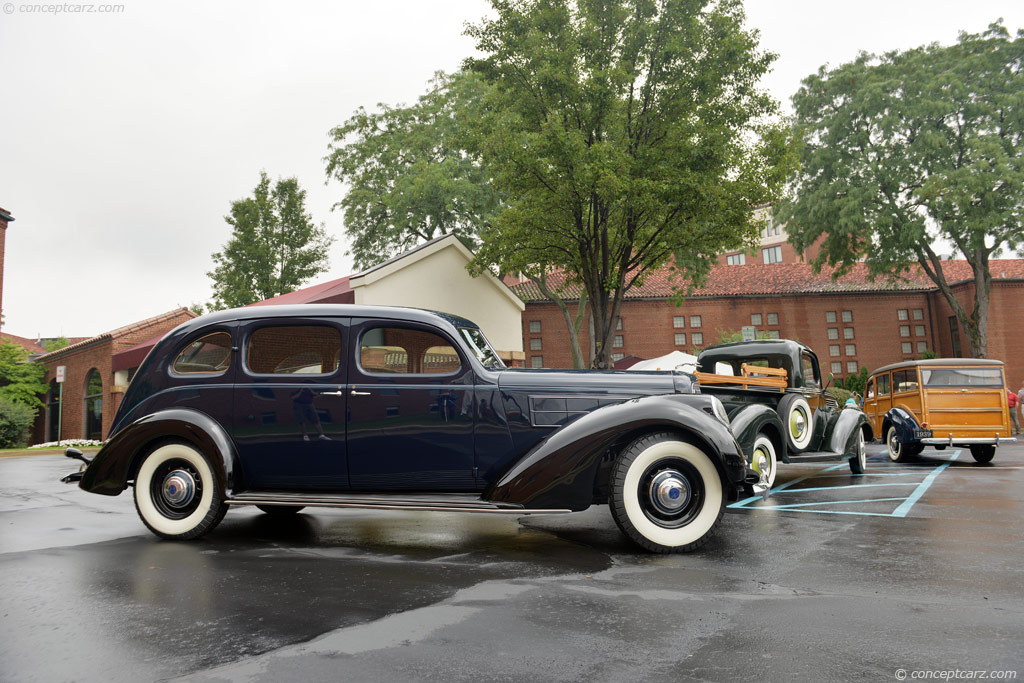 Following a disagreement, Henry Leland left GM to start his own company. He built Liberty aircraft engines and, after World War I, turned his attention to building motorcars. His new Lincoln made its debut in September of 1920 as a 1921 model. Although technically advanced, they lacked style, and production never really took off. In 1922, the Lincoln automobile was put up for sale and was purchased by Henry Ford. Ford's intervention, deep pockets, and styling turned the company around.

The Lincoln Model K was introduced in 1931, and by 1935 it received an all-new chassis and body styles. To achieve a lower center of gravity, the passenger space was moved forward by eleven inches, placing all seats ahead of the rear axle. With lower seating, the bodies could be more streamlined. All cars were now designated Model K, regardless of wheelbase. Mechanically, they were little changed.

The 1937 Lincoln lineup included the Zephyr and the Model K, offered in 17 custom body styles. Styling was simplistic, perhaps influenced by Cord, and the front headlamps were now of an art deco teardrop design that had been streamlined into the front fenders. All of the standard bodied were given the V-front windscreens. The belt moldings were removed and replaced by a narrow crease, and the doors extended down almost to the running boards. The V-12 engine received hydraulic lifters and a different cam contour. A new camshaft was accompanied by hydraulic valve lifters and new engine mounts moved the powerplant even farther forward. Production and semi-custom body styles now numbered 21, the customs supplied by LeBaron, Brunn, Judkins, and Willoughby.
by Daniel Vaughan | Jan 2020

There were a total of 17 styles available on the Lincoln Model K for 1937. One of the premier coachbuilders for the series was Willoughby of Utica, New York. Their roots extended to the carriage trade. R.M. Bingham of Rome, New York purchased the nea....[continue reading]

Henry and Wilford LeLand's Lincoln Motor Company began producing Liberty airplane engines in 1917. Leland decided to enter the automobile production business after the contract for the Liberty engines were fulfilled. The first cars were produced in 1....[continue reading]

By 1937, sales of the Lincoln K, introduced in 1931, had dwindled as the era of big V12 and V16-powered luxury cars was coming to an end. However, Edsel Ford commissioned custom body builder Francis Willoughby of Utica, New York to produce a large, 7....[continue reading]

The custom coach-building business was in serious decline by the late 1930's. Lincoln Motor Company, through Edsel Ford, kept many of the remaining coach builders in business. Mr. Ford offered 13 of this sport sedan body style from the Willoughby C....[continue reading]

This Model 367-A Judkins 2-window, 5-passenger Berline is a very rare body style with only 47 built new. This car wears a fresh restoration with only test miles since completion. The car is painted in Dalmatian Green and black paint accented by a F....[continue reading]

This seven-passenger Limousine is one of the very few known survivors of 248 built-in 1937. This Lincoln has been treated to a restoration and has covered only a few miles since that time. It wears a combination of dark blue and black paint with corr....[continue reading]

The Lincoln K-Series was a luxury vehicle that was produced until 1942. In 1937, sales of the Lincoln K had dwindled as the era of big V12 and V16-powered luxury cars was coming to an end. However, Edsel Ford commissioned custom body builder Willough....[continue reading]

This Lincoln Model K Dietrich Convertible Sedan is powered by a 384 cubic-inch V8 engine and rests on a 145-inch wheelbase. The 1931 Lincolns were among the largest and most luxurious cars of the era. Only 3,600 were built, and many had custom coachw....[continue reading]

For 1937, Lincoln added the Zephyr to its lineup and produced alongside the Model K. The Model K continued to be offered as a prestigious model wearing a simplistic design. In the front, the headlamps were now of an art deco teardrop design that was ....[continue reading]

In 1935 the V12 Lincoln became known as the Model K, and various different body styles from several coachbuilders were offered until 1940. This 1937 Lincoln Model K is one of 977 Model Ks built that year in 21 different body styles. One of only 7 Sem....[continue reading]

The first Lincoln K V12 with Brunn Touring Cabriolet coachwork was that of Herman Brunn himself. This body style was then offered in the Lincoln catalog in 1937, 1938, and 1939. Ten of these luxurious motorcars were built in 1937, and they were at th....[continue reading]

This Lincoln Model K with Convertible Sedan coachwork was bodied by LeBaron and is one of the thirty-seven examples built. It is a 363A model built on a 145-inch wheelbase and powered by a 414 cubic-inch V-12 engine mated to a three-speed manual gear....[continue reading]

This Lincoln Model K Touring by Willoughby was built for Russell Leffingwell, chairman of the board of J.P. Morgan & Company, who used it for travel to his summer house on Lake George in upstate New York. During the mid-1940s, the car was sold by the....[continue reading]

Lincoln styling for 1935 featured streamlined bodies on the Model K chassis, with the passenger compartments moved forward on the chassis, and with its lower center of gravity, the ride and handling were improved. Many Model Ks were built to specific....[continue reading]

Total 1937 Lincoln Model K production: 977
© 1998-2020. All rights reserved. The material may not be published, broadcast, rewritten, or redistributed.