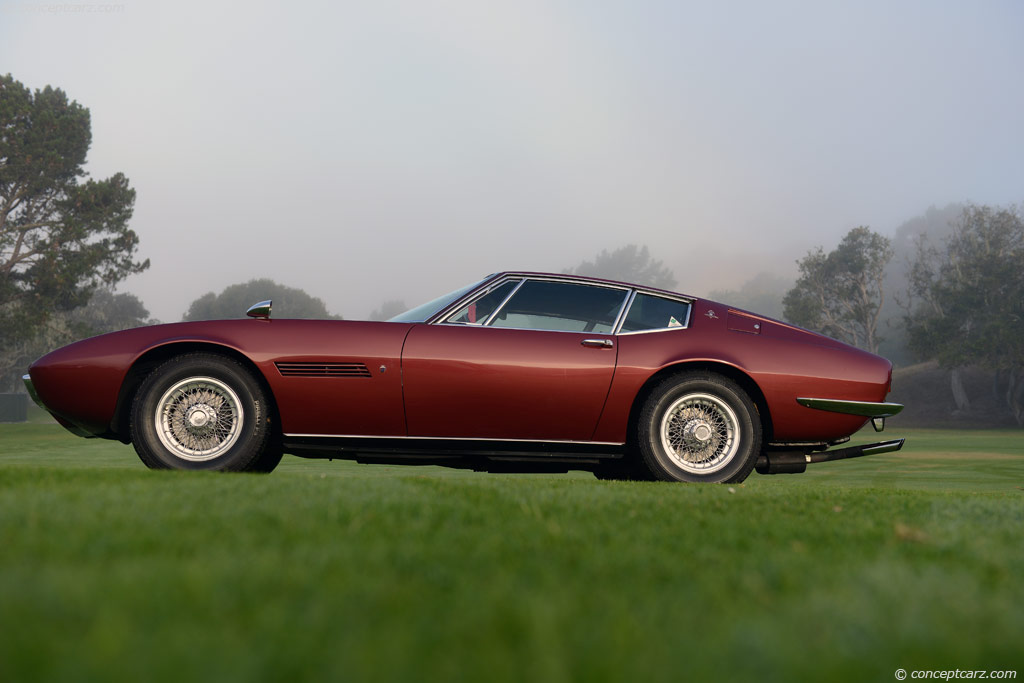 Maserati named the Mistral and the Khamsin after European winds. The Ghibli continued this tradition, being named after a warm wind from North Africa of the Libyan Desert. A young Giorgetto Giugiaro, then with Ghia, penned the Italian bodywork in less than three months. The dimensions measured over 70-inches wide and 185 inches in length, offering the two-seater Ghibli plenty of interior space and a sporty stance. The height measured a mere 45.7 inches making it one of the lowest on the road during that era, albeit one with restricted headroom for rear passengers. In the front was a wedge-shaped nose with pop-up headlamps, and alloy wheels were placed at all four corners. The steeply raked windscreen flowed gently into the roofline that gracefully sloped into the chopped-off tail.

The Ghibli (Tipo AM115) was unveiled as a 2-seater concept car at the November 1966 Turin Motor Show. The production versions that followed were marketed as a 2-door 2+2 fastback coupe, although the rear seats had nothing more than a cushion without a backrest. Deliveries began in March of 1967.

Mounted in the front was a quad-cam 90-degree 4,791cc V8 engine with dry-sump lubrication enabled it to be mounted deep in the chassis, permitting the low bonnet line. The engine was derived from that of the 450S sports racer and first used in the road-going guise in the 5000GT. The 4.7-liter form was used up to 1970 when it was superseded by the 4.9-liter SS version in order to comply with strict emission laws. It gained minimal horsepower, but in either case, the performance was exceptional with 100 mph attainable in less than 16 seconds. The enormous torque from the V8 engine gave the car impeccable road manners at speed, making it an ideal grand tourer with top speeds in excess of 150 mph.

The Ghibli, like the contemporary Mexico 2+2, rested on a shortened version of the Quattroporte saloon's tubular steel chassis in its live rear axle form. Instead of using a complex suspension set up like many of its rivals, the Ghibli used leaf springs and a single locating arm. The limited suspension travel ensured that the tires did not impact the wheel arches.

At Turin in October of 1968, Ghia introduced the Ghibli sans roof. The example on display was chassis number 1001 finished in bright Giallo (yellow) paintwork with a Testa di moro (dark brown) leather interior. Production Ghibli Spyders closely resembled chassis, with a number of subtle differences. Among the most noticeable were the recesses in the door panels where the door hands are mounted on chassis 1001. The production examples had an external fuel filler door located on the rear deck - chassis 1001 did not. The boot lid on chassis 1001 was longer than the production spyders that followed. Other changes included mounting the radio antenna at the rear of the fender, a trunk-lid release lever that operates inversely to that on production Ghibli Spyders, and Maserati and Ghibli badges located on the driver's side of the rear fascia rather than split, as found on the production spyders. Mechanically, chassis 1001 had an extra impression on the engine's cylinder heads allowing for twin-spark ignition for each cylinder, a configuration found on early versions of the 4.7-liter engines.

The Maserati Ghibli was put into production in 1967 but it was the prior year at the Turin Auto Show where it made its debut. The 22 coupe body was designed by Giugiaro, an employee for the Ghia design studio. The headlights were pop-up configuration adding to the sleek and aerodynamic design. Powered by a 4.7-liter eight-cylinder engine, the vehicle produced 340 horsepower. The rear suspension was....
Continue Reading >>

Maserati has lately reinvented its presence in the U.S. market. After being driven out in the very early 1990s by pitifully slow sales of the underappreciated Biturbo, Maserati made a return to the U.S. for 2003. It brought with it an entirely revamped product line consisting of some phenomenal cars. Fast forward to now, and Maserati had just released a beautiful new coupe, the GranTurismo. Its name....
Continue Reading >>

The Maserati Ghibli, like its sisters cars - the Mistral and Khamsin- were named after European winds. Since Maserati was a small boutique manufacturer, Maserati sourced the Ghibli's tubular chassis with other cars in the company's repertoire, includ....[continue reading]

The first Ghibli was a two-door, 2+2 GT released in 1967. It debuted at the 1966 Turin Motor Show and proved to be the most popular Maserati since the 1950s, outselling the Ferrari Daytona and the Lamborghini Miura.....[continue reading]

The Maserati Ghibli made its debut at the Turin Auto Show in 1966 and was put into production the following year. The 2+2 coupe body was designed by Giugiaro, then working for the Ghia design studio. The headlights were a pop-up configuration adding ....[continue reading]

This Maserati Ghibli 4.7-liter Coupe by Ghia was produced on November 20th of 1968. It was finished in Rosso Rubino over a White interior in the current configuration it wears today. It was delivered new to Rome and would remain in Italy for nearly i....[continue reading]

The Ghibli was named after European winds. Giorgio Giugiuro, then chief designer at Ghia, was tasked with creating the elegant, wedge shaped design. It's powered by a 4.7 liter Maserati's twin cam V-8 engine offering 330 horsepower. The car was purch....[continue reading]

The Ghibli was produced between 1966 and 1973. Originally a V-8 grand touring car, it evolved over the ensuing years into the 4-door sedan of today. Introduced as a 2 seat concept car at the1966 Turin Motor Show, the addition of a simple cushion behi....[continue reading]

Total 1968 Maserati Ghibli production: 0
© 1998-2021. All rights reserved. The material may not be published, broadcast, rewritten, or redistributed.