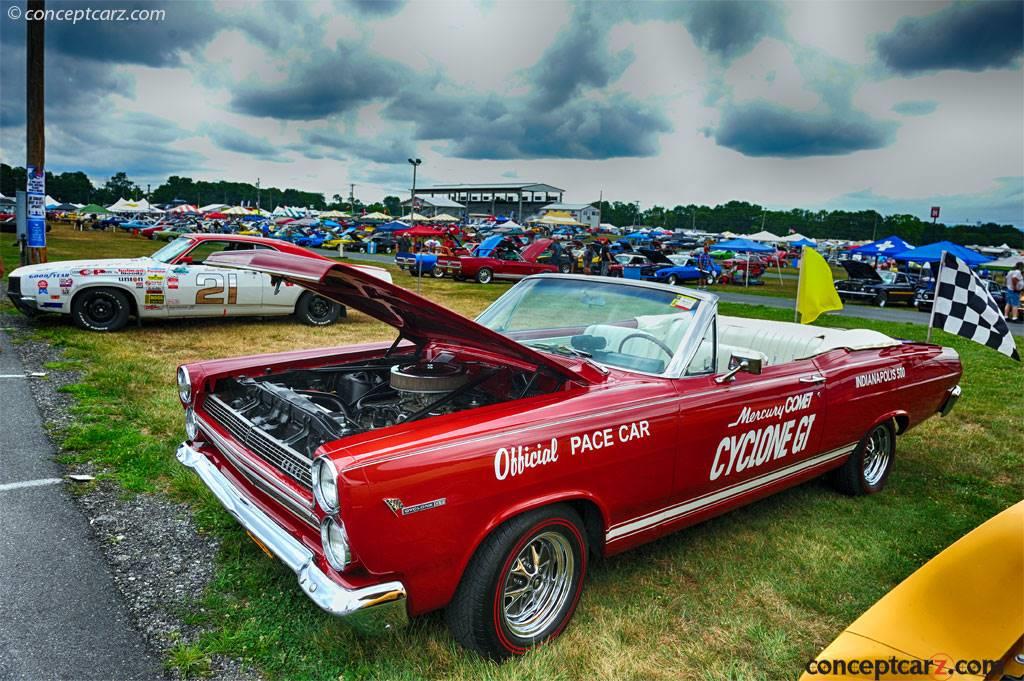 The Mercury Comet was originally conceived to be part of the Edsel line of cars, but the demise of the ill-fated nameplate saw its re-assignment to the Lincoln-Mercury division to sell at Mercury-Comet dealerships, where it was sold as a stand-alone product for 1960 and 1961. From 1960 through 1965, the Comet was built atop the Ford Falcon platform with sedan and wagon body styles stretched an additional five inches. The first generation lasted from 1960 through 1963, and the second generation was built in 1964 and 1965. The third generation was built in 1966 and 1967 and was built on a 116-inch platform with body styles that included a hardtop, convertible, and 2- and 4-door sedan. The station wagon rested on a 113-inch platform. In this guise, the Comet went from being a compact to a mid-sized car and was now based on the same chassis as the Ford Fairlane intermediate.Exterior styling changes included the stacked headlights and a two-level grille with criss-cross pieces. The distinct outer body panels were modern, crisp, and clean with minimal chrome treatment and three vertical bars on the front fenders. Standard equipment now included a heater and defroster. The base engine was an overhead valve six-cylinder unit with a 200 cubic-inch displacement and developing 120 horsepower at 4,400 RPM. Optional engines included a 390 CID V8 with a two-barrel carburetor offering 265 horsepower at 4,400 RPM. The 390 CID V8 with 4-barrel carburetion delivered 275 horsepower. The 390 CID V8 offered 335 horsepower and had a 10.5:1 compression ratio, high-lift cam, special valve-springs and distributor, low-restriction air cleaner, power fan, and dual exhaust.
The Capri trim level added front fender medallions, chrome side window trim, and rocker panel moldings. Body styles included a hardtop coupe and four-door sedan.
The Mercury Comet Caliente trim level had additional chrome trim over the wheel well openings and above the rocker panels. The interiors became more comfortable with additional standard amenities. Body styles were the same as the Comet 202 and Capri, but added a convertible. The Mercury Comet Cyclone GT could be identified by the Cyclone nameplate located on the fender, chrome wheels, body strips above the rocker panel, and a horizontal bar grille in the front. The interior featured bucket seats. Body styles included a hardtop coupe and a convertible. The engine was an overhead valve eight-cylinder unit with a two-barrel carburetor helping to deliver 200 horsepower at 4,400 RPM. The Cyclone GT came standard with the 390 CID V8 with 335 horsepower and when equipped with an automatic transmission was referred to as the Cyclone GTA. The GT option added twin hood scoops, body stripes, a unique grille, special emblems, heavy-duty suspension, dual exhaust, and power booster fan. A power transfer axle was also available.Nearly seventy-five percent of the Comets were equipped with automatic transmissions. A Cyclone GT Convertible performed pace car duties at the 1966 Indianapolis 500. Mercury built 2,158 Cyclone GT convertibles with 100 of those made to commemorate the Indianapolis 500. 33 cars were commissioned to be official Indianapolis Motor Speedway 'parade cars' for selected individuals to use in May 1966. All pace cars at Indy had the Merc-O-Matic C-6 automatic transmissions in 1966 that could be shifted manually, and the differential 3.25:1 gearing. Additionally, the engines received a dress-up kit, front-wheel disc brakes, and a handling package. All 1966 Indy pace cars featured parchment-toned interior and a center console between bucket seats. The dash includes the Rally Pac instrument cluster with a dash-mounted tachometer. The drivers' side mirror is remote, as is the trunk release. The convertible top is power and the pace car has power steering. The steering wheel is wood-grained with Cyclone GT badging.Standard exterior components included a twin-scoop fiberglass hood, GT stripes and badging, chrome styled steel wheels, and Redline Firestone Wide Oval tires.
By Daniel Vaughan | Aug 2020
From 1964 through 1971, the Mercury Cyclone was a performance model of the Comet. For 1966, the Comet grew from a compact to an intermediate. The Cyclone models had a special front fender nameplate, an overhead valve V8 displacing 289 CID and offering 200 horsepower, body strips above the rocker panels, and a unique horizontal bar grille. Chrome wheels were standard. Inside, occupants were treated to bucket seats. Pricing began at $2,700 for the hardtop coupe and rose to over $3,100 for the GT Convertible. The most popular body style was the GT Coupe which saw 13,812 examples sold. Just 1,305 of the Convertible and 2,158 of the GT Convertible were built.In 1968, the Cyclone was given its biggest facelift, switching from the prior year's boxy Fairlane-derived coupe appearance into a streamlined Torino-based fastback. Of the 2,158 Cyclone GT convertibles built in 1966, just 100 were made to commemorate the Indianapolis 500 race. Of those, just 33 were built as an official Indianapolis Motor Speedway 'Parade Car' for dignitaries to use in May of 1966. The Cyclone GT commemorate cars had pace car decals that come with the car in the trunk.
By Daniel Vaughan | Jul 2014
The Mercury Comet series grew from a compact vehicle to an intermediate platform. In the front was a two-level grille flanked by a stacked headlight arrangement. On the front fenders were three bent vertical bars. Standard equipment included a heater and defroster. The Caliente Series was similar in design to the Comet series. The Caliente body styles included a sedan, hardtop coupe, and a convertible. Distinguishing features included chrome trimmed wheel-well openings and moldings above the rocker panel. Inside, they were more plush and luxurious than the Comets. The most popular bodystyle for the Caliente was the hardtop coupe, which found 25,862 willing buyers. Just 3,922 examples of the convertible were built along with 17,933 of the sedan.
The base engine in the Comet was a 200 cubic-inch, overhead valve six-cylinder unit that offered 120 horsepower. A three-speed manual transmission was standard. A four-speed manual and Merc-O-Matic were optional equipment.
By Daniel Vaughan | Feb 2015

In the beginning, the Comet was designed as an Edsel model and not officially a Mercury until 1962. The Comet was based on a stretched Ford Falcon from 1960 to 1964. Produced by the Mercury division of the Ford Motor Company between 1960 and 1977, the Comet was classified as a compact or intermediate-sized car. With a longer wheelbase and a better grade interior trim detail, the Comet....
Continue Reading >>