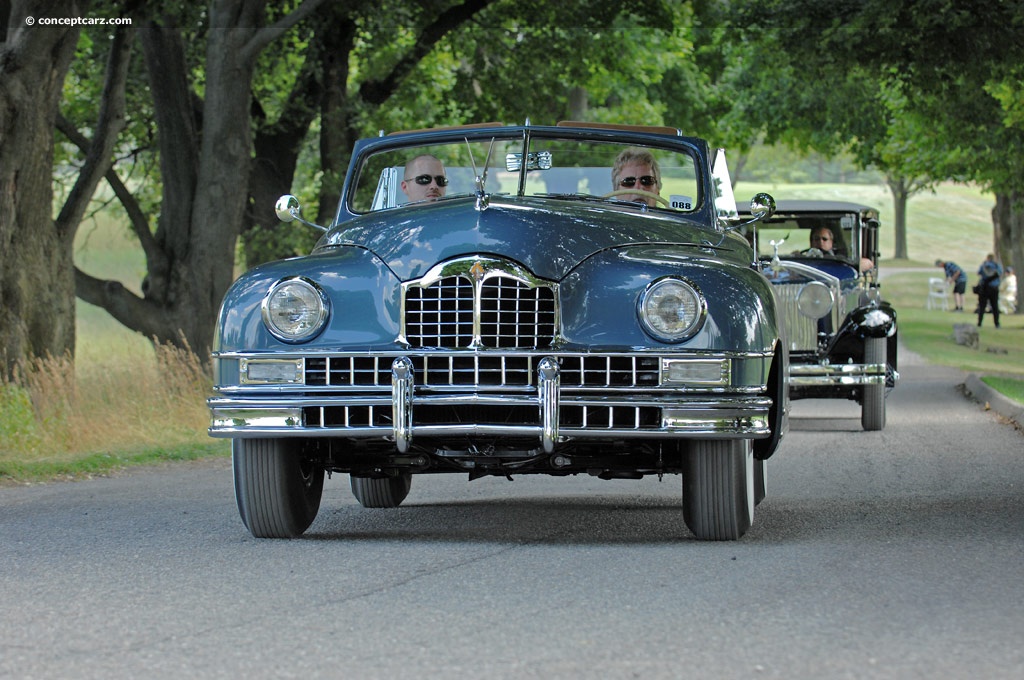 Packard had introduced their handsome new 'Clipper' in 1940 but by the post-war period it appeared to be dated. Faced with a styling decision, they decided to hold something of the original lines of the Clipper and endeavor to make it look more contemporary. While a fine car, the styling results are somewhat controversial. Packard set a new sales record with this model.
by Daniel Vaughan | Oct 2006When the Packard Company began automobile production in 1899, it was known as Ohio Automobile Company. In 1903 the name was changed to the Packard Motor Car Company when it moved from Warren, Ohio to Detroit, Michigan. The move was the result of a majority stock purchase made by investors in the Detroit area.

Packard had sustained a Great Depression and a World War and was still at the fore-front of vehicle production. Advances in automotive technology and design were making vehicles more and more exciting each day. During the early forties Packard decided to compete in a broader market by introducing the Clipper, a vehicle aimed at higher production but lower cost.

The sales of the Clipper series were very successful, outselling Cadillac and LaSalle. The vehicles were stylish, durable, and elegant. The body of the vehicle had been designed by Howard 'Dutch' Darrin and sat atop the 120 chassis. The Packard 120 was the company's first sub-$1000 car. It was aimed at stimulating sales and increasing production.

Post WWII Era
When automobile production began, Packard decided to only produce the Clipper Series and abandon the other model lines. For 1946 Packard produced the Clipper Six 2100 and 2103, Super Clipper 2103, and the Custom Super Clipper 2106. The Super Eight and Custom convertibles were added in 1947. In 1949 Packard introduced the 23rd Series Eight and Deluxe Eight.

For 1948, the Clipper name no longer appeared on the Packards; the models were now known as the Eight Series in Standard, Deluxe, Super and Custom. Within these groups, there were standard wheelbases, long wheelbases which were mostly reserved for limousines. The standard/deluxe eight-cylinder engine was an L-head unit with cast-iron block and displaced 288 cubic-inches. Horsepower measured 130. The super eight had a 356 cubic-inch eight-cylinder engine and it produced 145 horsepower. The most powerful engine in the Packard lineup for 1948 was the Custom Eight L-head engine which had a 356 cubic-inch displacement and 160 horsepower. The Custom Eight was Packard's luxury line which required this powerful engine to carry its rather large and luxurious body. The rear wheels were given standard fender skirts, giving the car a clean and graceful line from front to rear. The front had an eggcrate-style grille insert design with a vertical cormorant or pelican mascot adorning the front of the hood. The price range in this category began at $3700 and escalated to nearly $4900 for the 4-door Limousine.

The Super Eight sat in between the Standard/Deluxe and the Custom Eight, offering excellent performance and style at a reasonable price.

The Eight Series, with names such as Deluxe, Standard, and Custom would adorn the Packard's for many years. Packard had one of the more unique naming schemes for an American car company, with each year representing a new Series and did not follow a model year changeover system.
by Daniel Vaughan | Jul 2007

For 1948, the entire Packard line-up was completely restyled. For Packard, it represented an all new look - a complete break from its pre-war design. The Custom Eight series was Packard's top-of-the-line series. The Custom Eight was instantly ....[continue reading]

92,251 total vehicles produced by Packard in 1948
Total 1948 Packard Custom Eight production: 0
© 1998-2020. All rights reserved. The material may not be published, broadcast, rewritten, or redistributed.