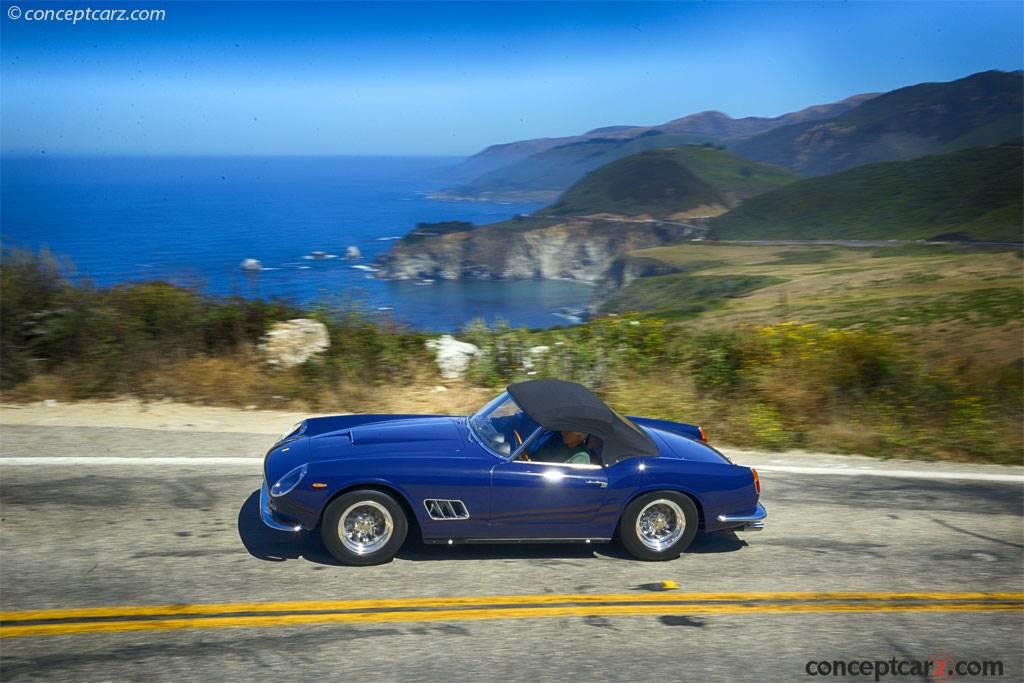 The Ferrari 250 GT SWB California was based upon the 250 GT Tour de France, and given characteristics closer to that of a racing car than its more luxurious stable mates - the 250 GT PF Cabriolet. The intended clientele were young, well-heeled American enthusiasts who were seeking a stylish sports car that could perform on either the road or the track. It was given a swept-back windscreen, a lightweight folding top, minimal interior appointments, and supportive competition-inspired bucket seats. The early cars rested upon the long-wheelbase chassis (LWB) which is shared with the 250 GT Tour de France Berlinetta and Series I Cabriolet. In late 1959, the California Spider received disc brakes and tubular shock absorbers.

Several examples of the LWB California Spyder were factory-equipped with competition features such as aluminum coachwork, high-lift camshafts, and long-range fuel tanks with outside fillers. Racing accomplishments included a 5th Place finish at Le Mans, a class win at Sebring, and many victories in SCCA B-production events.

In 1960, Ferrari introduced the short-wheelbase (SWB) Berlinetta and a short time later, the California Spyder was thoroughly redesigned to complement its new stablemate. It received a much more sophisticated chassis, a more refined suspension, standard four-wheel Dunlop disc brakes, and new outside-plug Tipo 168 and 168/61 engines. The exterior received curvaceous front fenders and muscular rear haunches. The interior was much more luxuriously trimmed and refined than the earlier LWB California Spiders. Wool carpeting replaced rubber floor mats, stitched leather took the place of wrinkle-finish paint on the dashboard, and the seats were redesigned.

Several examples of the SWB Caliofrnia Spider raced at major European events such as the 24 Hours of Le Mans and the Targa Florio.

This 1963 Ferrari 250 GT California Spyder Replica began life as a 250 GTE. The GTE series was Ferrari's first true production four-passenger model and rode comfortably on a wheelbase that measured 102.3-inches. This car was given its California Sp....[continue reading]

Built upon a 250 GTE 2+2, this car is a faithful recreation of the legendary 250 California Spyder SWB. Items such as the gas tank, springs, seats, and so on were built to exact specifications. Other items used in the build were original California....[continue reading]

The Ferrari 250GT SWB Spyder California was designed by Pininfarina and built by Scaglietti. It has the powerful Tipo 168 Berlinetta Lusso 3-liter V12 engine, which develops 280 horsepower capable of propelling the car from zero-to-sixty mph in less ....[continue reading]

This Ferrari 250 GT was sold new in early 1963, through Ferrari dealership Charles Rezzaghi Motors of San Francisco, to its first owner, Edwin Schenk of Santa Rosa, California. It is the second to the last of the 37 covered-headlight, short-wheelbase....[continue reading]