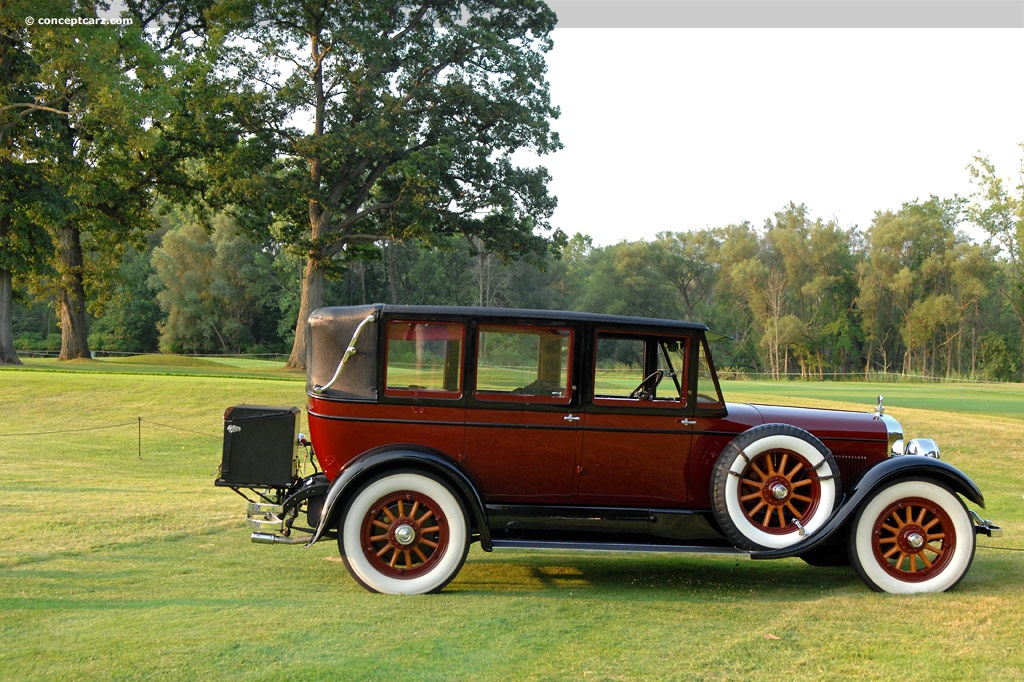 The Lincoln Motor Company was founded in 1917 by Henry M. Leland and acquired by Ford in 1922. Leland, one of the founders of Cadillac, had left Cadillac during the First World War to form the Lincoln Motor Company, which was intended to build Liberty aircraft engines. He had left Cadillac due to a disagreement with General Motors boss William C. Durant. When Leland left, he was 74 years old, and chose the name Lincoln after the President he had voted for in 1864. At the conclusion of the War, Leland was forced with the decision to close the plant, or try to find another business for the 6000 employee's and the factories. The factory was retooled to accommodate luxury automobile manufacturing.

The transition period and process was difficult and the company entered financial difficulties. It was bought by the Ford Motor Company, and served as a personal victory for Henry Ford. During the very early years of automobile production, Henry Ford had been forced out of his second company by a group of investors led by Leland. Henry Ford's original company was later renamed Cadillac and later purchased by rival General Motors. This would later become Lincoln's chief competitor.

In 1927, the Lincoln marque adopted the greyhound as their emblem, which was later replaced with diamond, which is still in use in modern times.

The Lincoln L Series was powered by a 60-degree V8 engine producing 80 horsepower and had a guaranteed top speed of at least 70 mph. Those who did purchase a very early Lincoln automobile had to wait nearly a year for delivery, as the company was behind by eight-months and deliveries did not commence until September of 1920. The post-war recession, slow delivery time, and dated appearance all affected sales negatively. The board members put the company up for sale in 1922, and Henry Ford took the opportunity to enter the luxury car segment.

Henry's son, Edsel Ford, was given the responsibility of running the Lincoln Company. Quality and sales improved. The engines were given aluminum pistons and improved cylinder head cooling which greatly increased the vehicles durability, ride, and performance. The wheelbase was enlarged from 130-inches, to 136-inches in 1923. Some of the finest coachbuilders of the time were invited to work their craft. Names included Brunn, Dietrich, Holbrook, Judd, LeBaron and Locke.

By 1928, the engine had been enlarged from 357.8 cubic-inches to 384.8 cubic-inches and horsepower increased to 90.
By Daniel Vaughan | May 2007Considered to be one of the most elegant of chauffer-driven automobiles of the 1920's, the Lincoln Model L Towncar was introduced in 1924. The Model L was an exclusive portrayal of the brand that represents everything that embodies American Luxury, Lincoln. Founded by Henry M. Leland in 1917, Lincoln Automobiles were operated under the Ford Motor Company. LeLand's favorite President had always been Abraham Lincoln, and at the age of 74, Henry founded the Lincoln Motor Company.

Beginning with the same desire for upscale markets that has carried through the years, the vehicles produced in the 1920's were just as exquisite and they are today. Leland has been recognized for his reputation for quality vehicles for the entirety of his career. Also known for prestige and status, the Lincoln automobile has been produced upon a standard of luxury and excellence.

Leland was an expert at producing cars that were of the greatest care and quality, but he was not adept at adding the finer points of styling to the Lincoln. The tight economic times and the stogy appearance of the Lincolns forced sales to droop. Customers could not afford the $4600-6600 price tag, though it was comparable in size and price to the Cadillac, the amount equaled most annual salaries. The Ford family swooped in at this time and purchased Lincoln at an incredibly low sales price.

Eventually Edsel Ford came onto the scene with his passion and flair for the finer things in life, and soon became responsible for the refined, elegant styling that made Lincoln one of the premier motor vehicles in the world. Hand selected by Edsel and produced by Gorham, an auspicious greyhound mascot was mounted to the Lincoln Model L Towncar in 1929.

Coachbuilder Judkins was responsible for the bodying of the Model L. Powered by a flat-head V8 engine of 358 inches, the Model L was capable of delivering 90 horsepower through a 3-speed manual transmission. By 1923 the 136 in, version was the only one left while the 130in wheelbase was dropped. In 1925 the Model L was being shaped into a truly exquisite vehicle under the skill and direction of Edsel Ford's designs in 1925. Minor styling updates were very apparent.

Edsel also became the first luxury car builder that made custom bodied vehicles during the mid-20's that were directly available in catalogue form that was from the automaker itself. Custom body manufacturers were also used extensively which resulted in the increase of more styling improvements and updates. The most exclusive and expensive Lincoln model cost $7200 in 1925.
Having created a reputation in 10 years which Cadillac, Packard and Pierce-Arrow had attempted for nearly 30, Lincoln rounded out the model run of the L in 1930. A more refined V8 and available 120 HP in the Model K eventually replaced the Model L in 1931. The Model K also featured duo servo brakes and 145 inch wheelbase.

Equal to the finest vehicles in the world, the Lincoln had very clearly established itself as a producer of luxury vehicles. (Ironically enough, the most consistent competitor that Lincoln has faced for decades has remained Cadillac, a company that was also founded by Henry Leland.)By Jessica Donaldson

This Lincoln Model L carries the original body tag 'Type 147-B No. 1-177' with coachwork by Raymond Dietrich in the Berline Limousine bodystyle. It has a landaulet folding rear portion, a dual wind-up clock (one in front and one in rear), rear smoki....[continue reading]

Lincoln's seven passenger sedan was popular with both families and businesses. This is the family version. It was also available with a division window and chauffeur's compartment, which would be trimmed in leather.....[continue reading]

This handsome early and quite formal Lincoln was delivered new to Hollywood movie magnate Jack Warner and has been seen in several films. It eventually was displayed in the Cars of the Stars Museum. It was brought to the 2009 Pebble Beach Concours d'....[continue reading]

By 1926, under the guidance of Edsel Ford, Lincolns were offered with a wide variety of custom bodies. Among these was the Type L-137 Brunn Cabriolet, a formal town car that allowed a gentleman to wear his top hat inside the car even with the rear pa....[continue reading]

Total 1926 Lincoln Model L production: 0
© 1998-2020. All rights reserved. The material may not be published, broadcast, rewritten, or redistributed.