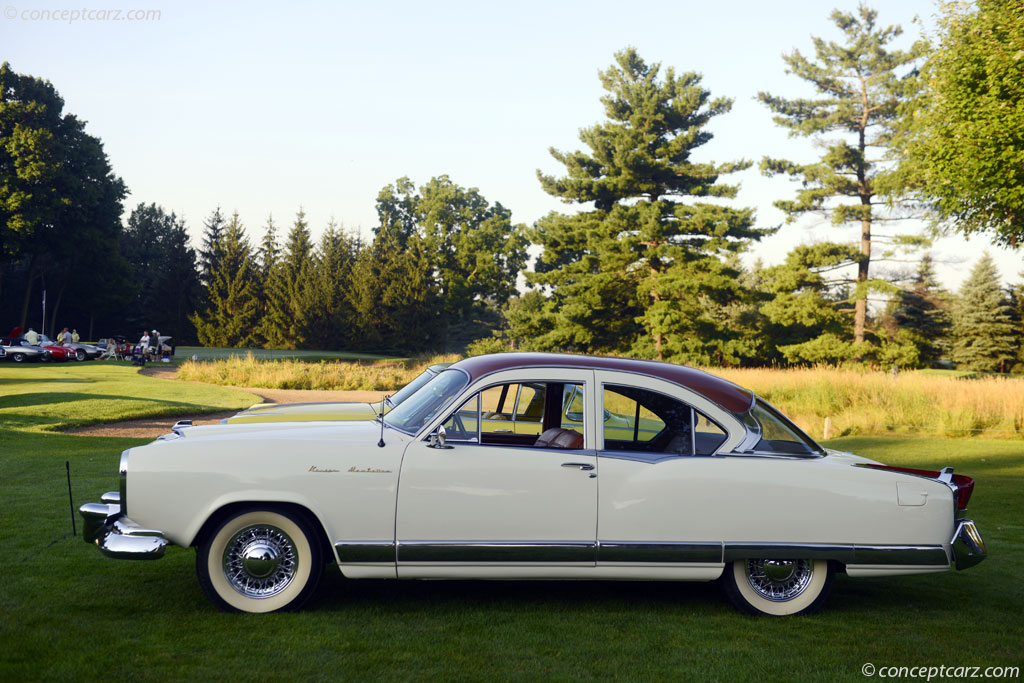 When World War II came to a close, shipbuilder and industrialist Henry J. Kaiser entered the automotive industry, teaming with Graham-Paige executive Joseph Frazer. The newly formed Kaiser-Frazer Corporation acquired the automotive assets of Graham-Paige. When Frazer left the company in 1951, the company was renamed the Kaiser Motors Corporation and remained in business through 1955.

Kaiser-Frazer displayed two new cars at the Waldorf Astoria Hotel in New York City in 1946, with the Kaiser utilizing a front-wheel-drive design while the Frazer had conventional rear-wheel drive configuration but intended to the more upscale market segment. The front-wheel-drive version did not enter production due to complexity and development costs. Instead, the new 1947 Kaiser and Frazer models shared powertrains and bodies, with differences confined to the exterior and interior trim. They would continue to share bodies and engines through 1950.

The Kaiser and Frazer models were among the first post-World War II automobiles to wear all-new styling, beating the 'Big Three' to market. (The 'Big Three' vehicles had pre-war styling).

When Kaiser began using the Manhattan name, it represented the top trim level within the lineup. The Virginian name was also new for 1952, which were essential 1951 Kaisers but wearing different fender badges along with 1952 data plate codes. Although all 1952 Kaisers rested on a 118.5-inch wheelbase platform and had nearly identical lengths, the Virginian was considered a separate series from the Deluxe and Manhattans. The Manhattans received the styling features of the 1952 Deluxes including a grille with a large full-width bar that traversed horizontally across the front of the car. Underneath it was a large 'bridge' type grille guard that carried the license plate. In the back was a larger bumper with chrome pods on each end. They had the words 'Kaiser Manhattan' on the sides of the front fenders, and the bodysides were accented by wide chrome trim along the bottom of the body. Standard equipment included full carpeting, Deluxe steering wheel, chrome horn-blowing ring, Deluxe instrument panel, and padded crash pad. The same five body styles were offered in 1952 on the Deluxe and Manhatten, reducing down to three for 1953.

The standard engine powering all 1952 Kaiser models was an L-head, inline-6 with a 226.2 cubic-inch displacement, cast-iron block, a Carter two-barrel carburetor, solid valve lifters, five main bearings, and developing 115 horsepower at 3,650 RPM. A three-speed column-mounted transmission was standard equipment, while an overdrive transmission was a US$98 option, and a Dual-Range Hydra-Matic four-speed automatic was $US179.

The 1954 Kaiser lineup included the Special, Supercharged Manhattan, and the kaiser Darrin two-door sports convertible. The Manhattan and Special wore similar styling, and both were offered as a sedan or club coupe. Both the Special and Manhattan continued to use the 226.2 CID six but the supercharged version of the Manhattan delivered nearly twenty additional horsepower, rated at 140 bhp at 3,900 RPM.

The Manhattan was the only model offered by Kaiser in its final year of production - 1955. In its final year, it received only mild updates including a slight increase in the center find decorating the simulated hood scoop, along with the addition of two smaller side fins. Body styles included a sedan and club sedan with prices of approximately $2,620. The standard engine was the supercharged 226.2 CID inline-six with 140 bhp.

In its final year, Kaiser built 1,231 vehicles with 1,021 going to Argentina and the remaining 210 cars sold in the United States. An additional 270 leftover vehicles were later retitled as 1955 models.

The tooling and assets were sold to IKA, in Argentina, where the Kaiser was built from 1958 through 1962. These vehicles were built at a factory in Santa Isabel in the province of Córdoba with the Kaiser Manhattan being rechristened the 'Kaiser Carabela' — named after a type of Portuguese sailing ship. Instead of using the vinyl and fabric interior of the US, the Argentine-built Kaiser employed a more rugged leather interior, and the speedometer was recalibrated in kilometers. Additionally, the oil, temperature, and fuel gauge annotations were done in Spanish. An automatic transmission was not offered.
by Daniel Vaughan | Feb 2021

In 1945, Henry J. Kaiser and Joe Frazer formed the Kaiser-Frazer Corporation with the purpose of creating an economical, light-weight, and innovative vehicle. When Henry J. Kaiser began production of the Manhattan, his goal was to produce a safe vehicle. This was accented by the vehicles bumpers, low centre of gravity, excellent field-of-view for the driver, and more. The design updates were courteous....
Continue Reading >>

(MAHWAH, N.J.) - September 12, 2013 - The 2014 model year continues the most dynamic product development and introduction period in the brands history. An all-new Range Rover Sport is introduced, based on the all-new aluminum-intensive Range...