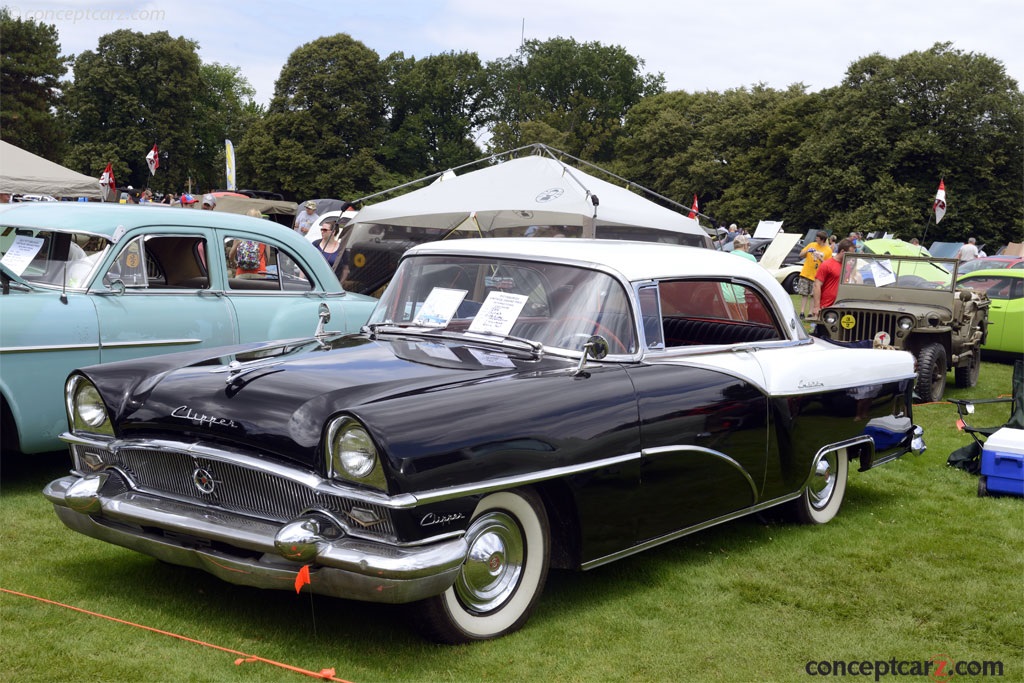 The 1955 through 1956 Packard models were the last produced in Detroit by the carmaker, and it is unfortunate that the company slipped out of existence just as it was introducing some of its finest work. The 1950s were among the best-handling full-size cars of the era, reportedly, even prompting Chrysler to rethink its own 'Torsion-Aire' design. Although late to the game, Packard introduced a pair of modern overhead-valve V-8 engines with the 1955 Packards, with displacement sizes of 320- and 352-cubic-inches, providing 225 and 275 horsepower respectively. The Ultramatic automatic transmission with a locking torque converter provided the ease of operation of an automatic coupled with the performance and economy of a manual unit. The 1955 Packard Clipper bodies featured wraparound windshields, hooded headlights, a new grille, and many exterior colors and upholstery choices. The 'high-pocket' design language of the entire 1955 Packard model range was penned by Richard Teague (now chief stylist at Studebaker-Packard Corp.), who later became head of design at American Motors. The Clipper nameplate, first used in 1941, succeeded the Packard 200 series for 1953-1956 as Packard's entry-level model. The Caribbean Convertible remained the company's image leader and top-of-the-line model.
For 1955, the Packard Clipper was offered in Deluxe, Super and Custom trim levels, plus the Super Panama and Custom Constellation hardtops. The 38,684 combined sales accounted for 70-percent of Packards total sales for 1955. Nameplates help distinguish the trim levels, located on the rear deck. Deluxe trim levels had small hubcaps and were devoid of rocker panel moldings. The Supers had bright metal steps on the rockers, chrome wheel discs, and plusher nylon and vinyl interiors.
Pricing for the Packard Clipper began at $2,590 for the Deluxe Sedan and rose to $3,075 for the Clipper Custom Constellation Hardtop Sport Coupe. The Clipper Custom models had chrome wheel discs, fender skirts, and rocker panel moldings. The Constellation model did not have skirts, but rather a chrome molding on the fender openings.
By Daniel Vaughan | Sep 2016

When the Packard Company began automobile production in 1899, it was known as Ohio Automobile Company. In 1903 the name was changed to the Packard Motor Car Company when it moved from Warren, Ohio to Detroit, Michigan. The move was the result of a majority stock purchase made by investors in the Detroit area. Packard had sustained a Great Depression and a World War and was still at the fore-front....
Continue Reading >>