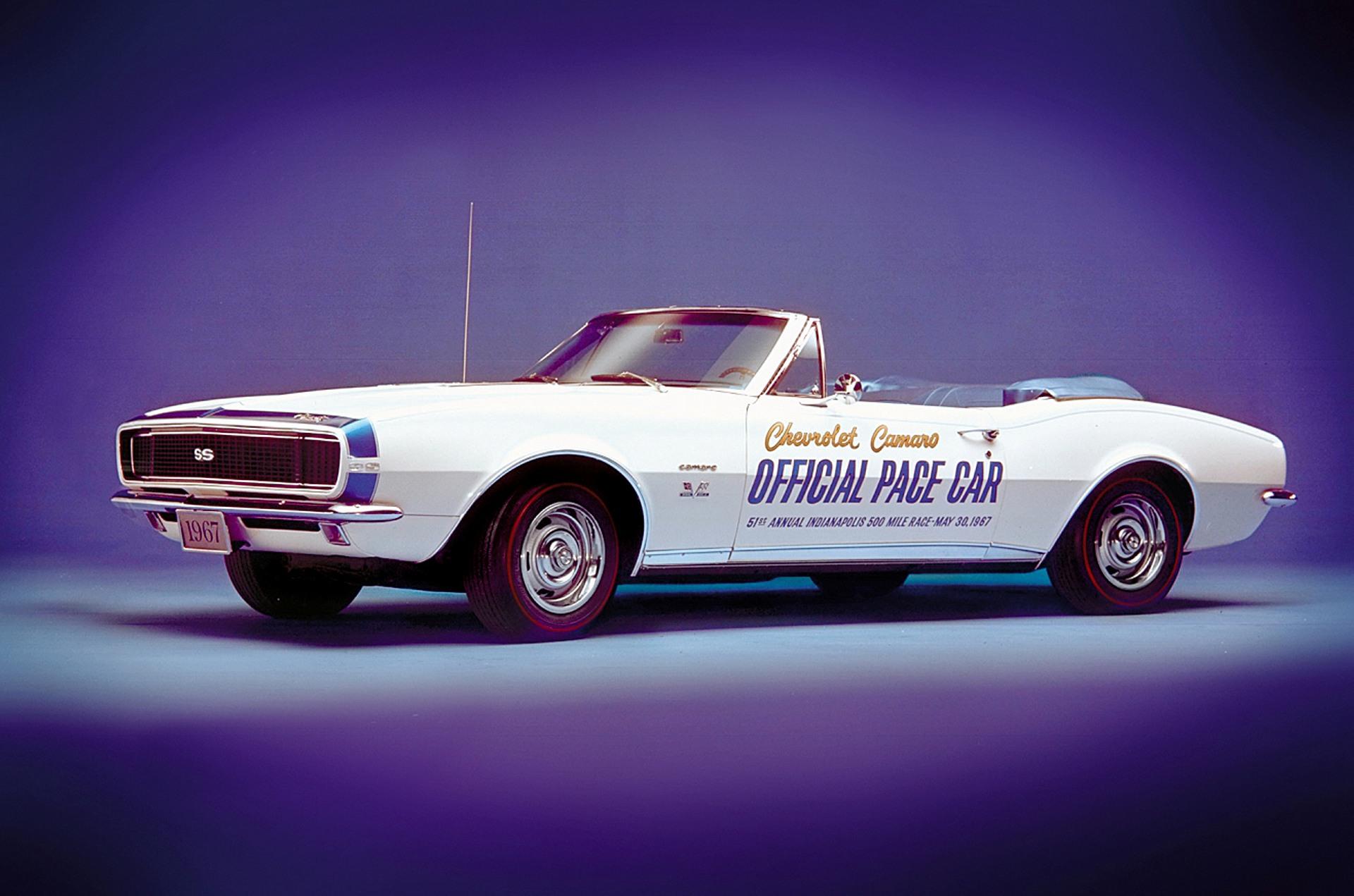 The Chevrolet Camaro has roots that date back to 1962 when then-Chevy design chief Irv Rybicki suggested a small 'personal car' based on the Chevy II. At this point in history, Chevy had a wide and diverse lineup, and General Manager Semon 'Bunkie' Knudsen was unconvinced, feeling that the Corvair, Chevy II, and the upcoming Chevelle had the bases well covered. Undeterred, Rybicki continued to work on proposals, and his 'Super Nova' was introduced to the 1964 New York Auto Show, a few weeks prior to the Mustang's introduction. After 100,000 Mustangs had been sold, firmly establishing the pony car market, GM management was eager to revisit the Super Nova proposal. The rush was on to develop a pony car in less than two years. Other history states that the Camaro was designed as a replacement for the rear-engine Corvair and not a belated General Motors response to Ford's Mustang. Either way, the Corvair needed a replacement and the Mustang needed a Chevy contender.

The Chevy Camaro had a similar unibody design and mechanical setup as the second-generation Chevy II. There was a stub frame ahead of the cowl (a unibody structure from the windshield and firewall back), an independent front suspension with double A-arms from the Chevelle, and the single-leaf rear springs from the Chevy II. For 1967, the engines and transmissions were from the company catalog, with seven engine options, ranging from a 230 cubic-inch, 140 horsepower six to a 396 cubic-inch, 375 bhp V8. A myriad of transmission and axle ratios were available to suit a wide range of driving needs and conditions. Exterior could be changed, customized, and enhanced with a Style Trim Group consisting of chrome and stripes. Additionally, there was the Rally Sport option with disappearing headlamps and special taillights.

From its debut in late 1966, the Camaro was value-priced from just $2,466 for the basic six-cylinder hardtop coupe and available with a wide range of option packages. The large engine bay could accommodate the thrifty sixes and lightweight small-blocks all the way up to the Mark IV big-blocks.

Introduced on September 12th of 1966, the Chevy Camaro was available either as a convertible or a coupe. Nearly 221,000 examples were sold with about a quarter being soft tops; three quarters were V8s. By now, sales of the Ford Mustang had begun to stall, reflecting the greater variety of competitors in an increasingly diluted and crowded market for sporty personal cars in America. The showroom battle would soon be taken to the track, but first, they needed to homologate their racing contenders for competition. Vince Piggins was instrumental in the development of GM Division's new SCCA Trans-Am racing contender, the RPO (Regular Production Option) Z/28 option package which was quietly introduced for the Camaro in 1967.

Along with a successful Trans-Am campaign, the Camaro did well at the drag strip, being a solid 14-second car in stock trim with low-13s achieved with narrow slicks, lower rear-end gears (3.73:1 standard), open headers, and expert tuning. One of the famously prepared cars of the era was Dave Strickler's Bill Jenkins-prepped 'Old Reliable' Z/28 which ran 11.70s in Super Stock trim, capturing the 1968 NHRA Super Stock World Championship.

In 1962, General Motors had issued a company-wide edict prohibiting the use of engines larger than 400 CID in their production sports cars. A handful of custom builders swapped the small-block 350 CID stock motor for something more powerful. One such tuner was Southern California race car engineer Bill Thomas who installed the 427 CID Chevy L72 crate motor into a Camaro before the model officially went on sale. His sponsored driver, drag racer Dick Harrell, soon teamed with Chicago dealership Nickey Chevrolet to produce a small series of similarly modified cars.

Nickey later backed out of the agreement, so Harrell approached his old friend, Don Yenko, the owner of a Chevrolet dealership in Canonsburg, Pennsylvania. Yenko had participated in road racing and tuning throughout the 1950s and early 1960s, most famously with a dealer-modified Corvair known as the Yenko Stinger. In 1966, Yenko had applied for SCCA approval of the Corsa Corvair for racing. The sanctioning body permitted the cars with the back seat removed and upgrades to the Corsa engine, thereby increasing horsepower and torque. A total of 100 examples of the 1966 Corvair Corsa received certification and were all painted white with blue striping, and were called the Yenko Stinger. When the Corvair was discontinued, Yenko needed a Chevy product that could fill the void. Harrell's proposal for the big-block Camaro perfectly suited his needs.

A handful of Camaros were delivered to Yenko with Chevy's small-block 350 CID motor, which was then swapped out in Yenko's shop for a new 427 CID L72 engine. Other modifications included a lower gauge package under the center stack, a Stewart Warner tachometer, exhaust headers, and '427' numerals installed on the hood or front fenders. Some cars received a custom-created fiberglass stinger-style hood, modeled after the one the 1967 Corvette wore. Each completed car was given a stock number, bearing a YS (for Yenko Sportscars) followed by a 7 (representing the 1967 model year) and then two digits, representing the car's sequence number. Other Chevrolet dealerships as far away as Utah and Oklahoma to Ontario, Canada, could take and place orders for these special Camaros. The 396 CID Turbo-Jet V-8 that GM made available in Camaros later in the model year was more compatible with the L72 motor, so Yenko soon began ordering the big-block Super Sports, salvaging their cylinder heads and carburetors, and re-mounting them on the L72's short block. Roughly 54 examples of the modified Yenko Camaro's were produced for the 1967 model year.

Chevrolet offered various combinations and performance packages on the Camaro, but due to their late arrivals, the Super Sport and Rally Sport packages were not well advertised in 1967, and very few were produced. The Rally Sport had hideaway headlights, and the SS came with Camaro's new 325 horsepower. They could be ordered separately or together. As one-period advertisement proclaimed, 'Take a Camaro sport coupe or convertible. Make it a Rally Sport with hideaway headlights. Make it an SS with Camaro's new 325-horsepower engine. Or both: SS with Rally Sport equipment.'
by Daniel Vaughan | Feb 2020

The 1960s, for better or worse, were all about breaking rules and graying areas of black and white. Don Yenko would be one such man that would make a living and become quite famous living in this area of ambiguity. The result of his work in this area....[continue reading]

The 1967 Chevrolet Camaro Z28 Number 96 was ordered from Jack Douglass Chevrolet by Motor Sport Research Inc., located in Des Plaines, Illinois. The MSR shop started in June of 1967 to prepare the car for Trans-Am competition. MSR got into some fin....[continue reading]

It would a very worthy opponent to provide competition in sales for Ford's Mustang. Chevrolet attempted to knock the Mustang off its high-horse as the world's most popular pony car with their F-Body Camaro. It was attractive, sporty, and available ....[continue reading]

The Chevrolet Camaro was introduced in 1966 and soon became a winner on the SCCA Trans Am Racing Circuit. Officially, General Motors had banned racing, but their engineers were still anxious to re-enter the scene. The answer was the Camaro, and it ....[continue reading]

Recently retired from race driving, Roger Penske teamed with driver/engineer Mark Donohue to build a Camaro (a Z28) into a Trans-Am racecar. The first car was unstable but when Chevrolet pushed a set of stamped 'thin-steel' body panels out the back d....[continue reading]

Nickey Chevrolet in Chicago, Illinois is known as 'The Original Super Car Headquarters' for good reason. In addition to being one of the highest volume Chevrolet dealers in the country in the 1960s, they built an incredible following of performance e....[continue reading]

Camaro car number 7 was delivered to Alan Green Chevrolet in the Pacific Northwest and was immediately entered in the 1967 Sebring 4-hour Trans-Am race. It DNF'ed. It was then sent to Bill Ellis Racing in North Wikesboro, North Carolina to be race pr....[continue reading]

For the 1967 Indianapolis 500 it was Chevrolet's turn to supply the pace car - to be driven on the day by Mauri Rose with Tony Hulman riding shotgun. The car's provider usually then built some replicas to celebrate the great honor. Sometimes this mea....[continue reading]

In 1967 the muscle car wars, and particularly the Pony Car wars, were really heating up. Playing 'catch-up,' Chevrolet knew they had to go a step further to get a piece of the youth market, hungry for exciting cars like the Mustang introduced in mid-....[continue reading]

This car was built as General Motor's answer to the Ford Mustang, N100001 was built as the first Pilot Prototype Camaro. This process began at the end of the second week of May in 1966...approximately 90 days prior to regular production beginning at ....[continue reading]

Out of the box, the 1967 Chevrolet Camaro wasn't much of a race car. That is, until Roger Penske and his star driver/engineer Mark Donohue got hold of it. This is the fourteenth Z28 built by Chevrolet and the first of six Sunoco Camaros built by Pens....[continue reading]

1967 was the first year for the Camaro. The 'Z28' was Chevrolet's entry into the 'pony car' market. The 290 horsepower (or at least that is what Chevrolet told the public) 302 cubic-inch V8 had a limited production run of 602 vehicles during its firs....[continue reading] 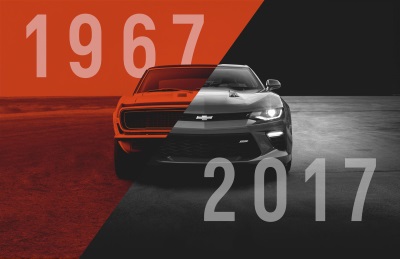 Historic birthday highlights a legacy of achievement for Camaro to build upon for years to come DETROIT — Fifty years ago today, on Sept. 29, 1966, an American icon was born when the very first 1967 Camaro was sold. To commemorate this... 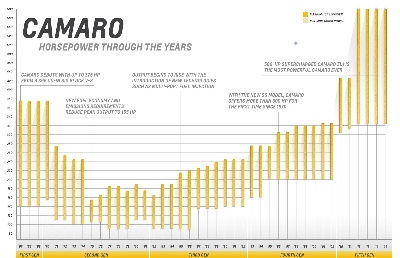 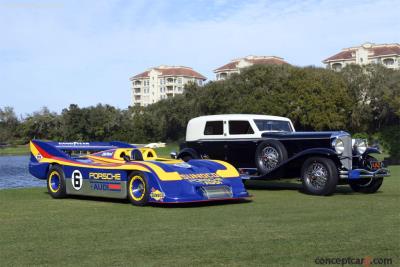 Jacksonville, FL - A 1929 Duesenberg J-218 Town Limousine and 1973 Porsche 91730 Can-Am Spyder were crowned this years Best in Show on March 8, 2020 at the 25th annual Amelia Island Concours dElegance. In celebration of the events Silver Anniversary,... 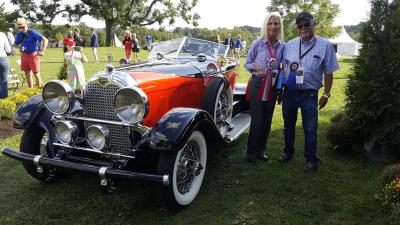 HILLIARD, Ohio (March 29, 2016) - American Honda Motor Co., Inc., will support the RRDC Evening with George Follmer presented by Firestone by hosting the cocktail reception on April 14 for the seventh consecutive year at the Road Racing Drivers...

George Follmer to be honored by RRDC in Long Beach

HILLIARD, Ohio (March 2, 2016) - George Follmer, the only driver to have won both the Trans-Am and Can-Am championships in one year (1972), will be honored by the Road Racing Drivers Club at the RRDC Evening with George Follmer presented by Firestone...