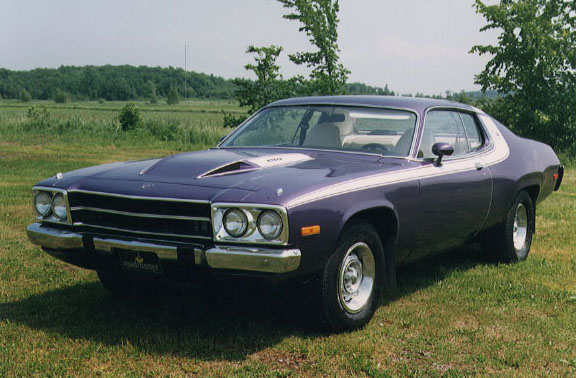 Introduced in 1965 as the top model in Plymouth's mid-size Belvedere line, the Plymouth Satellite used Chrysler's mid-size B platform.

The Satellite was available with the newly optional 'Street Hemi' engine in 1966. This engine came compete with the two 4-barrel carburetors and 10.25:1 compression. This body style remained for the following year with only minor trim changes.

All mid-sized Plymouths carried the Satellite name from 1971 to 1974. Hardtop coupe models had the 'Sebring' suffix.

The Satellite name disappeared when the Fury name was given to Plymouth's mid-size models for 1975.
In 1965 a larger more updated Plymouth Fury was presented to the public on Chrysler's full-size C platform. The Plymouth Belvedere title was switched to Plymouth's mid-size line, really a continuation of the full-size 1962 to 1964 models. The top trim model of the series with the Belvedere Satellite, available as a two-door hardtop or convertible with bucket seats.Similar to the Fury, the simple front end carried a single headlight on each side and had a grille that was divided into 4 thin rectangles laid horizontally.1968 brought a higher trim Sport Satellite model at the same time the Belvedere name was downgraded to low-trim base models. Continuing on this body, only minor rear and front restyling was done in 1970. The Belvedere discontinued this year.
The Satellite adopted a new ‘fuselage' styled body that had different wheelbases, sheetmetal for two and four door models as significant updating and restyling was accomplished for the 1971 model.
Two door models, base coupe with non-roll-down rear windows were called Satellite. In 1973 the two-door models received a conventional front end, along with squared up sheetmetal and rear side windows. Satellite Sebring, Satellite Sebring Plus came in base, Custom or wood-trimed Regent models, and Sedans were available in base, Custom and Brougham trim. 1974 Sedans and wagon models had large 5mph bumpers.
The Satellite continued on steadfast until 1974 where the nameplate was retired.By Jessica Donaldson

638,075 total vehicles produced by Plymouth in 1967
Total 1967 Plymouth Satellite production: 0
© 1998-2020. All rights reserved. The material may not be published, broadcast, rewritten, or redistributed.