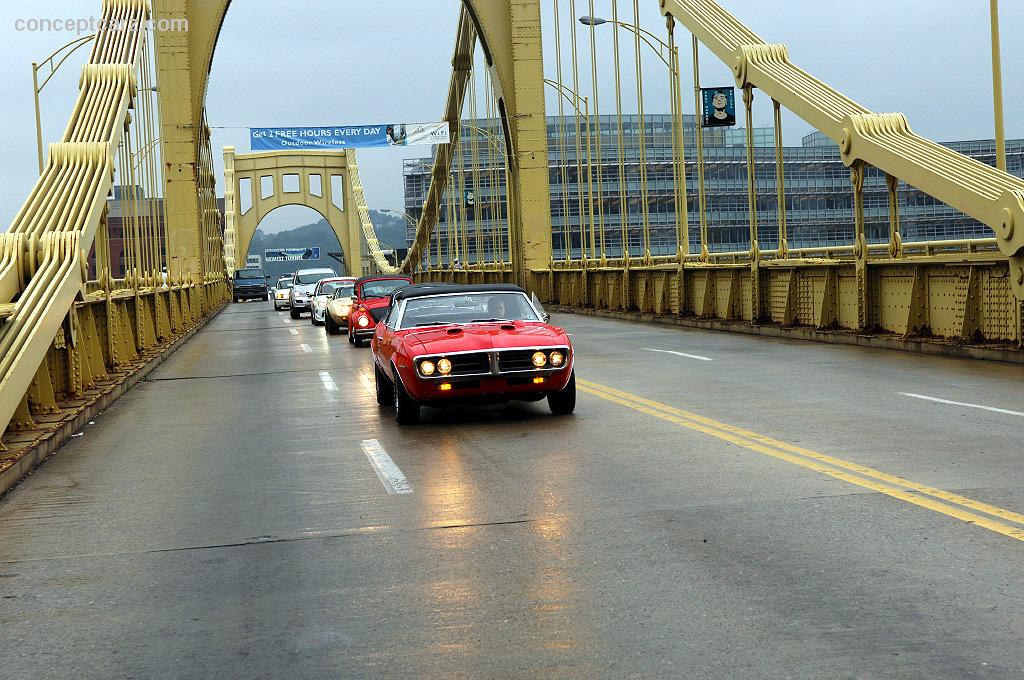 The new Pontiac Firebird was officially introduced on February 23rd of 1967 and produced to 2002. The Firebird featured new styling, twin grilles of a bumper-integral design, three vertical air slots on the front edge of the rear body panels, and vent windows in the front. A hardtop coupe or convertible body style was available and came with any of the Tempest or GTO powertrains. The six-cylinder engine displaced 230 cubic-inches and offered 165 horsepower. Most buyers selected V8 engines. The 326 CID V8 had a two-barrel carburetor delivering 250 horsepower; the 'H.O.' (High Output) version with the same displacement, but with a four-barrel carburetor, delivered 285 horsepower. The 400 CID From the GTO boosted power to 325 hp. A 'Ram Air' option became available in 1968, providing higher flow heads with stronger valve springs, a modified camshaft, and functional hood scoops. Power for the Ram Air package was the same as the conventional 400 H.O., but the engine peaked at a higher RPM. The 230 CID V8's were subsequently replaced by 250 CID ones, with a single-barrel carburetor and 175 horsepower, and the other 215 hp with a four-barrel carburetor. The 326 CID engine was replaced by one with a displacement of 350 CID in 1968. Also in 1968, an 'H.O.' version of the 350 CID with a revised camshaft became available, developing 320 horsepower. The power output of the other engines was increased marginally. In 1969, a $725 optional handling package called the 'Trans Am Performance and Appearance Package,' named after the Trans Am Series, added a rear spoiler. The 350 'H.O.' engine was revised again with a different cam and cylinder heads resulting in 330 hp.Pontiac produced 67,032 examples of the coupe and just 15,528 of the convertible for 1967. Pricing for the coupe began at $2,660 while the convertible sold for $2,900. The Firebird rested on a platform that measured 108 inches and had a length of 188.4 inches.Pontiac had originally hoped to produce a car based on the original Banshee concept car, however, GM feared it may directly compete with the Chevy Corvette. Instead, they were given an entry into the pony car market by sharing the F-body platform with Chevrolet. The Firebird was introduced the same year as the automaker's platform-sharing model - the Chevrolet Camaro. Its introduction coincides with the release of the 1967 Mercury Cougar, which shared its platform with the Ford Mustang. The Firebirds used several different engines from nearly every General Motors division until 1982 when GM began to discontinue engines that they felt were unneeded and either used new engines of corporate architecture or distributed successful designs from individual divisions among all divisions.
Styling for the first generation Firebirds used 'Coke bottle' designs, but unlike its Chevy Camaro cousins, its bumpers were integrated into the design of the front end and its rear 'slit' taillights were similar to the Pontiac GTO. The convertible and two-door hardtop body styles would remain available through the 1969 model year.
By Daniel Vaughan | Jan 2012 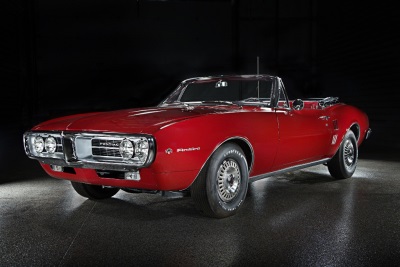 The 1967 Pontiac Firebird #001 (preview) and #002 (preview) are the first two Firebirds ever built by Pontiac and will be sold as a pair. Other highlights include a matching-numbers, all-original 19...