Sold for $467,500 at 2006 The Otis Chandler Collection Auction.
Sold for $352,000 at 2010 Gooding and Company - Scottsdale Auction.
By 1909, Pierce-Arrow had earned a solid reputation for quality, durability, and style. They had become the preferred transport of America's social elite. They added three additional chassis types for 1909, plus a new four-speed gearbox with outboard shift, and updated fenders. The public responded and sales rose from 552 units in 1908 to nearly 1,000 in 1909. Another high point for the company in 1909, was that it began a tradition as being the official car of the White House.Pierce-Arrows were innovative and renowned for utilizing components made from expensive and exotic materials such as Krupp chrome-nickel axle shafts, aluminum coachwork, and a manganese bronze differential case. The engine had six cylinders that were cast-in-pairs with bearings installed between each, creating a very rigid crankshaft.Pierce-Arrow produced 956 cars for 1909, with 362 of those being the legendary Model 48.
This example is one of the earliest known Pierce-Arrows in existence, and was the twelfth example built. It has never been comprehensively restored. Power is from a 453 cubic-inch T-Head six-cylinder engine fitted with a single updraft carburetor and offering 48 horsepower. There is a four-speed selective sliding gearbox and two-wheel mechanical drum brakes with additional braking on the transmission.
In the mid-1980s, this car became part of the Matt and Barbara Browning's collection of antique and classic Pierce-Arrow automobiles. During time in their ownership, the car was completely restored and then taken by them to the 1988 Pebble Beach Concours d'Elegance where it was awarded a First in Class (Pierce-Arrow through 1915). Years later, the car became part of the Otis Chandler collection. The car is finished in a deep, rich maroon, with period-correct Panasote top. Inside, there is a pebble grain diamond-tufted leather seating.In 2010, this Model 48SS Great Arrow was offered for sale at the Gooding & Company Auction held in Scottsdale, Arizona. The lot was estimated to sell for $350,000 - $450,000. As bidding came to a close, the lot was sold for the sum of $352,000, including buyer's reserve.
By Daniel Vaughan | Feb 2010

The year 1909 saw the official retirement of George Pierce and set the stage for Pierce-Arrow to debut improvements and models that would eventually elevate them to the top of the American luxury car market. Phasing out their 4-cylinder models and column-shift, 3-speed transmission, the new 48-horsepower, 6-cylinder chassis featured a four-speed transmission mounted 'outboard' to the right of the driver. 1909 also saw the largest output of cars, the most body styles available and the most models in the Pierce-Arrow catalog to that date. A buyer could choose from six different chassis and just about any body configuration they could conceive. This 48-SS 7 Passenger Touring exemplifies one of Pierce-Arrow's largest and most popular models; it features the 48 horsepower chassis that would become the foundation of the company's future success.
A win on Sunday meant strong sales on Monday. This was a motto many manufacturers believed in and thus, many automakers actively raced their cars to promote its capabilities. Pierce-Arrow did the same; to prove the cars durability and reliability, the mighty Pierce-Arrow was entered in the famed Glidden Tours. From 1905 through 1909, it won all five events and, except for one outing, earned perfect scores in all of them. The company handled all aspects of construction, including the coachwork, for their vehicles. This was highly unusual for the time, but Pierce-Arrow wanted to ensure high quality and maintain high standards on all facets of construction and assembly. They worked closely with their Buffalo, New York neighbor Aluminum Company of America to perfect casting techniques which produced cast-aluminum body panels as thin as 1/8-inch. This made them lightweight yet very strong. Pierce-Arrow established their own Art Department, long before GM recruited Harley Earl to create their 'Art and Colour Department.' Herbert Dawley designed the bodies for the Pierce-Arrow automobiles and worked closely with the clientele to ensure proper colors, materials, and accessories were fitted to the vehicles.Another venue the company explored for promoting their business was 'image.' They sought the business of prominent figures, including the White House where ever President from William Howard Taft through Franklin Delano Roosevelt rode in a Pierce-Arrow. Many famous movie stars of the time preferred the Pierce-Arrow, such as Mary Pickford, Tom Mix, and Gloria Swanson. This publicity generated a wealth of business for the company and its reputation continued to soar.
In 1906, Pierce-Arrow constructed an integrated factory in Buffalo that covered 1.5 million square feet on the site of the 1901 Pan-American Exposition.
In 1913, the Pierce-Arrow Company patented the design of 'headlights faired into the tops of the front fenders.' This improved the effectiveness of the headlamps and was first seen on a Model 48-B2. The Model 48 was available in two versions, the B and D. The D versions were equipped with a Disco acetylene self-starting system. The Pierce-Arrow Model 48 was powered by a 515 cubic-inch, T-head, inline six-cylinder, side-valve engine that produced 48.6 calculated ALAM horsepower. Its cylinders were cast in three pairs and featured two vertical plugs per cylinder. Half of the plugs connected to a coil while the other six were connected to a magnet. A switch gave the driver the ability to select either or both. The engine did not have a hand crank; there was an air-starting device which used compressed air stored in a tank to operate a small piston engine geared to the flywheel. Once the engine was started, the driver would reverse the valve, and the air-engine became a pump which recharged the tank. During the production lifespan of the Model 48B, a total of 825 examples were created, and each carried a price tag that ranged from $4,850 - $6,300 depending on body-style and coachwork. There were more examples of the Model 48B produced than their lower-priced companion car, the Model 38C, by 209 units. The Model 48 rested on a platform that had a wheelbase that measured nearly 12 feet. Braking was mechanical system that took some force to operate. Wooden artillery style wheels were at all four corners and wooden running boards were on either side of the car. The instrumentation inside was rather bare. The two more important gauges were the mile-o-meter and the drum-action Warner speedometer. The most popular body-style for the Model 48 was the Tourer which had a canvas top and had seating for around 7 individuals.
The Model 48 was a very stately and impressive car that had an awe-inspiring presence and a powerplant capable of carry the load. These were mechanical masterpieces and truly exception examples of the quality and caliber the Pierce-Arrow Company was capable of producing.
By Daniel Vaughan | Dec 2008 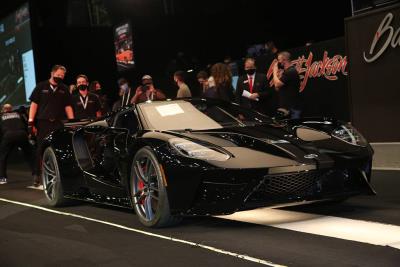 SCOTTSDALE, Ariz. – Oct. 26, 2020 – Barrett-Jackson, The Worlds Greatest Collector Car Auctions, returned to in-person events during the Fall Auction at WestWorld of Scottsdale, October 22-24, 2020, with a safe and highly successful auction. During... 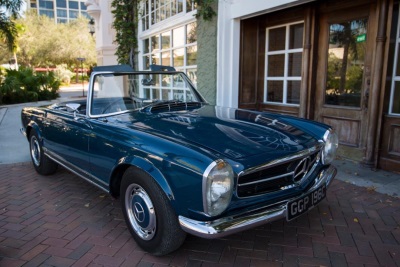 Auburn, Indiana. December 7th, 2016. Worldwide Auctioneers has confirmed today that Beatle John Lennons personal 1965 Mercedes-Benz 230SL will go under the hammer at its inaugural Scottsdale sale on Wednesday, January 18th. We are thrilled to...

Sixteen-year-old to Show Magnificent KB Dietrich Convertible at 2013 Pebble Beach Concours dElegance PEBBLE BEACH, Calif. (July 15, 2013) -- At 16, some teenagers get their drivers license, and a lucky few even receive a car. Emily...

2 total vehicles produced by Pierce-Arrow in 1909
Total 1909 Pierce-Arrow Model 48 production: 0
© 1998-2020. All rights reserved. The material may not be published, broadcast, rewritten, or redistributed.