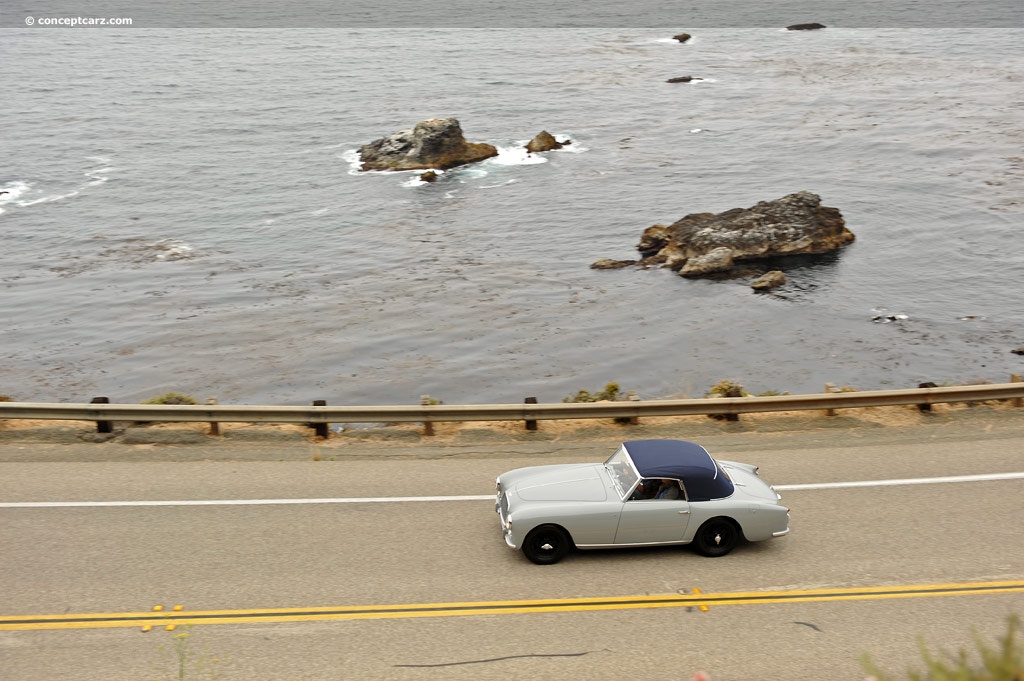 The Aston Martin DB2 was debuted to the public at the New York Motor Show. This was not the vehicles first appearance. It had been race at the grueling 24 Hours of LeMans where one of the drivers, Pierre Marechal, had been involved in a fatal accident. The DB2 was designed by Frank Freeley and configured as a two-seater touring vehicle. It was Aston Martin's first real production vehicle. The name was derived from the initials of the company's founder, David Brown. The production designs were very similar to the vehicles raced at LeMans, offering LeMans performance and touring comfort. Power was supplied by a twin-cam, W.O. Bentley designed Lagonda six-cylinder engine capable of producing 115 horsepower. With the 'Vantage' option that became available in 1951, the output increased to 125 horsepower, thanks in part to SU HV6 carburetors and high compression pistons.
During the DB2's lifespan lasting from 1950 through 1953, 441 examples were produced.

The DB2/4 had been modified both mechanically and aesthetically from its predecessor. The front received updates that gave it a 'cleaner' design. The 2.6 Liter Vantage engine was placed under the hood and provided power for the rear wheels. Due to the extra weight of the DB2/4 MK1, a more powerful 3.0 liter engine capable of producing 140 horsepower was used in 1954.

Under the hood sat a six-cylinder engine producing 162 horsepower. The zero-to-sixty time was now rated at 9.3 seconds with the top speed at 120 miles-per-hour. In standard form with the optional dual exhausts, horsepower was raised to 178 horsepower. By adding Webers, high compression pistons and an oil cooler, the horsepower rating skyrocketed to an astonishing 220. These improvements were courtesy of the knowledge Aston Martin had ascertained on the racing track.

From 1953 through 1955 there were just 41 examples of the hand-built DB2/4 Saloons created. The cars were created at the DB works factory in Farsley, while the aluminum bodywork was tasked to the legendary coachbuilder, Mulliner at Newport Pagnell. ....[continue reading]

One-of-a-kind Designed by Bertone's own Franco Scaglione, this unique body has a pronounced wraparound rear window and neatly creased fenders. The interior has a very unusual dash which looks more modern than that of the other Bertone built cars. Ori....[continue reading]

American Stanley 'Wacky' Arnolt commissioned the Italian coachbuilding company Bertone, of which he was a director, to build a Spyder body for the DB2/4 chassis, and he persuaded Aston Martin to let him have some rolling chassis to work with. In all,....[continue reading]

This 1954 Aston-Martin DB2/4 is one of 199 produced in 1954 and one of only 12 known to exist. It has had only three past owners and was found in the late 2000s in a barn in Falls Church, Virginia. It is currently undergoing a restoration which is ....[continue reading]

Herman Graber started as a coachbuilder in Wichtrach near Bern in Switzerland. During the 1930s Graber became world famous for his beautiful convertible and coupe body design and for his perfect craftsmanship. A total of six Aston Martin chassis rece....[continue reading]

This 1954 Aston Martin DB2/4 Saloon was completed in fall of 1954 and equipped with the updated 2.9-liter VB6J engine, a left-hand drive arrangement, heavy-duty Armstrong shock absorbers, a 3.73:1 rear axle ratio and KLG spark plugs. It was originall....[continue reading]