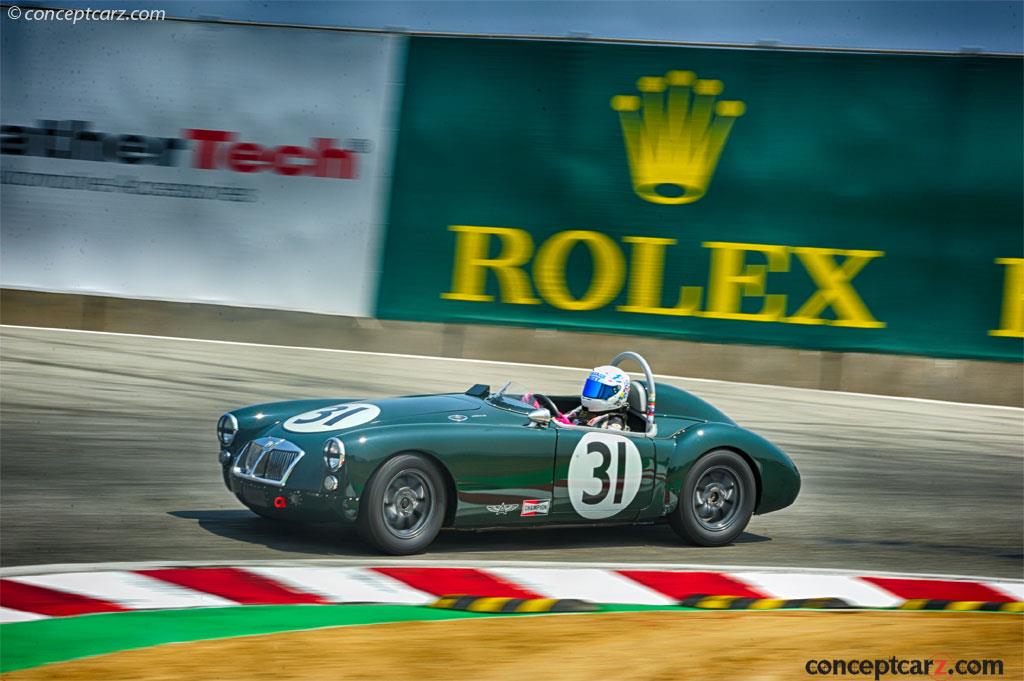 The MGA began production in 1955. The styling and mechanics were different from previous MG models. The public had been given hints of its new design during the 1951 Le-Mans 24 Hour endurance race. The car was driven by George Phillips and was actually a TD Midget with body modifications.

The XPAG engine that had power many previous MG's was replaced by a new power-plant. This 1489 cc four-cylinder, B-series engine provided between 68 and 72 horsepower. The BMC B-series unit had made its debut in the MG Magnette saloon and proved to be a reliable and powerful engine.

To create enthusiasm for the cars prior to release, three aluminum-bodied prototypes were created and dubbed EX182. They were entered into the Le Mans race where they finished fifth and sixth in their class. This epic achievement gave the MGA racing credibility and mechanical reliability.

The styling of the car was undeniably elegant. Its aerodynamic design and two-seat open-body were stylish and sporty. The vehicle sat very low to the ground providing an excellent center of gravity. This improved handling and cornering ability. The chassis was a modified TD Midget unit with widely spaced side rails allowing for a low-seating position.

Steel disc wheels were standard equipment but center-locking wire wheels could be substituted at an additional fee. Since the car had an open-top, it was subjected to the elements. A hard-top could be purchased making the vehicle more versatile.

A coupe version quickly followed and offered features such as wind-up windows, soft-top versions, and other amenities that helped appeal to a wider customer base. To stay competitive on the race track, the MGA twin-cam version was introduced in 1958. This high-performance version could be driven to the race track, race, and then be driven home. The engine had been modified with aluminum components, twin overhead camshafts, and dual SU carburetors. These enhancements increased the horsepower rating to 110 and the overall top speed to 115 miles-per-hour. Disc brakes replaced the drums which not only made the car more competitive, it made it safer. Unfortunately, the vehicle suffered from reliability issues and did not hold up well to the strain of racing. So in 1960, MG discontinued its production.

In 1959, MG introduced the MGA 1600's and offered them in a coupe and open form. These were the standard MGA cars but with 1588 cc B-series pushrod engines. Drum brakes were used in the rear of the vehicle, but disc brakes were placed in the front.

In 1961, the MGA 1600 MKII was introduced. It featured a 1622 cc. B-series engine that was capable of producing 93 horsepower. 100 miles per hour was easily achieved by the MKII. Minor aesthetic changes were made to the front and rear of the vehicle.

In 1962, MG ceased the production of the MGA. Nearly 100,000 examples had been produced during its life span making it the longest-running and best-selling MG. The success of the vehicle was in part to its styling, racing history, performance, and competitive pricing. Many of the MGA's produced were exported to the United States. In the end and after so many years, the MGA was having trouble staying competitive with models offered by other manufacturers.
By Daniel Vaughan | Jun 2006

MG produced the 'A' model from 1955 to 1962 as a roadster and a coupe. This 1962 is a Mark II Roadster, the only year that the MKII was produced. It is distinguished from the other earlier model A's by a recessed grille, the 1622 cc motor, vinyl co....[continue reading]

This Chariot red over black coupe is from the last year of MG A production and features a 1622cc B-Series engine and a 4:1 rear axle for lower revs at highway speeds. These last years of the MG A brought the Mark II cars and only 521 MK2 coupes were....[continue reading]

The MGA was the first sports car to sell 100,000 examples and this is the 100,000th one to be built. It was built as a show car for the 1962 New York auto show. After the show ended the car was shipped to a dealer in Nashville, Tennessee. The current....[continue reading]

The MGA was continually developed during its production lifespan, culminating with the Mark II 1600. Fitted with a 1,622cc four-cylinder engine, the rise in horsepower was accompanied by front disc brakes. The Mark II had twin-cam dashboard arrangeme....[continue reading]

This 1962 Sebring Deluxe Coupe, #52, was prepared in the Factory Competition Department for entry in the 1962 Sebring 12-Hour Race. The 1962 Deluxe Coupe represents MG's final appearance at Sebring with the MGA model and were the most highly modified....[continue reading]

Long thought to be lost to fire, this Factory Competition MGA Coupe (#53) resurfaced in the mid-2000s. A true barn find, it languished in a dirt floor garage for 4 decades. The last of the Factory Racing MGAs, GHN2/106074 is one of three lightweight ....[continue reading]

The MGA was the first sports car to sell in excess of 100,000 units, beginning with the earliest 1500cc XPAG-powered version. The MKII was given a new inline four-cylinder overhead valve engine displacing 1622cc and offering 90 horsepower. It was the....[continue reading]

The MGA design dates back to 1952, when designer Syd Enever created a streamlined body for George Philips' TD Le Mans car. The lower, modern streamlined look was a major departure for MG so it was given the MGA designation, the first of a new line. T....[continue reading]

The MGA 1600 Mk II was introduced in March of 1961 and was the final version of MG's popular sports car. The MK II was given a face-lift around the taillights and the grille, while retaining its classis Roadster silhouette and dimensions. The engine ....[continue reading]