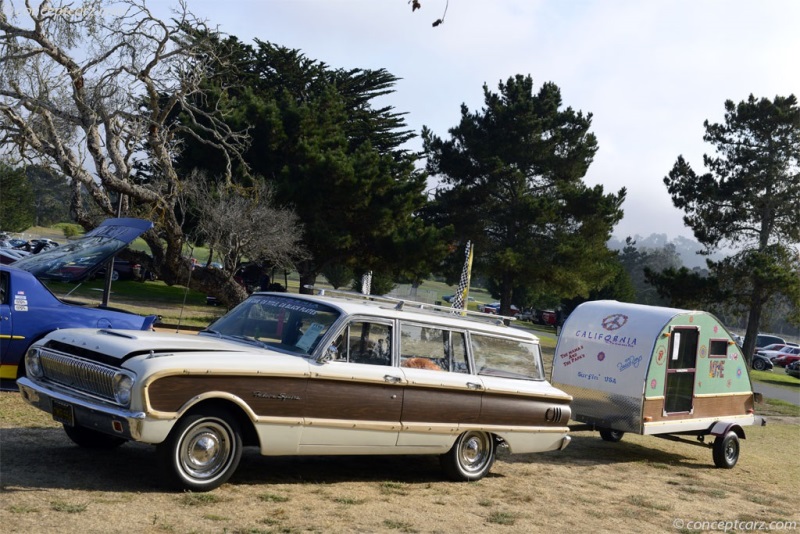 The Ford Falcon nameplate was introduced for 1960 and remained in production through 1970. During its lifespan, it served as a complete line of economical and highly versatile Ford compact models. Bodystyles ranged from 2- and 4-door sedans to station wagons, 2-door hardtops, convertibles, sedan deliveries, Ranchero car/pickup hybrids, and Econoline vans and pickups. Its chassis provided the basis for the Mustang in 1964.

For the 1962 model year, the Falcon received very few modifications in comparison to their 1961 siblings. In the front was a new convex grille that featured vertical bars. The Falcon line was divided into two lines for 1962 consisting of the Standard and Deluxe Series. The Deluxe models had been optional equipment on the 1960 and 1961 model years. Also joining the lineup in 1962 was the Falcon Squire station wagon. The most popular body style for 1962 was the 2-door sedan, which saw production reach 143,650 units in both standard and deluxe form combined. The 4-door version found 126,041 while the 2-door Futura Sedan saw the fewest sales (albeit, still a very impressive figure) of 17,011. The Futura models were similar to the 2-door sedan but with bucket seat interior and a center console.

The base engine was an overhead valve 144 cubic-inch six-cylinder unit delivering 65 horsepower. A 170 CID six was available, bringing horsepower to just over 100 horsepower. Transmission options included a three-speed synchromesh manual as standard equipment or an optional two-speed Ford-O-Matic.

The Ford Falcon served as an alternative to Ford's full-size cars, offering better fuel economy during the gas-supply era due to the Suez Crisis and recessions of the late 1950s. The Falcon was nearly three feet shorter than the full-size Fords and weighed considerably less. They were a blend of comfort and utility, with seating for up to six passenger, plus their cargo. The Falcon entered a competitive market that included the Rambler American lines, Chevrolet's Corvair, Chrysler's Valiant, and Studebaker's Lark. Nonetheless, over one million Falcons were sold by 1962.
by Daniel Vaughan | Feb 2015

This 1962 Ford Falcon 2-door Sedans finished in a blue exterior paint and has recently reupholstered seats and door panels. It has the correct original AM radio with a new replacement speaker. Power is from a 170 cubic-inch 6-cylinder engine offering....[continue reading]

This 1962 Ford Falcon Futura is powered by a 200 CID straight-six mated to a three-speed automatic transmission. It rides on new tires, and has new paint and interior. In 2015, it was brought to the Russo & Steele auction in Scottsdale, Az. where it ....[continue reading]

In just two years, Falcon sales reached over 1 million units. This particular example is a California Black plate example that has wood-grain side paneling, a single repaint in white and the original roof frack. It is powered by a 1980-vintage 200 cu....[continue reading]