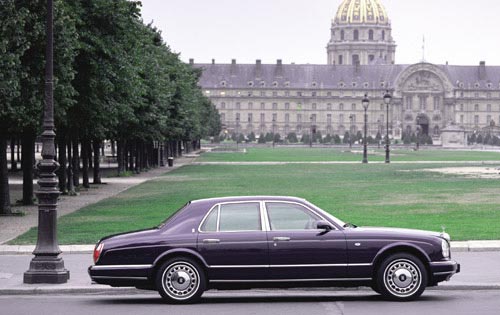 The Rolls-Royce Silver Seraph was produced from 1998 through 2002. The large luxury automobile wore a design by Graham Hull and first unveiled on March 3rd of 1998 at the Geneva Motor Show. The car served as a replacement for the Silver Spur, which ended production in 1997. Production of the Silver Seraph came to an end when the license to use the Rolls-Royce marque was sold to BMW. The Seraph was identical to the Bentley Arnage, with the exception of the radiator grille, wheels, and badges. They both shared the same body shell and platform. Power was from a BMW M73 5.4-liter aluminum alloy V-12 engine mated to a five-speed automatic transmission. It had a digital engine management system, anti-lock brakes, adaptive ride control, and was available in one and two-tone finishes. The seats and dashboard were upholstered in Connolly leather, with dashboard trim and folding picnic trays for rear passengers. By the time production came to an end in 2002, a total of 1,570 Silver Seraphs were built.
In 2000, the Silver Seraph received several updates including a slight increase in the rear dimensions. New equipment included a GPS navigation system, variable weight steering system, and Park Distance Control warning system. With the touch of a button, the exterior mirrors could now be folded in.
The Silver Seraph was kept an exclusive automobile by its very steep price tag of $219,900. Despite this price, it was still the least expensive vehicle in the lineup, which included the Park Ward Seraph Saloon and the Corniche IV Convertible Coupe.
By Daniel Vaughan | Apr 2019
Developed with help from the BMW Group and powered by a 5.4-liter BMW V12 engine, the Seraph was a far more modern car with up-to-the minute electronics controlling the adaptive ride control, five-speed automatic transmission and a plethora of safety equipment. Body stiffness was said to have improved by 65% producing a better ride, handling and increased drivability. The long wheelbase version was named the Park Ward.

The Silver Seraph was the last model to be built at Crewe and was effectively the first all-new Rolls-Royce since the launch of the Silver Shadow more than 30 years earlier.Source - Rolls-Royce Motor Cars Ltd.

Rolls-Royce Silver Seraph, 1998-2002Charles Stewart Rolls and Henry Royce first met in 1904, by which time Rolls had become impressed by a few cars that Royce had been able to produce. Henry Royce was an engineering genius who became a successful and entrepreneurial young man with a self-taught education. By the age of 19 he had established a profitable manufacturing firm that provided him....
Continue Reading >>