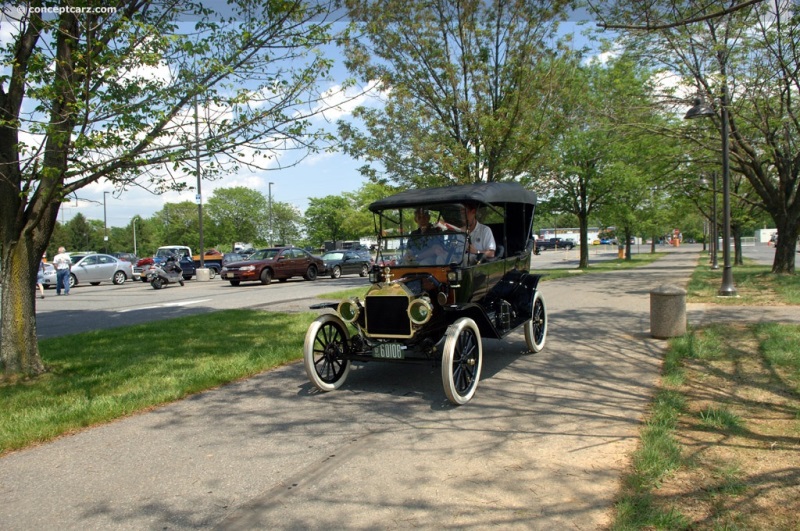 Ford's Model T radically altered American society by putting affordable transportation within reach of the majority of the population. The car sold millions of units and remained virtually unchanged for two decades. The 1913 Model is the last T ava....[continue reading]

This 1913 Ford Model T Speedster is powered by a 176.7 cubic-inch L-head cast-iron engine with four-cylinders capable of producing 20 horsepower. It has a two-speed planetary transmission with reverse, and sits on a 100-inch wheelbase. It was offer....[continue reading]

By the end of the 1912 model year, Ford had produced and sold nearly 160,000 Model T's and was the largest manufacturer of automobiles in America. In 1913, the Model T was redesigned with front doors and a new 'dog leg' style windshield was used to ....[continue reading]

Ford recognized the important of building commercial vehicles in 1912 and consequently produced a delivery van. The new van proved to be unsuccessful, however, as commercial vehicle purchasers wanted vehicles that were designed to suit their particu....[continue reading]

The Ford Model T was 'the car that put America on wheels.' It was in production, albeit with very subtle changes, for 20 years - from 1907 until 1927. During that time more than 15 million were built.....[continue reading]

Ford produced a 'Commercial Runabout', also called a 'Delivery Car', from 1910 through 1912. It had a flat rear deck used to transport light freight. Unfortunately, this vehicle was a 'sales disaster', so it was discontinued for the 1913 model year. ....[continue reading]

The Ford Model T 'Tin Lizzie' was introduced in October of 1908 and would remain in production for nearly 19 years with around 15 million examples built and making Henry Ford a household name, putting the world on wheels. January 1911 saw the introdu....[continue reading]