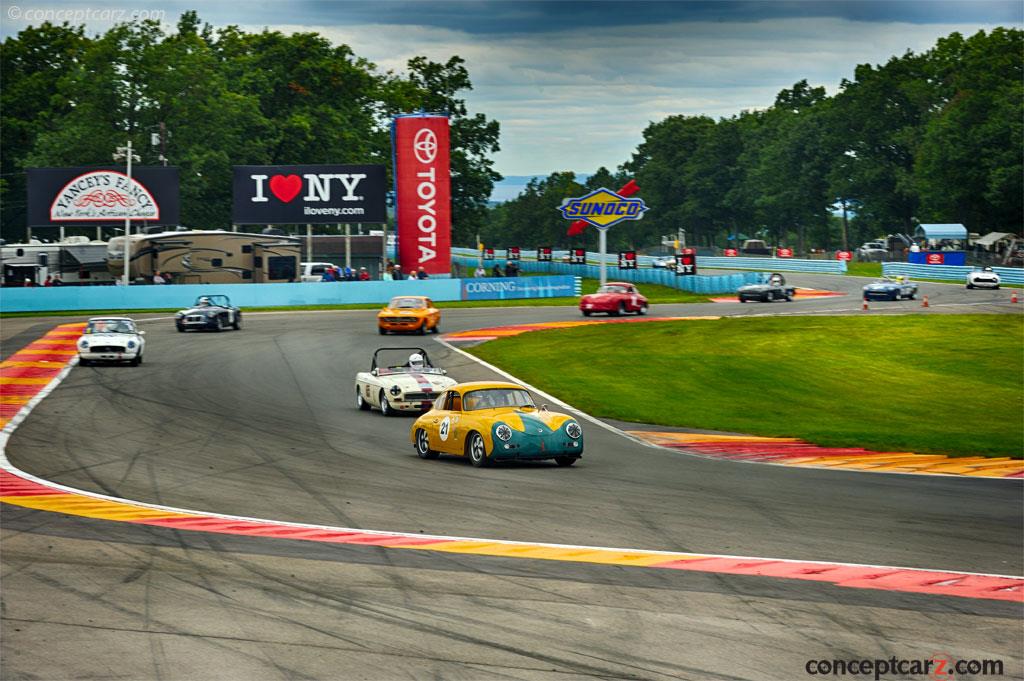 Ferdinand Porsche Sr. designed the Volkswagen Beetle and his son, Ferdinand 'Ferry', created the 356 which had a similar four-cylinder, air-cooled, rear-engine, rear-wheel-drive configuration with unitized pan and body construction. Erwin Komenda had created the completely new chassis design, while the engine and various other mechanical components were sourced from the Volkswagen.

The 1959 Porsche falls within the 'A' designation, Type 2 (T2). The 'Type 1' (T1) cars were built from late 1955 to 1956. Most examples received the 1,582cc 4-cylinder boxer air-cooled naturally aspirated pushrod OHV engine with 2 valves per cylinder valvetrain. Breathing was handled by dual downdraft Zenith carburetors while helped the engine produce 59 horsepower and 81 lb-ft of torque.

Late in 1954, Porsche introduced the 'Speedster' after Max Hoffman convinced management that a lower-cost, spartan open-top version could sell well in the American market. It would become one of Porsche's most successful models and remains one of Stuttgart's true icons. In mid-1958, Porsche sent a letter to all its foreign representatives, stating the four-year-old Speedster would be replaced by a new model for 1959, and it would be manufactured by Karosseriewerke Drauz, of Heilbronn. It was known as the Convertible D and was an interim step prior to the arrival of the 356 Roadster in 1960. It had Speedster-like styling with creature comforts that included wind-up door glass in place of side curtains, a taller windshield, a better top, and a more luxurious interior. The 'bee-hive' style lamps were replaced by new and larger teardrop-shaped taillights, and U.S. cars were equipped with bumper guards and over-riders. Porsche sales literature described the new Convertible D as 'a dynamic car of beautiful proportions. Extra light and low in design for competition and pleasure driving.'

Total production of the Convertible Ds, built between August 1958 and September 1959, reached 1,331 units. Nearly all were equipped with either the 60-horsepower Type 616/1 Normal engine or the 75-horsepower Type 616/2 Super. With a curb weight of less than 2,000 pounds, the Convertible D could reach 60 mph in a little more than 14 seconds in Normal form, and it was capable of topping 100 mph.

The 356 Carrera was introduced in 1955 at the Frankfurt Motor Show and was the first edition of Porsche's long-running performance car, powered by a special race-bred engine in development since 1952. Dr. Ernst Fuhrmann made fundamental engineering adjustments to Porsche's flat-four pushrod engine, including the addition of twin ignition, two twin-throat carburetors, and dry-sump lubrication. The biggest improvement was the implementation of dual overhead camshafts. A complex system of shafts and bevel gears kept the valves moving instead of the normal chain or belt-driven timing, improving the engine's reliability and precision.

The Type 547/1 engine was originally fitted in the 550s where the combination of lightweight construction and a potent powerplant proved to be an immense advantage over the heavier, larger displacement opposition. Eventually, the engine made its way into the 356-based road and competition cars, available in the coupe, cabriolet, and open speedster.

Porsche would continue to produce the Carrera throughout the various generations of 356, eventually increasing the displacement all the way up to 2 liters.

Built for just more than a year over 1958 and 1959, the Convertible D was Porsche's follow-up to the famed Speedster. It was considered a bit more 'grown up' than the Speedster; for example, a taller windshield and wind-up glass side windows contras....[continue reading]

In 1959, Porsche in San Francisco ordered six of the seven GT Speedsters built by Porsche. These cars were equipped with a push-rod 'super' motor rather than the more common Carrera 4-cam motor. Peter & Barbara Jones purchased the car in 1959 and own....[continue reading]

The Porsche 356A Convertible D ('D' referring to Drauz, the German coachbuilder that produced the new car's bodywork) was the answer to customers who wanted something more than a bare-bones vehicle. The new car had a higher windshield and wind-up doo....[continue reading]

The Convertible D with its wind-up door glass was offered for only the 1959 model year. They had well-padded coupe-style seats in place of the thin-shell Speedster buckets, a taller windshield, and an improved folding top. The rear cowling was reshap....[continue reading]

In 1959 Porsche introduced its successor to the popular Speedster model, the Convertible D (the 'D' standing for Drauz who built the bodywork.) It had a taller windshield and folding top and was therefore more comfortable and more practical than the ....[continue reading]

Both engines available in the 356 during the 1959 356A model year were 1600cc, one designated Normal and the other, Super. The earlier Super engine had featured a roller-bearing crank, but in 1958 this had reverted to plain bearings. These two motors....[continue reading]

This Reutter-bodied Porsche 356A T2 Cabriolet has been an American car from new. It was delivered to C.W. Bonner of Fresno, California. It left the factory finished in Metallic Silver (#5805) over red leather and vinyl interior and with a black top. ....[continue reading]

The Convertible D was produced for just one year with 1,331 examples built from 1958 through 1959. They had the low-slung body and chassis from the Speedster with a taller windshield, roll-up glass side windows, and a tidier fit for the convertible t....[continue reading]

This Porsche 356 A Convertible D wears a body by Drauz Karrosseriewerke, who was located in the northern city of Heilbronn, Germany. Gustav Drauz and partner Rudolf Leopold began their coachbuilding business in 1900. Their early clients were Daimler ....[continue reading]

This 356A Normal cabriolet is a US-specification model. It was completed on March 14th of 1959. It is finished in 702 Ruby Red with a red leather interior and black canvas folding top. It left the factory with US-spec sealed-beam headlights and bumpe....[continue reading]

This Porsche 356 is one of just four hundred forty-seven cabriolets built for the 1959 model year. It was fitted with a 60-horsepower 'Normal' engine when it left the factory on June 9, 1959, the same powerplant it has currently. The Cabriolet was so....[continue reading]

This 1959 Porsche 356 Carrera has aluminum panels and an external fuel filler. It was delivered to the Porsche race department, and used as a demonstrator by Huschke Von Hanstein. It ran the 1960 Nassau Speed Week, then Sebring driven by Carel-Godi....[continue reading]

An original sunroof car, this silver over green 1959 356A Coupe has been restored and treated to some engine/drivetrain modifications. Among the last of the 356As, this example is of the Type 2 body style, which was accompanied by a new transmission....[continue reading]

This Convertible D features a fjord green body over a tan interior. The Convertible D was a 356A-based successor to the Speedster, which by 1960 was itself replaced by the 356B Roadster. These stripped-down sporty models - Speedster, Convertible D,....[continue reading]

This low-mileage Porsche 356A Convertible D has been completely restored and returned to its original specification, including its stone grey paint and oxblood interior. The Convertible D was introduced in August 1958, replacing the Speedster. It s....[continue reading]

This Porsche 356 A Cabriolet was sold new in Tuscaloosa, Alabama and it has had just four owners since new. It was given a two-year restoration that was completed in the summer of 2017 at the cost of $128,000. Since the work was completed, it has bee....[continue reading]

The Convertible D (D for Drauz) is the successor to the previous model, the Speedster. The manufacturing work load at Reutter had left Porsche with no option but to select Drauz Karosseriewerke of Heilbronn to build their new convertible body. Only 1....[continue reading]

The 356 was Porsche's first production car and was road certified on June 8, 1948, with the completion of an aluminum-bodied prototype assembled entirely by hand. The first 356A (known as T1) appeared in 1956. The T2 Super first appeared in 1958 and ....[continue reading] 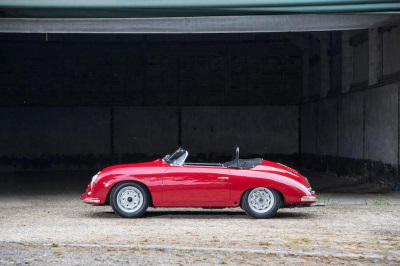 On Friday 30 June, Bonhams will be celebrating all things fast at its Goodwood Festival of Speed sale. Ten Porsches are set to appear on the rostrum, with two particularly rare and significant examples leading the pack. Whilst the 356 Speedster has...