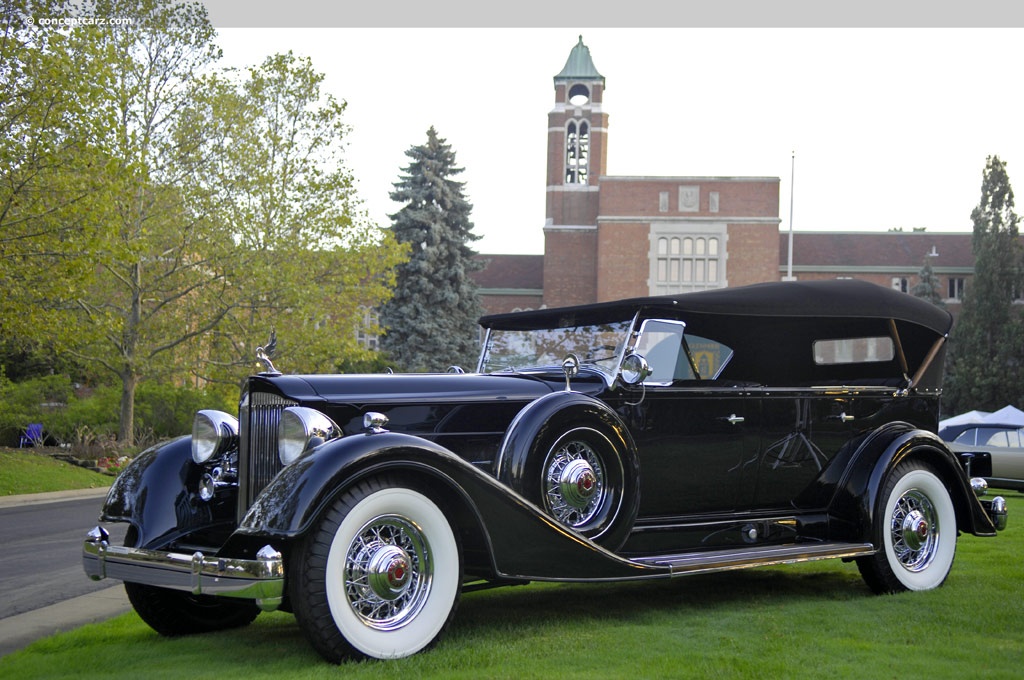 This elegant Packard is the first convertible Victoria that Packard produced in 1934. A gentleman from Tiburon, California, purchased it new on August 3, 1934. The cheapest Twelve cost six times the most expensive Ford. Its well-heeled customers e....[continue reading]

This 1934 Packard Twelve Runabout Speedster with coachwork in the style of Lebaron sits atop a 135 inch wheelbase and powered by a twelve cylinder engine. Meaning this vehicle has a Packard eight-cylinder chassis but the engine of the Packard Twelve....[continue reading]

The Packard V12 had a 160 horsepower, 445.5 cubic-inch engine with banks of cylinders at 67-degrees, and was produced from 1932 through 1939. Total production in eight years was about 7,000 units. This car was purchased new by the City of New York ....[continue reading]

There are only a handful of cars which earn universal acclaim in the world of car collecting, and the Packard LeBaron Runabout Speedster is one of those cars. These beautiful automobiles were the advance styling leaders for the following three years....[continue reading]

The Packard Twelve was, in many ways, the signature car of the Classic Era. One of the most influential and respected designers of the day was Ray Dietrich, and Packard became one of Dietrich's best customers.....[continue reading]

Pierce-Arrow catered to the social and economic elite of the day. Special colors not available to others were kept on hand for important families; seats, carpets, trunks and luggage were all custom fitted. Outstanding engineering gave the cars exce....[continue reading]

Revival of the mountain race from the 1930s Mercedes-Benz SSK and W 125 at the start 92 bends, 14 hairpins, 15 kilometres and a 1300-metre altitude difference The Grossglockner mountain race...
© 1998-2020. All rights reserved. The material may not be published, broadcast, rewritten, or redistributed.