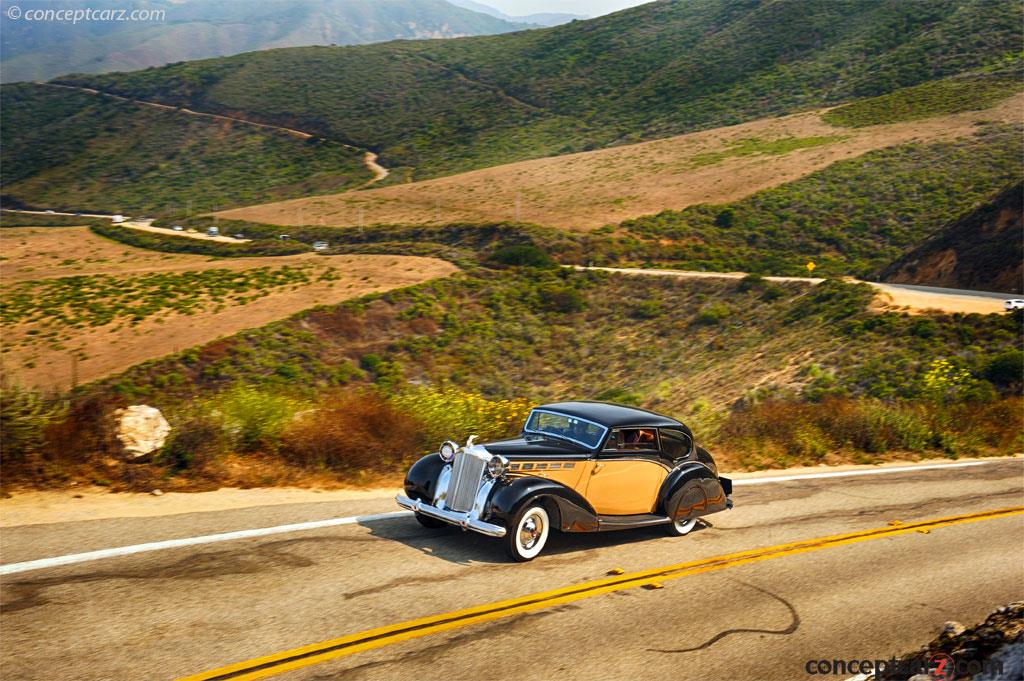 Known by Packard aficionados as the Sixteenth Series, the 1938 Super Eight quickly became the best-selling Packard of the era. Packard survived the Depression reasonably well due to the fact that it diversified its offerings; while many of its competition were building only V12 engines, Packard realized that the cheaper-to-build 8-cylinder motor could be equally smooth and powerful, so it continued to offer both Eights and Twelves on different chassis.

Mechanical changes were minimal for 1938. Stopping power was handled by hydraulic brakes and the transmission was a floor shift three-speed selective synchromesh unit. Many of the visual changes were also made to Packard's Junior models. One of the prominent appearance change was the split vee windshield with chrome dividing the split windows. Standard equipment included a cigar lighter, and an electric clock.

For 1938, the Packard Super Eight was a versatile vehicle offered in three wheelbase sizes and powered by a smooth engine. They were luxurious and highly refined, fitted with luxurious coachwork, and powered by proven engineering.

The Packard One-Twenty, also known as Packards 'junior' Six, accounted for the bulk of Packard's sales. 1938 was the second year for independent front suspension (via wishbones and coil springs) and hydraulic brakes. These features greatly improved d....[continue reading]

This 1938 Packard Model 1604 Coupe Roadster is one of just 71 examples produced in 1938 and less than 10 are believed to survive. It is believed that the original owner was underwold figure Paul de Lucia, aka Paul 'the Waiter' Ricca who served 3 yea....[continue reading]

This 1938 Packard Super 8 Roadster model 1604 was purchased new by Frank Cody, Superintendent (1919-1942) of the Detroit Public Schools and President (1933-1942) of 'The Colleges of the City of Detroit,' later renamed Wayne State University. Holding ....[continue reading]

Packard introduced its Sixteenth Series models in September of 1937. Most changes for the Senior cars were cosmetic including pontoon-shaped fenders and split windshields. The Super Eight features Packard's silky-smooth 320 cubic-inch, 130 horsepower....[continue reading]