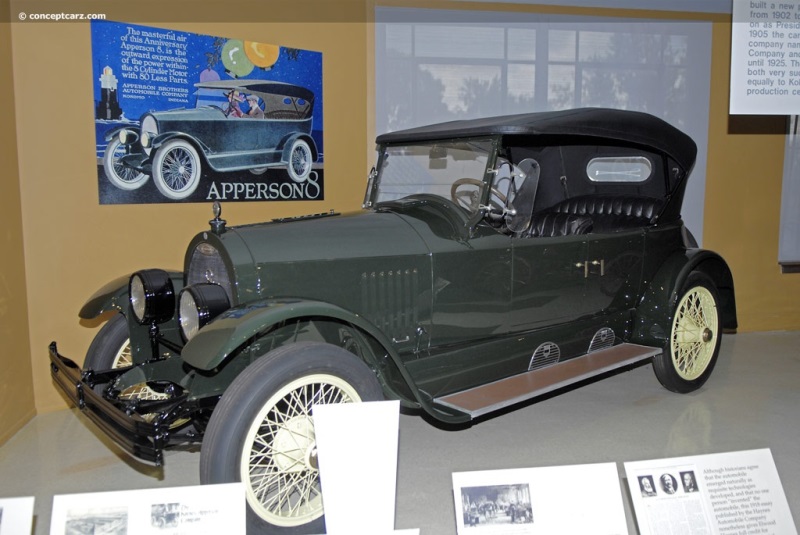 Tourer
Elwood Haynes (1857 - 1925), born in Portland, Indiana, was a metallurgist and inventor who moved to Kokomo in 1892. He is remembered for his discovery of stainless steel and the alloy Stellite. In 1891 he began designing a 'horseless carriage', and a few years later - in 1983, he contracted with Elmer Apperson to build the machine. After building a successful demonstration vehicle, the three men (Elmer, and his younger brother Edgar along with Elwood), created several more experimental vehicles. The Haynes-Apperson Company was formed in 1898 with the purpose of manufacturing and selling gasoline carriages. The Haynes-Apperson Company was formed in 1898. Along with Duryea, Winton, and Oldsmobile, they were one of America's earliest producers of the internal combustion-powered cars. Hundreds of vehicles would be produced prior to the partners split up in November of 1901. The Haynes-Apperson company had not been America's first gasoline automobile producer, yet it claimed as such in its promotional material. Elwood Haynes retained the Haynes-Apperson name on his cars until 1904. The Apperson Brothers Automobile Company was officially established in November of 1901. The first Apperson car appeared the following year, in July of 1902. They would build a total of four vehicles that year followed by 163 for 1903. 176 vehicles were built for 1904. The company's most famous automobile was the Jack Rabbit that was introduced in 1907. It had a round gas tank on the rear deck and was capable of speeds of 75 mph. It did not have a racing pedigree and never did claim first in any major race, though it did finish rather strongly in events such as the Vanderbilt, Briarcliff, and at Fairmount Park. On March 27th of 1920, Elmer Apperson died of a heart attack at the age of 58. He was attending an automobile race in Los Angeles, CA at the time.
The Apperson Company was in business for three decades and during that time they produced thousands of automobiles. This particular vehicle belonged to Edgar Apperson and was basically a rolling test laboratory. Over the years, it was given new features to test prior to them entering production. For example, it has a pre-selecting transmission with steering wheel-mounted controls that was mounted in 1920. This was put into production in 1923.
When the company went into receivership in 1926, the car was sold to the factory sales manager, Leo Williams. It was kept in the family until the 1980's. In 1985, Edmund and Jean Orser of Billings, Montana, donated the car to the Auburn Cord Duesenberg Museum.This Apperson Model 8-20 is powered by a 331.8 cubic-inch V-8 engine that delivers 60 horsepower. The wheelbase measures 130 inches and sold new for $2,950.
By Daniel Vaughan | Nov 2010