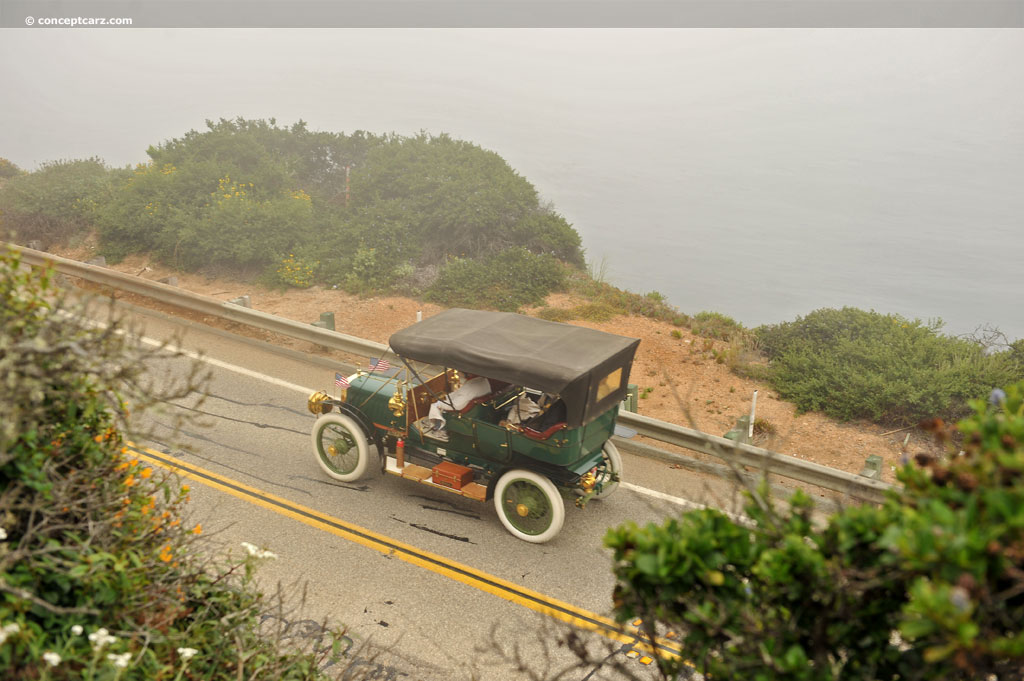 In 1896 the series production began for the Duryea Company, located in Springfield Massachusetts. The president of the company was Frank Dureya, having terminated the business relationship with his brother a year prior. Production continued slowly but steady. Additional capital was raised to expand business development and production. In 1901 Duryea teamed with the Stevens Arms and Tool Company to help expand the evolving business. The union resulted in the production of Stevens-Duryea automobiles, the first vehicle being show in November of 1901 and on sale in March of 1902. The vehicles were powered by 2 cylinder engines capable of producing 5 horsepower. During the 1902 model year, 50 examples were produced. In 1903, the company increased the horsepower to 7 and dubbed the vehicle the Model L. This series continued until 1905 when it was replaced by the Model R. In its introductory year, 300 examples were sold. The Model R was produced from 1905 through 1908. It featured a 20 horsepower engine and sat atop a 90 inch wheelbase.

In 1904, the contract between Dureay and the Stevens Arms and Tool Company was terminated. The Stevens-Duryea Company was formed by J. Frank Duryea where he was appointed chief engineer and vice president.

In 1906, the company introduced the Model S featuring a six-cylinder engine. With 50 horsepower and a 122 inch wheel base, the car was an instant success, with over 900 examples produced in its first year.

In 1909 came the Model Y capable of transporting seven passengers. The 142 inch wheelbase and 40 horsepower engine made it an excellent touring vehicle. Production continued until 1912.

From 1913 through 1914, the Model C was a six-cylinder vehicle built on a 131 and 138 inch wheelbase. It was the first Stevens-Duryea offered with electric lights and starter.

In 1915 the left-hand drive Model D was introduced and like the Model C, was available on a 131 and 138 inch wheelbase.

In 1922 the company was reorganized and the name was changed to Stevens-Duryea Motors Inc.

In 1927, production of the Stevens-Duryea automobiles ceased.

With claims of being the first automobile produced in the United States and winning the first automobile race ever transpiring in the United States, the Stevens-Duryea's place in history is forever certain. The company was innovative and its history progressive. It focused its resources on building reliable, beautiful, and economical automobiles. Today, their legacy can be seen at many car shows, Concourse's, and museums.
By Daniel Vaughan | Sep 2011

The Stevens-Duryea company produced its first car, a two-cylinder 5 horsepower runabout, in 1901. After his Duryea motor Wagon won America's first trophy race in 1895, frank Duryea joined forces with Frank Stevens and they created the Stevens-Duryea.....[continue reading]

Former championship runner-up James Colburn (Worthing) will contest his eighth full season in the Renault UK Clio Cup in 2018 as Westbourne Motorsport team-mate to the previously announced James Dorlin...
Model R
Model U
© 1998-2020. All rights reserved. The material may not be published, broadcast, rewritten, or redistributed.