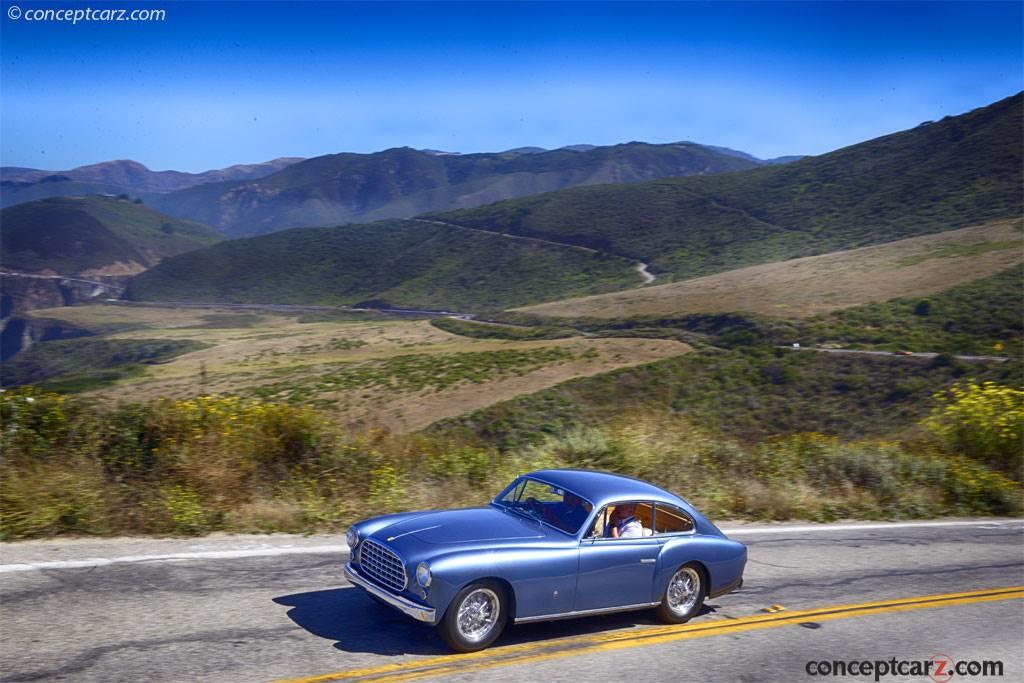 The Ferrari 212 was produced in multiple variations between 1951 and 1952 and was the company's earliest production car with approximately 110 individual chassis being built for clients. They were bodied in a Plethora of styles from coupes, lightweight spiders, and berlinettas to luxurious cabriolets. Most of the coachwork for the 212 was performed by Carrozzeria Alfredo Vignale with other bodies supplied by Touring and Ghia. The 212 was also the first Ferrari to be clothed by Pinin Farina, beginning a relationship that would yield some of the most attractive, elegant, and alluring Ferraris to-date.

The original V12 Ferrari engine designed by Gioacchino Colombo displaced 1.5-liters with 125cc per cylinder. The bore centers were placed 90 mm apart, allowing for future expansion. The engine would remain in production in numerous iterations until 1988, growing to nearly 5.0 liters in the 1985 412i grand tourer. In 1963, the engine received a redesigned block with wider, 94mm, bore spacing.

The Colombo-designed engine received its first increase in displacement to 1,995cc in the Ferrari 166, then to 2,341cc in 1950, followed by an increase in the cylinder bore from 65mm to 68mm bringing the individual cylinders to 212cc and the engine's displacement to 2,562cc.

In a similar fashion to the engine, the Ferrari chassis spanned many years and generations. It was constructed from two elliptical steel side-members with cross-members added for strength and rigidity. The rear suspension was comprised of a conventional live-axle setup with longitudinal semi-elliptic leaf springs. In the front were double wishbones with a transverse leaf spring and hydraulic shock absorbers. Ferrari's large hydraulically actuated drums provided the stopping power. The transmission was mounted directly behind the engine and had five forward speeds.

Two basic versions of the 212 were produced, but with unique distinctions. The Export model was intended for racing on tighter circuits and had a wheelbase of 2,250mm. The Inter version was typically built on a longer wheelbase chassis in both Gran Turismo and racing guise. Just like the coachwork, the engines were tailored to clients' needs with different carburation and tunes.

Over the production lifespan of the 212, the engine's elements were refined, including the introduction of cylinder heads with individual intake ports. When fitted with three 36mm downdraft Weber carburetors, horsepower improved to 170 bhp. Another change that occurred during the 212's production was the model designation, without comment or notice, to 'EU', foreshadowing the 250 Europa that followed.

Accolades in motorsport earned by the 212 include a first and second-place finish in the 1951 Carrera Panamericana by Piero Taruffi / Luigi Chinetti and Alberto Ascari / Luigi Villoresi.

Over a five year period, ending in 1952, Ferrari road car production totaled 142 examples of the 166, 195 and 212 Inters, with 82 being the 212 Inters. The 212 Inter was an essential automobile for Ferrari, providing necessary financial stability for the company while achieving some racing successes along the way.
by Daniel Vaughan | Mar 2020

The 212 Inter was descended directly from the first Ferrari of just four years previous. Introduced in 1951, the 212 was the replacement for Ferraris very successful 166 and 195 Inter GT vehicles. This was the eventual evolution of the 166, a sports car that would win international races, as well as being a road-worthy warrior. Sharing a similar chassis to the 125, the 212 had double wishbones in....
Continue Reading >>

The 166 Inter was powered by a 2-liter V12 engine and produced 115 horsepower. These were road cars and were given odd chassis numbers. The even chassis numbers were reserved for the vehicles that were intended for racing. The bodies of the Inter vehicles were mostly Berlinetta and Coupes. At first, Touring handled most of the road going body construction but it was not long before Vignale, Ghia,....
Continue Reading >>

The 212 Inter with four-seat bodywork by Vignale replaced the similar 166 Inter and led to the later 212 Export model. Ferrari production was only just getting started by 1951, and often only three or four cars were being delivered each month. Enzo F....[continue reading]

The 212 Inter and Europa series of cars were built between late 1950 and 1953, and are the most prolific of the early production cars manufactured, with the greatest variety of body styles. Along with his competition cars, Enzo Ferrari sold detuned r....[continue reading]

Two 1951 Ferrari 212 Exports competed in the 1951 Carrera Panamericana Race. it was the first year the rules allowed 4-passenger vehicles. The Ferraris finished first and second. The two Ferraris required little maintenance over the near 2,000-mile r....[continue reading]

In 1951, the Ferrari marque was still in its infancy. The four-year-old company had witnessed a victory by Count Giannino Marzotto in a Ferrari 195 S at the 1950 Mille Miglia. Their racing cars have proven their abilities on the worlds racing circuit....[continue reading]

The Ferrari 212 Inter was introduced in 1951 as the replacement for the successful 166 and 195 Inter GT models but with a more powerful engine. The 212 was built as a sports car for the road that could also win international races. Inter Vignales fin....[continue reading]