2013 VOLKSWAGEN PASSAT: ENGINEERED IN GERMANY, BORN IN THE U.S.A. 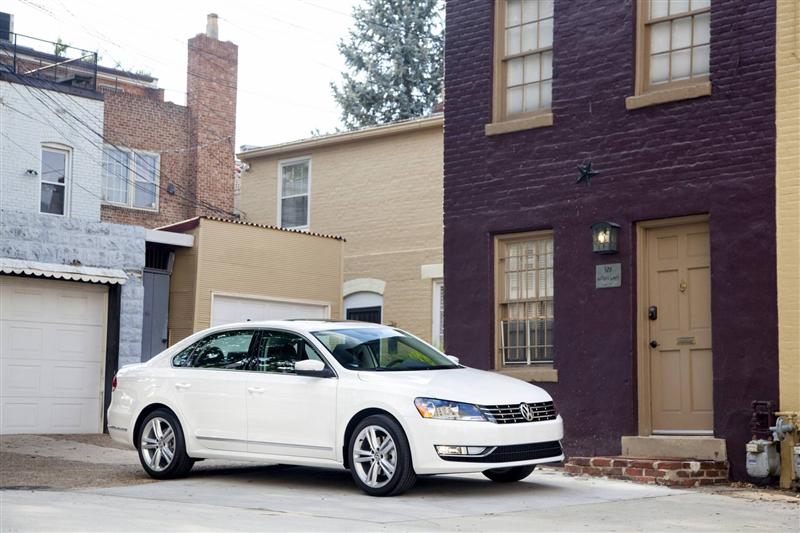 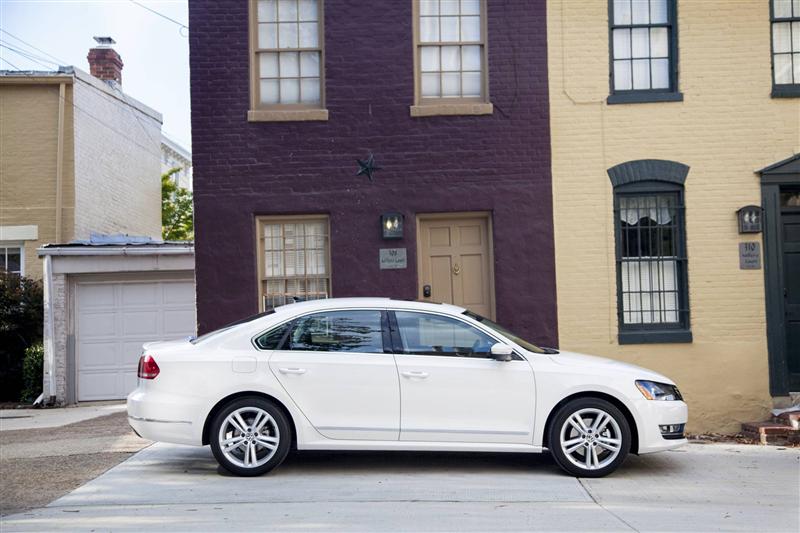 The new Volkswagen Passat has created a new standard in the mid-size sedan class and has been an instant hit in the marketplace. Here is a mid-size sedan with the space and comfort of many full-size models, offering remarkable, best-in-class, stretch-out rear-seat legroom and trunk space to match. As a result, it has garnered numerous third-party awards, including the highly prestigious Motor Trend 2012 Car of the Year. 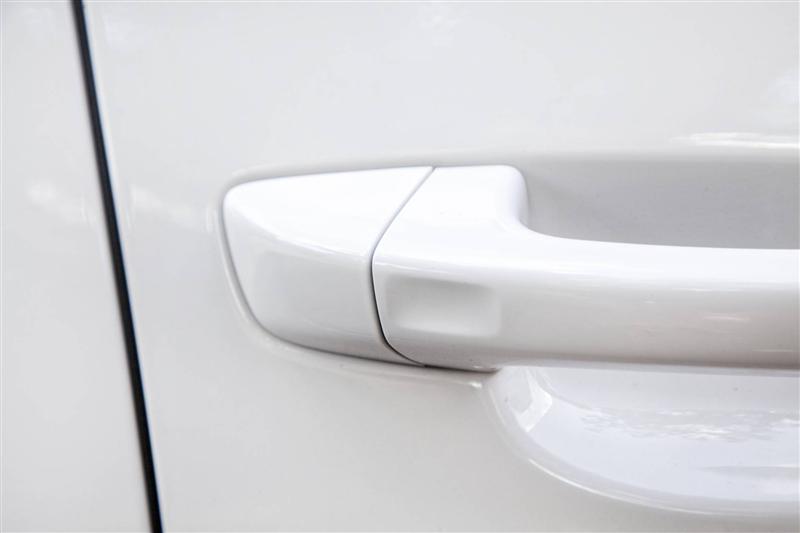 The Passat TDI version—the only clean diesel option in the segment—delivers an EPA-estimated 43 miles per gallon on the highway with the manual transmission, giving a range of almost 800 miles. That's New York to Chicago, San Francisco to Seattle, on one tank. Acknowledged mileage experts John and Helen Taylor recently set a single-tank long-distance driving record by taking a Passat TDI from Houston, Texas, to Sterling, Virginia—that's a distance of 1626 miles—on one tank of Clean Diesel fuel. (concept carz) 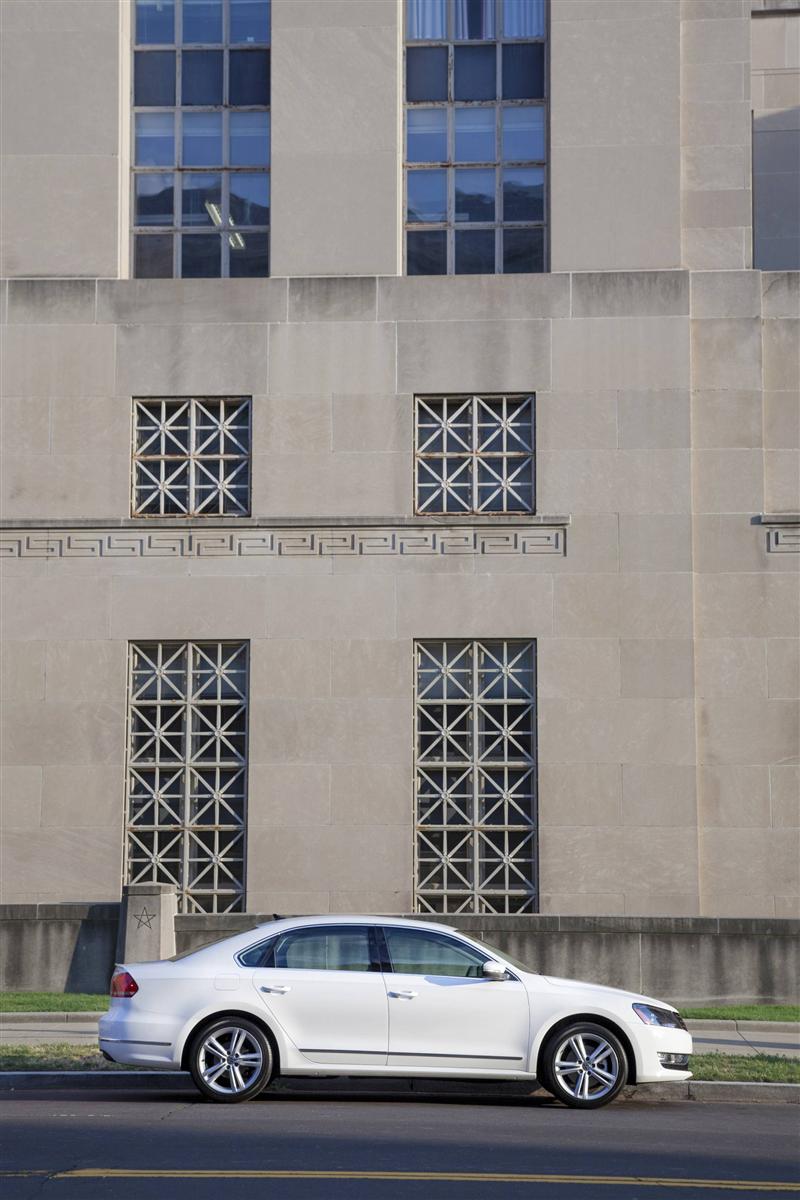 And it is being built in Chattanooga, Tenn., in a plant with a strong commitment to environmental responsibility: this is the only automotive factory in the world to have gained the Ú.S Green Building Council's LEED® Platinum-certification. One key measure at the plant is the use of a painting process without any filler, which reduces CO2 emissions by about 20 percent.

If all that wasn't impressive enough, the 2013 Passat comes with a starting MSRP of just $20,845 for a five-cylinder model with Bluetooth® connectivity, steering-wheel audio controls, and all scheduled maintenance covered under Volkswagen's no-charge three-year/36,000-mile Carefree Maintenance® program.

The clean design, with a predominance of horizontal body elements, reinforces the Passat's position as the sophisticated choice in the mid-size segment. The bottom line is that the car looks a lot more expensive than it actually is.

The key identifying feature of a strong brand is the styling of its front end. Here the Passat displays the horizontal brand face, with the three-blade grille and headlights forming a single unit. The Passat's grille is sculpted in a three-dimensional shape and makes a distinctive and elegant impression because of its strict geometry. Beneath the front bumper is a large, lower intake with a striking honeycomb surface and available foglights housed at each end.

From the side profile, the muscular ridge in the sill area creates a lively interplay of light reflections. Powerfully sculpted wheelarches emphasize the dynamic properties of the Passat. To emphasize the aerodynamic styling of the Passat, the roof lines flow toward the back with a nearly coupe-like cut of the rear window. Three side windows create luxury-class style with a long, extended glass surface.

The rear section is also dominated by horizontal lines. The lines of the large taillights rise toward the sides, underscoring the dynamics of the elegant rear styling. Another unique feature here is the design of the two-part taillights that are integrated in the rear fender and trunk lid.

This is a generously-proportioned four-door sedan and the largest Passat ever. Nose to tail it measures 191.6 inches and features a stretched 110.4-inch wheelbase and 72.2-inch width, which allows such exceptional rear-seat space.

Interior
The Passat was designed and specifically tailored for American tastes and American lifestyles. So the cabin of the all-new Passat delivers space, and plenty of it. There's room for five adults to really stretch out in comfort. And with four large, wide-opening doors, getting in and out is a cinch.

There's also a true elegance and simplicity about the layout. Nothing here is trendy or over-done. The lines flow in a style that's easy on the eye, complimented by the highest-quality materials applied with painstaking attention to detail.

The instrument panel is similar to that of Volkswagen's flagship model, the Touareg. Available chrome-trimmed gauges surround a digital multifunction display. A high-end chrome look is also applied to the air vents in the cockpit, and to the surrounds of the radio, navigation system and the climate control panels. The rotary light switch and parking brake handle button are also treated in chrome. Except for the base version, all other Passat trims have chrome interior accents on the window, mirror adjustment, and trunk opening switches.

The seats are exceptionally comfortable, with an emphasis on providing extra thigh support for long-distance road trips. Even in the base version, the driver's seat adjusts eight ways, including lumbar, while most models feature eight-way power adjustment. Inviting cloth trim is offered with the base S model, with the SE versions feature Volkswagen's trademark perforated V-Tex leatherette: SEL models move up to full leather seating surfaces.

For 2013, Passat SE and SEL models receive a new center console that incorporates rear air vents, a new cupholder design, and a revised front stowage area that has a hinged cover. All SEL trim models now have a rearview backup camera.

Fender® Premium Audio
There is no shortage of entertainment system options with the Passat—but the most exciting is the Fender Premium Audio System, which was designed to bring the raw emotion of a live music performance to the driving experience.

Vital Stats
Engine : 2.5 L., 5-cylinder
Power: 170 hp
Torque: 177 ft-lbs
5-speed Manual6-speed Automatic
The system was developed through collaboration between Fender, the legendary music amplification experts, who also make some of the coolest guitars for the rock star elite, and Panasonic®. It cranks out 400 watts of power played through nine speakers, including a trunk-mounted subwoofer.

And the same cool, chromed Fender logo that has graced the guitar 'amps' of some of the world's music legends is featured on the Passat's Fender system.

The refined, 2.5-liter five-cylinder engine features chain-driven double overhead camshafts, four valves per cylinder, and maintenance-free hydraulic lifters. It makes 170 horsepower and 177 lb-ft of torque and is available with a five-speed manual gearbox as standard or with an optional six-speed automatic.

The 2.0-liter TDI Clean Diesel inline four-cylinder engine produces 140 hp and 236 lb-ft of torque. It delivers an EPA-estimated fuel economy rating of 43 mpg on the highway when equipped with the six-speed manual transmission, giving a range of 795 miles on one tank of ultra-low-sulfur clean diesel. The TDI engine is equipped with a Selective Catalytic Reduction System (SCR) that fulfills emissions requirements in all 50 states. 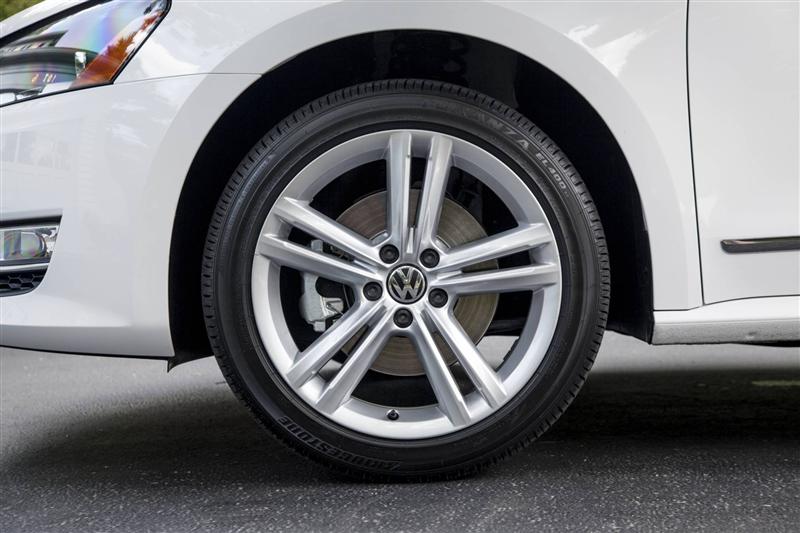 Optional on the Passat TDI Clean Diesel is Volkswagen's DSG® six-speed automatic. This dual-clutch transmission is considered the most-efficient automatic in the world. It incorporates a dual-clutch system that instantly engages and disengages gears without the need for a clutch pedal. With a special computer controlling the process, one clutch is engaged on the next gear, while the clutch from the previous gear is released.

The 3.6 liter VR6 makes the new Passat a top-flight sport sedan. (concept carz) Producing an impressive 280 hp and 258 lb-ft of torque, it offers power and luxury-class driving comfort, with European-type restraint in its fuel consumption—the EPA highway estimate is 28 mpg. Shifting on the new Passat VR6 is handled by a standard six-speed DSG.

Suspension
The Passat has been designed to feature the kind of dynamic, involved handling and precise steering drivers have come to expect of a Volkswagen. The new Passat may be a big car, but it drives small.

The steering system comprises a power-assisted rack-and-pinion set-up, perfectly weighted to provide a balance between precision at higher speeds, and lower steering weight at parking speeds. Swinging into that tight, mall parking spot is easy, thanks to the Passat's 36.4-foot turning radius and three turns lock-to-lock.

Safety and Security
Safety is not on the options list at Volkswagen, which is why every Passat comes with a comprehensive suite of active and passive safety features.

Safety starts with a specially-reinforced safety cage, complete with anti-intrusion side beams and forged steel roof B-pillars. Behind the sleek nose, there is a crash-optimized front-end featuring integrated impact-absorbing elements that help minimize the collision energy.

Naturally, every new Passat comes with Electronic Stability Control (ESC) that helps compensate for oversteer or understeer by applying individual corrective forces to each of the wheels. Also standard is an Anti-lock Braking System, Hydraulic Brake Assist, Tire Pressure Monitoring, and Volkswagen's acclaimed Intelligent Crash Response System. In the event of a collision it automatically unlocks the doors, shuts off the fuel pump, and even turns on the hazard warning lights.

The six standard airbags include front and side thorax airbags for the front-seat occupants, together with Side Curtain Protection® airbags front and rear.

Peace of mind in owning a new Passat comes from Volkswagen's no-charge Carefree Maintenance Program. It covers all scheduled maintenance for the length of the New Vehicle Limited Warranty, which is three years or 36,000 miles, whichever comes first.

Model Line-up
The Passat is offered in three trim levels, S, SE and SEL, with a total of 15 equipment levels. All offer first-class safety and comfort.

Building in America
Volkswagen's Chattanooga plant that produces the Passat is part of a $4 billion investment by the company in the Ú.S. market. The facility was designed to keep environmental impact to a minimum and includes a revolutionary paint shop that significantly reduces emissions. A state-of-the art $40 million employee training center ensures adherence to Volkswagen's exacting quality standards. ( posted on conceptcarz.com) For more information go to: www.volkswagengroupamerica.com/chattanooga.

A favorite for consumers searching for a bit more luxury and style in their midsize family vehicle, the Volkswagen Passat fit in the gap between the normal boring family cars and the more expensive ‘out of reach luxury brands. The Passat was featured spunky performance, competent handling, and amazing comfort, even on just the base model. The Passat was built by Volkswagen through six design generations....
Continue Reading >> 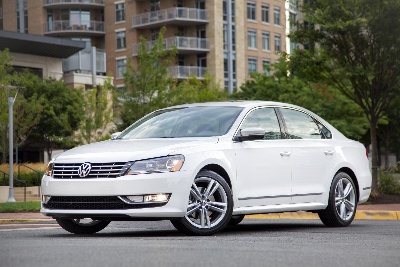 The Passat is ranked highest in the Midsize Car segment for the second year in a row GTI is ranked most appealing in the Compact Sporty Car segment Beetle and Tiguan are ranked second in their segments Volkswagen is the highest ranked non-pre... 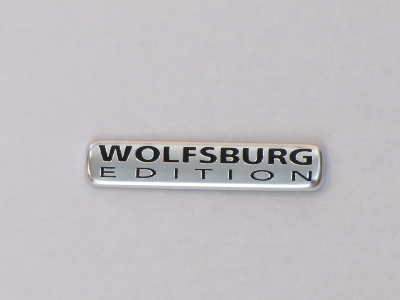