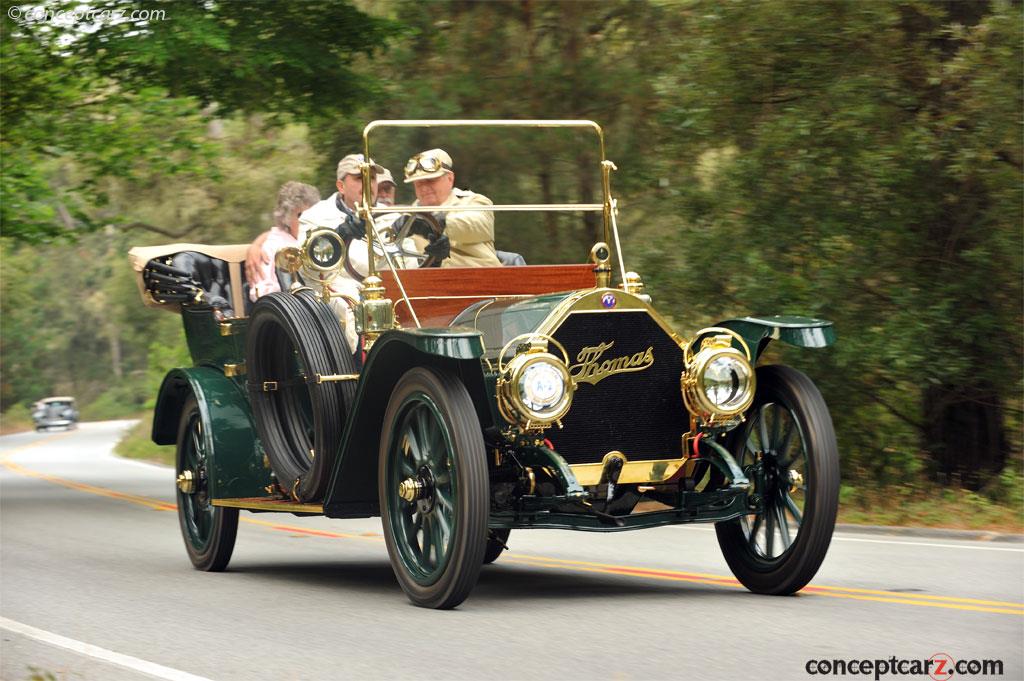 Many bicycle manufacturers at the turn of the century switched to motorcar production, and that includes Erwin Ross (E.R.) Thomas. He was the managing director during the 189s0 for the Cleveland bicycle builder, H.A. Lozier & Company. With the newly evolving automobile gaining popularity, he left Lozier to take over the Buffalo Automobile and Auto-Bi company, which was renowned for its bicycles and motorcycle engines. The company's name was changed by E.R. to Thomas Auto-Bi, and by 1901 Thomas claimed to build more air-cooled motors that any other manufacturer. By 1903 they were building 'French Front' single-cylinder voiturettes followed a year later by a raised radiator three-cylinder car which birthed the term 'Flyer.'

The high-point in the Thomas Flyer legacy came in 1908, in the Le Matin sponsored 'The Great Race.' Beginning in winter, the route went from New York to San Francisco, then by ship to Alaska, and across the Bering Strait, either by ship or by ice to Siberia. After many more miles, countries, mountains, and rivers, the race ended in Paris.

E.R. Thomas decided to enter a car as a last-minute decision. Three days before the start of the race, a stock 1907 model was selected from the factory lot. With minimal changes or modifications, the car completed the 13,341-mile journey, taking 171 days to complete. It arrived in Paris before any of the other entries and forever cemented its place in history. The accomplishment boosted sales and in September of 1909, Thomas introduced the light six Model M for the 1910 model year.

The Model M was a development of the previous year's Model L, with the previous L-head engine being replaced by a new T-head design. The engine was larger requiring a bigger radiator and hood. It was a 440 cubic-inch inline six-cylinder unit fitted with a single carburetor developing 64 horsepower at 1,500 RPM and backed by a three-speed manual transmission. The suspension was comprised of leaf springs and drum brakes provided the stopping power.

To demonstrate the power and durability of the new six-cylinder engine, a stock Model M was taken off the show floor, and all of its gears were removed from the transmission, except high and reverse. It was then driven from Buffalo over the Berkshires, the White Mountains, the Green Mountains, and the Adirondacks and back to Buffalo, all in high gear.

Production of the Model M continued over the next few years and by 1912 it had acquired an extra inch in the wheelbase and an MC designation.
by Daniel Vaughan | May 2020

The Erwin Ross (E.R.) Thomas Motor Company produced automobiles from 1902 through 1919. Production transpired in Buffalo, New York. The first cars produced by the company appeared in 1903 and were mostly small runabouts with seating for two. The company had begun like so many other auto-manufacturing firms at the time - through a bicycle business. Thomas had been building bicycles for several....
Continue Reading >>

Prior to manufacturing automobiles, Erwin Ross (E.R.) Thomas was in the bicycle business. During the 1890s, E. R. was the managing director for H. A. Lozier & Co. who produced the Cleveland bicycle. Realizing the potential in the newly introduced aut....[continue reading]

Mr. Erwin Ross 'E.R.' Thomas first became known for making bicycles, but in 1903 he moved on to automobiles, and by 1905 the Thomas Company was building its now-famous four-cylinder Thomas Flyer. In 1908 the company entered a Flyer in the Great Race ....[continue reading]

This 1910 Thomas Model M 6-40 Flyabout is powered by a 440 cubic-inch T-Head inline 6-cylinder engine developing 64 horsepower and backed by a three-speed manual transmission. It is currently in the private collection of Harold Coker and is understoo....[continue reading]