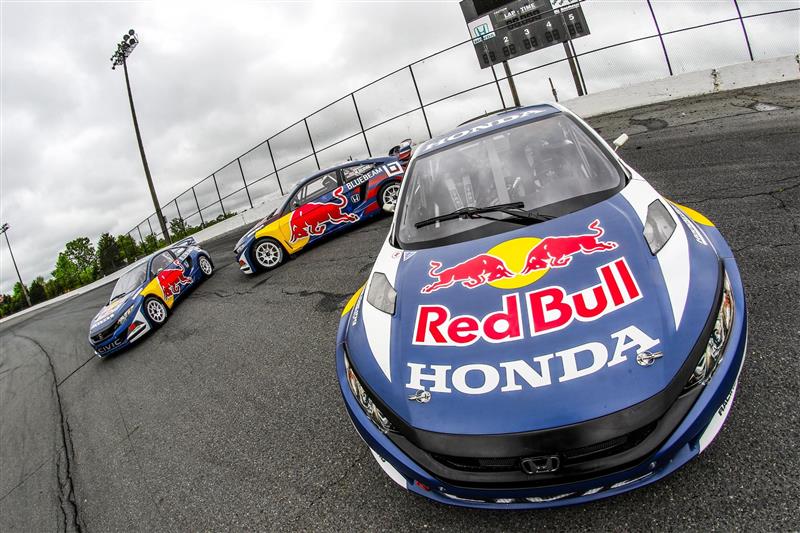 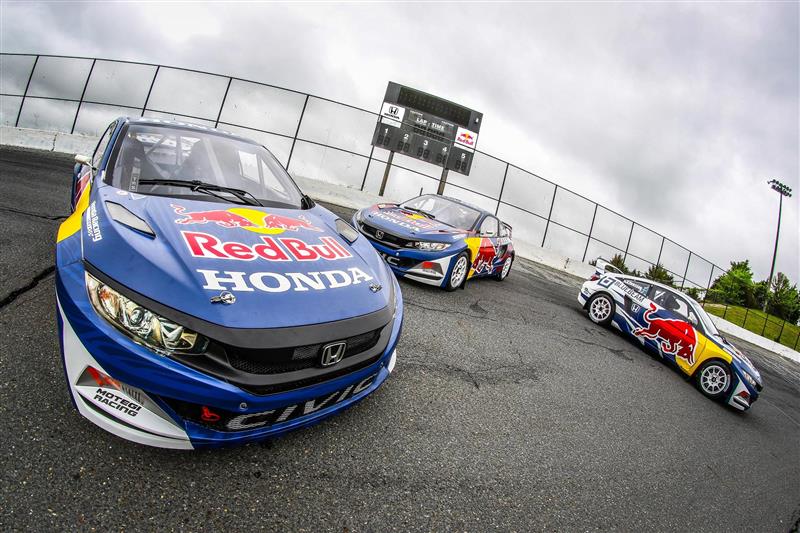 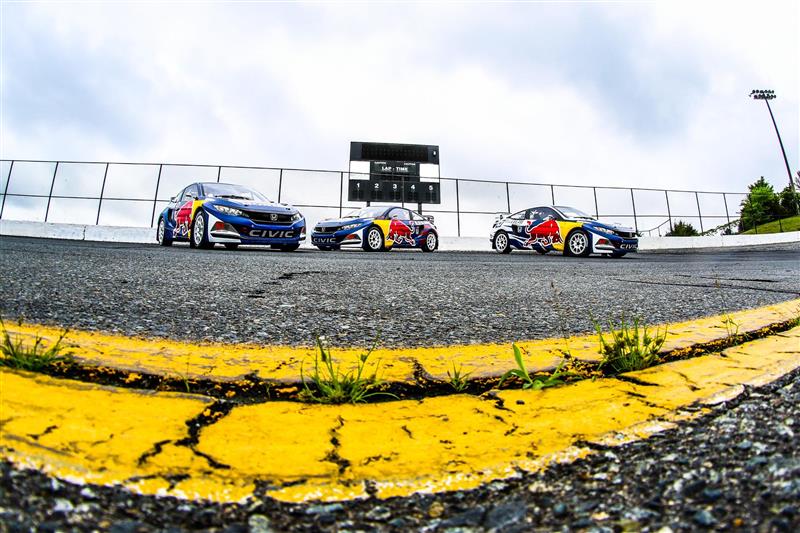 The liveries feature a look, the likes of which haven't been seen in Red Bull GRC competition. All Honda Civics will sport the Red Bull brand, but touches of anodized red and matte finishes within the energy drink's logo accentuate what will be known as one of the most creative liveries in auto racing. 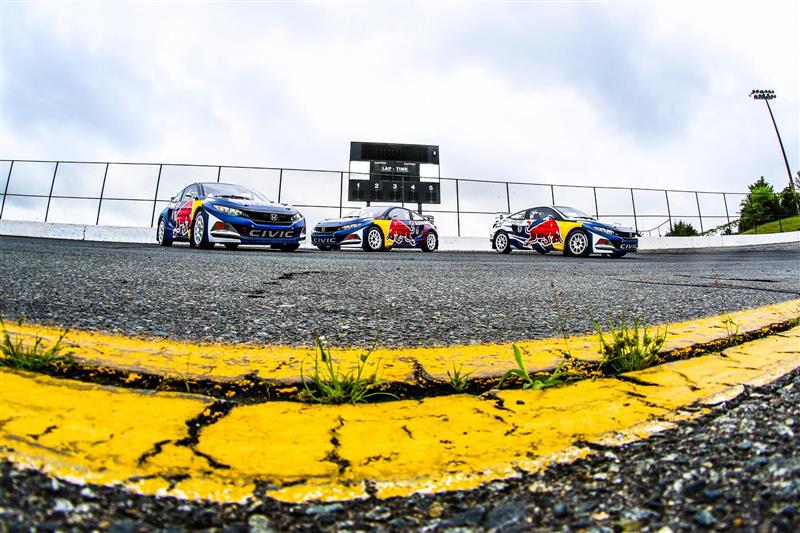 For the returning Swede, Sebastian Eriksson, his No. 93 Honda Civic Coupe pays homage to the traditional OMSE livery, the fast and thrilling navy-blue and ghost-white scheme. For the 18-year-old Swedish rookie Oliver Eriksson (no relation), the No. 16 screams aggression. The navy-blue design features an abundance of attacking stripes imbedded throughout the car, highlighting Eriksson's creativity and determination on and off the track. For the No. 24 of Temecula, Calif. native Mitchell deJong, patriotism and passion highlight his new livery. Stars and stripes line each side of the Civic, paying tribute to Honda's first American Rallycross driver.

The Honda Racing trio of S. Eriksson, O. Eriksson and DeJong will pilot their 2017 Honda GRC Civic Coupes in Memphis on Friday and Saturday. Qualifying coverage for the first event of the season begins Saturday night at midnight ET/ 9 p.m. PT on NBCSN, with the finals airing Sunday, April 30 on NBC at 1 p.m. ET / 10 a.m. PT.

Oliver Eriksson (No. 16 Honda Red Bull OMSE Civic): 'These liveries are lit. We are the biggest team in Red Bull GRC and we represent the best sponsors in the sport Red Bull, Honda, Bluebeam. Motegi Racing, KN Filters, Bell Helmets, BF Goodrich and now, I think, we have the best liveries as well.'

Mitchell deJong (No. 24 Honda Red Bull OMSE Civic): 'When I first saw the designs I got really excited. For one, I get to have the Stars and Stripes on my Red Bull Honda. I love my country and I also love this team; the fact that I get to drive this cool car just motivates me even more.'

Sebastian Eriksson (No. 93 Honda Red Bull OMSE Civic): 'I enjoyed my car design last year, and I enjoy it even more this year. The blue is a bit darker which is refreshing. It makes it look faster and the lines on the back are sharper, which I think also makes it more aggressive.'

Vital Stats
About Honda
Honda offers a full line of reliable, fuel-efficient and fun-to-drive vehicles with advanced safety technologies sold through over 1,000 independent Ú.S. Honda dealers. The Honda lineup includes the Fit, Civic, Accord and Clarity Fuel Cell passenger cars, along with the HR-V, CR-V and Pilot sport/utility vehicles, the Ridgeline pickup and the Odyssey minivan.

Honda has been producing automobiles in America for 34 years and currently operates 19 major manufacturing facilities in North America. In 2016, more than 96 percent of all Honda vehicles sold in the Ú.S. were made in North America, using domestic and globally sourced parts. 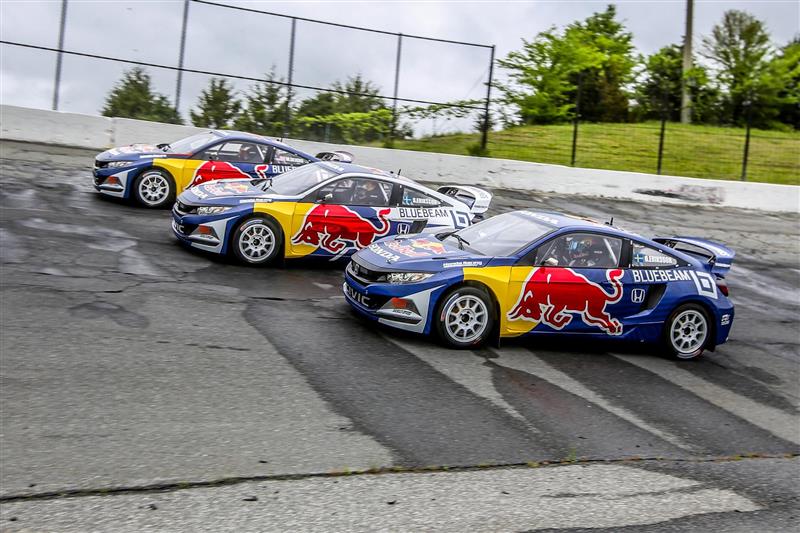 About Red Bull Global Rallycross
Created to produce the fastest and most exciting racing in motorsports, the Red Bull Global Rallycross Series pits small production-based cars driven by star drivers against each other in door-to-door racing featuring dirt, asphalt, and table-top jumps. With enhanced engineering and safety features, the cars produce 600 horsepower and can accelerate from 0-60 miles per hour in less than two seconds, and can also withstand 70-foot jumps and other vehicle contact. For more information, visit www.RedBullGlobalRallycross.com.Source - Honda 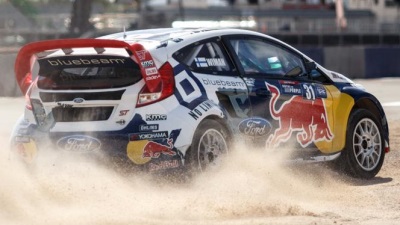 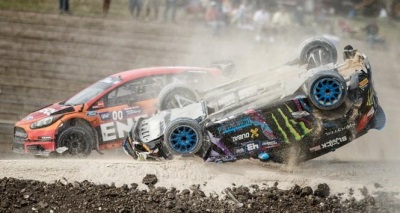 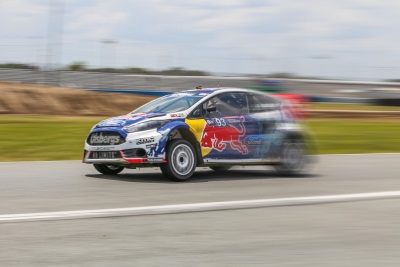 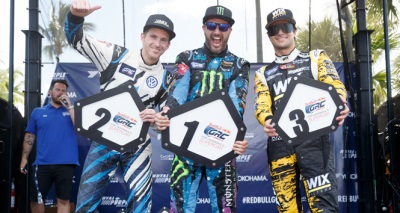 Ken Block backed up his season-ending win in Las Vegas last year with a victory to kick off the 2015 Red Bull Global Rallycross season, taking top honors in the season-opening race at the Bahia Mar Resort in Fort Lauderdale, FL. Block held off strong...