For more than 20 years, the MX-5 Miata has offered sports car enthusiasts a pure, simple, fun-focused roadster at an attainable price. Sticking to that simple concept has made the MX-5 the most popular two-seat convertible sports car in the world, according to the experts at the Guiness Book of World Records, with more than 850,000 sold.Substantially refreshed for 2009, the 2010 MX-5 receives minor updates to the model, series and color availability. MX-5 remains the very essence of the 'oneness of horse and rider' credo that has guided development of every generation of MX-5.The heart of the MX-5 remains a highly-responsive MZR-series 2.0-liter, powerplant making 167-horsepower (158 for automatic transmission-equipped models). The MZR is light and compact, featuring chain-driven double overhead camshafts, a lightweight flywheel, variable intake valve timing, electronically controlled port fuel injection and coil-on-plug ignition. Revving smoothly to its 7,200 rpm redline (6700 rpm with an automatic transmission), the flexible 2.0-liter engine delivers 140 lb-ft of torque at 5,000 rpm for driving exhilaration throughout the rev range.'Whether it's driven up the coast on a sunny afternoon or thrust through the corners on a race track, MX-5's legendary performance will put a smile on your face. Its power is ample, its nimbleness is astounding and its looks timeless, yet fresh and new,' said Chris Hill, MX-5 vehicle line manager.DRIVER-FOCÚSED POWERTRAIN:

The sophisticated 2.0-liter four-cylinder engine gives strong performance, has an inspiring exhaust note, and most important of all, is tremendously responsive. It reacts to driver commands with lightning-quick reflexes, and offers progressive power delivery. Such linearity is the key to all of the MX-5's driving controls. Classic sports car engine sound has always been a hallmark of the MX-5 Miata. The original 1.6-liter 1990 model was tuned to mimic the sound of dual-carbureted sports cars of the '60s. Key to a fuel-injected engine making that sound is careful tuning of intake resonance, and pointing the engine's air intake at the driver so that sound is delivered with maximum effect. While the 1990 Miata did just that, it drew in hot underhood air from behind the radiator. Today's engine draws in cool air from the nose of the car for better efficiency, but getting that classic induction sound to the driver now requires new technologies. Since the 2006 model, the lightweight plastic composite intake manifold itself has been designed to transmit certain frequencies that match the classic sports car sound profile, while suppressing less enjoyable sounds. The 2010 six-speed manual models are equipped with an Induction Sound Enhancer (ISE). Made up of a series of tuned pipes and a passive resonance membrane, the ISE delivers the engine's natural induction sound to the cowl, just ahead of the windshield, so pleasing engine sounds can be delivered at a comfortable volume without resorting to simply being loud.The engine is mounted front mid-ship, for ideal handling balance and nimbleness. It uses an aluminum block and head for lighter weight and structural rigidity, ultimately improving performance and refinement. Chain-driven double-overhead camshafts and 16-valves are used for improved revving and flexibility. Variable intake valve timing improves low-end torque and high-end power.The engine features a forged steel crankshaft, forged steel connecting rods with floating wrist pins, revised pistons with stronger wrist pin bosses, stiffer valve springs, and an engine oil cooler.Standard equipment is a close-ratio five-speed manual transmission, and a six-speed manual gearbox is available, with gear ratios close-stacked to enhance the joy of driving. A Sport A/T automatic transmission adds dimension to the MX-5's personality. Six ratios are provided to improve acceleration, driving refinement and freeway comfort. Paddles mounted behind the steering wheel command upshifts while buttons positioned on the spokes are used for downshifts. Coordinating engine torque with the shift sequence results in smooth, seamless, and fast gear changes. The Sport A/T-equipped car is a joy to drive, with gear ratios perfectly matched to the engine's horsepower and torque output.A STYLE OF ITS OWN

The MX-5's fun and modern exterior design retains the iconic feel of the earlier generation MX-5 Miatas while simultaneously moving it into the future. The body is shaped to make the cockpit the widest portion of the car, delivering a roomier, safer design that still expresses the compact look of a lightweight sports car. Side surfacing is rounded, yet taut - like the skin over a muscled body. Head and tail lamps are mounted inboard to reinforce the sense of compactness that is so central to the car's design philosophy. Joining this modern shape are tail lamps and rearview mirrors that harken back to the elliptical shape of the first-generation MX-5 Miata and a silhouette that could be mistaken for nothing else.
The front of the MX-5 features an aggressive face with a five-point grille and highly-sculpted triangular front fog lamp bezels. The design is functional as well. The bulge below the front fog lamps, the wide air deflectors ahead of the front tires, the side sills, the rounded lower corners of the rear bumper and even the taillights all contribute to a low coefficient of drag.Mazda virtually invented the easy-to-lower-and-raise soft-top of the original Miata, and the 2010 model continues to set the industry standard. Únlike competitors' models, the top can be lowered or raised with one hand, from inside the car, and requires no bulky or complicated snaps or external latches. The Z-fold design uses a simple, central latch handle that requires only a simple wrist movement to stow. Introduced in 2007, a Power Retractable Hard Top model remains available in two trim levels - Touring or Grand Touring. This addition to the lineup builds on the soft-top two-seater's zest for life by enhancing year-round comfort and security. Rather than consuming interior or trunk room, the folded roof descends into the same storage well behind the seats where the soft top would have stowed.Opening and closing cycles last only 12 seconds, making this the fastest power-operated retractable hard top in the Ú.S., and the only retractable hardtop on the market that doesn't compromise trunk space. DRIVER-INSPIRED INTERIOR

The interior design theme balances comfortable snugness below shoulder level with openness above, to give the impression of riding in open air.The T-shaped instrument panel is consistent with Mazda design-DNA while the center console accentuates the backbone of the car. Strong horizontal and vertical theme lines connote rigidity and sports car capability. The black center stack is as simple and functional as possible. The arched hood over the instrument cluster and four circular vents are part of the MX-5's cabin identity.Wind in the hair is one thing, but nobody enjoys cockpit turbulence and buffeting, especially on long drives. Small quarter windows block drafts between the windshield pillars and door mirrors into the cockpit. An aero board located between the seat back hoops is tall and perforated to slow down reverse-flow air that rushes into the cockpit.RACE-READY FROM THE DEALERSHIP

Too much weight is bad for athletes, and it's just as bad for sports cars. Weight slows acceleration, lengthens braking distances, dulls handling and cripples fuel economy. Mazda engineers worked hard to make the MX-5 light-weight - all while building a roomy, safe car.
Weight-saving measures include the use of an aluminum hood and trunk lid, aluminum front control arms, aluminum rear uprights and rear calipers. The unibody makes widespread use of high-strength and ultra high-strength steel, boosting body strength while simultaneously cutting weight. The 2.0-liter engine has an aluminum block and head, the exhaust manifold is lightweight tubular steel instead of cast iron, and the intake manifold and cam cover are made from lightweight composite plastic. In the end, MX-5 is very light, yet roomy enough for larger adults, and safe for everyone, thanks to its strong body and safety features (including anti-lock brakes on all trim levels, standard side airbags, and a passenger's airbag cutoff switch so you can carry young children in a child safety seat). Since the original MX-5 Miata, Mazda engineers have made this light weight possible through their now legendary 'gram strategy'. One of the imperatives for Mazda engineers was making every gram count by assessing the weight of every single component, no matter how insignificant it may seem by itself. By applying this strategy throughout every nook and cranny of the MX-5's design, Mazda engineers were able to create a light, roomier, stronger and safer sports car like no other. MODELS AND ACCESSORIES

Mazda has a distinguished history of producing great sports cars. The first Mazda sports car to win worldwide recognition and praise was the rotary-powered Cosmo Sport 110S launched in 1967. The RX-7, which followed in 1978, won the hearts of sports car enthusiasts and was a dominant force on the racetrack. The original MX-5 Miata, launched in 1989 as a 1990 model, revolutionized the affordable two-seat roadster market. Mazda's introduction of the RX-8 redefined the boundaries of sports car design by offering spectacular performance and comfortable accommodation for four adults in one innovative sports car package.All of Mazda's considerable expertise and passion for designing great sports cars was drawn on for the latest third-generation MX-5.And while Mazda likes to say that every one of its cars has the soul of a sports car, the MX-5 truly does, as it is the single most-raced nameplate in the world. All 2010 Mazdas come with a roadside assistance program. With a call to a toll-free number, owners can access roadside assistance 24 hours a day, 365 days a year throughout the Únited States and Canada. In addition, a comprehensive three-year/36,000-mile warranty covers every part on the vehicle except those subject to normal wear. Also, all 2010 models receive a five-year/60,000 mile powertrain warranty and a five-year/unlimited-mileage corrosion warranty.Headquartered in Irvine, Calif., Mazda North American Operations oversees the sales, marketing, parts and customer service support of Mazda vehicles in the Únited States, Canada and Mexico through nearly 900 dealers. Operations in Canada are managed by Mazda Canada, Inc., located in Ontario, Canada, and in Mexico by Mazda Motor de Mexico in Mexico City.Source - Mazda 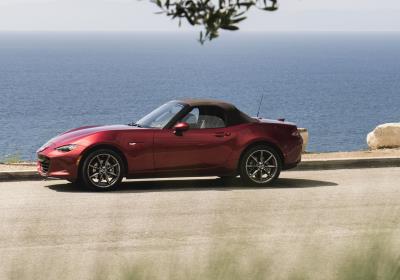 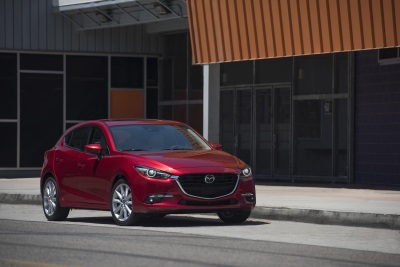