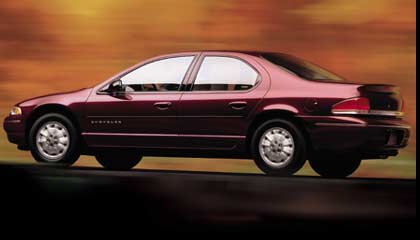 Unveiled at the 1992 North American International Auto Show as a concept vehicle, it was three years later that the Cirrus replaced the LeBaron. A mid-size 4-door entry-level luxury sedan, the Cirrus was marketed by Chrysler in the U.S., Mexico, Brazil and Canada from 1995 through 2000. Known collectively as the 'Cloud Cars', the Cirrus and other similar JA platform model, the Plymouth Breeze and the Dodge Stratus all had names that referenced meteorological terms. 'Cab-forward' was the new design by Chrysler and the Cirrus utilized this by pushing the wheels to the corners of the vehicle and bringing the windshield's touchdown point to near the centerline of the front wheels. The interior cabin space was now improved dramatically and allowed for much more room for passengers. Standard features on the Cirrus included twin-post, fog lights that were built into the front bumper, rear-view mirrors, a chrome vertical grille and chrome front and rear bumper trim.For 1995 the Chrysler Cirrus was named Motor Trend magazine's Car of the Year for 1995 and it was also noted on Car and Driver magazine's Ten Best list for both 1996 and 1997. Chrysler marketed Cirrus as the premium brand in the 'cloud cars' trio. Most often it was advertised as the ‘top-of-the-line' model and a leather-trimmed LXi variant came with a Mitsubishi-sourced 2.5 liter V6 engine.
The Cirrus was available in two trim levels from 1995 to 1997, the entry-level LX and the luxury LXi. Though a Plymouth variant of the JA was not originally planned, an entry-level LX model was offered to the public. In 1996 Plymouth did produced the Breeze, and the Cirrus continued to be offered as an LX through the 1997 model year. The Cirrus LX featured an optional 2.4 L I4 engine in 1996 while the 2.5 L V6 engine was standard on the LX and the LXi. This model was deleted in 1998, but it came back in 2000 to take the place of the Plymouth Breeze which was dropped half-way through the 2000 model year. The LXi continued until the 2000 model year.
For 1996 a DOHC 4-cylinder engine was available and the Chrysler constructed 2.4 L 4-cylinder engine produced 150 hp and was standard in the LX and was only available with a 4-speed automatic transmission, the same as the V6-powered Cirrus. In this same year, rear headrests were added to the Cirrus. For the following year an all-new center console with storage and integrated armrests were now available for 1997. Both models now included the 4-cylinder engine as standard and the V6 as an option. For 1998 the 4-cylinder engine and the LX trim level were no longer offered.For the 1999 model year, a new open grille was featured with Chrysler's new winged grille badge and chrome wheels, newly standard. A newly introduced featured this year was Sentry Key; a system that disables the ignition unless the proper key was inserted was available. An option on the Lei was alloy wheels with 15-inch wheel covers as standard. Unlike the other 'cloud cars', the Cirrus was the only vehicle that received any type of a facelift over the course of its production. The 4-cylinder engine was returned in 2000 and a 4-cylinder LX model also joined the lineup that included the V6-powered LXi sedan. Standard features now included rear child seat anchorages along with aluminum wheels and an 8-speaker AM/FM cassette stereo, all as standard features.2000 was the final year of production for the Chrysler Cirrus in the U.S. and was eventually replaced by the 2001 Chrysler Sebring sedan tat was built on an updated version of the JA platform that was known as the JR.Though the Cirrus nomenclature was dropped in the U.S. once the Cloud Cars were redesigned, the name remained alive and kicking in Mexico. In Mexico the Cirrus was also marketed and was sold with a turbocharged version of the 2.4 L DOHC I4 engine and a 4-speed automatic transmission with AutoStick. Rated at 168 hp at 5200 rpm, the Cirrus had 216 lb-ft of torque at 2200 rpm. In 2001 the trim levels of the Cirrus were LX and LXi for the sedan while the convertible was available in only one trim level. All of these versions were equipped with automatic transmissions. Two versions of the Mexican Cirrus were available for the second generation; a sedan that came with Chrysler's turbocharged 2.4 L DOHC engine and a convertible that was equipped with the Mitsubishi 2.5 L V6 engine. In 2001 the turbocharged 2.4 L engine was given a power upgrade to 215 hp. Power was increased to 225 hp at 5200 rpm in March 2004 and 235 lb/ft of torque at 4200 rpm. All Cirrus models that featured this engine are easily identified with a 'High Output' badge on the rear of the vehicle. The most current Chrysler Sebring sedan continues to be sold as the Cirrus in Mexico.
In 2007 the third generation Cirrus sedan was debuted. Three engines were available on this model; a 2.4 L DOHC I4 engine that produced 172 hp at 6000 rpm, a 2.7L V6 engine with 189 hp or a 3.4 L V6 engine that produced 232 hp at 6400 4pm. This generation is available in base, Touring and Limited trims. Continuing with the same trim levels as the sedan version in the convertible Cirrus in Mexico.
By Jessica Donaldson