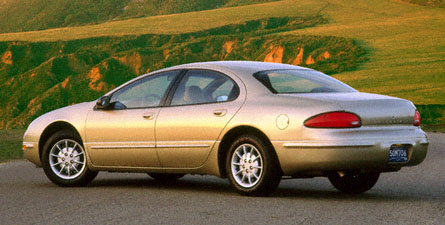 A full-size front wheel drive sedan, the Chrysler Concorde was large and in charge. A bulky vehicle, the Concorde was produced from 1993 until 2004 and was the replacement to the Chrysler Fifth Avenue on the lineup. Related to the Dodge Intrepid, Chrysler's New Yorker and LHS, and the Eagle Vision, the Concorde was one of Chrysler's 3 original Chrysler LH platform models that was derived from the American Motors/Renault-designated Eagle Premier. For 1993 and 1994 the Chrysler Concord was on Car and Driver magazine's Ten Best list.At the 1992 North American International Auto Show in Detroit as a 1993 model the first generation of the Concord was unveiled. Basing their first generation of the Concorde on the 1987 concept Lamborghini Portofino, Chrysler chose to utilize the revolutionary ‘cab-forward' design. This design was characterized by the long, low-slung windshield along with relatively short overhangs. This effectively pushed the wheels into the corners of the vehicle which created a much more spacious passenger cabin, especially in comparison to other vehicles of the time. The first generation of the Concorde lasted until 1997 and was completely redesigned for the 1998 model year.For the 1994 model year, the touring suspension on the Concorde became standard. The base engine also gained 8hp, and a front bench seat was now newly available. Adding more assist was power steering which now reduced turning effort for parking while delivering greater feel at a higher speeds. The following year, upgrades and improvements were made to the transaxle while a modification to the optional remote keyless entry system was added along with the addition of ‘thumb-touch' acceleration and cancel features which were placed on the steering wheel spokes, to the cruise control. 1995 model were now produced with sheet metal front fenders rather than the composite fenders used previously which actually improved structural integrity.
In 1996 the second generation of the Chrysler Concorde was unveiled as the Chrysler LHX Concept vehicle. This model came with large 20' wheels, a closed circuit tv system that was within the windshield pillars which replaced conventional rear window mirrors as well as a centrally located instrument cluster. To allow for rear passenger supplement restraints, storage compartment and rear occupant entertainment center, the wheelbase was expanded to 124 inches.
Two very distinguished trim levels were introduced for 1996, the lower-level LX and the upper-level LXi. In an attempt to make the Concorde a quieter automobile, extra sound insulation along with revised structural engineering was added. For this year, sheet metal front fenders were put on all models in Chrysler's structural upgrade project. Replacing the 'Pentastar' logo was the Chrysler wreath on the grille, horn pad and several other places. For 1997 the only big update for the Concord was the 3.3L V6 engine being dropped s the standard engine on the base LX model.
For 1998, the second generation of the Chrysler Concorde underwent a complete redesign. The following year, the major update included suspension revisions which were softened to enhance ride comfort while also reducing road noise. The interior received all-new, thicker carpeting along with a new standard cargo net inside the trunk. The LXi package now included a CD player along with Chrysler's Sentry Key theft-deterrent system which disabled the ignition unless the correct key was inserted. For the 2000 model year, a sunroof option was available and could be installed on the base model as well as the upscale LXi. To provide a quieter and smoother ride, the Concorde received additional suspension changes. The LX received tires that grew to 16 inches and now matched the ones of the LXi. The LXi edition received standard speed-sensitive, variable-assist steering along with an optional 4-disc in-dash cd changer.The following year, optional front side airbags were added, along with a 3-point safety belt for the rear seat's middle position. The option package on the LX's 22D model now included alloy wheels, while the LXi's optional Infinity's sound system gained steering wheel-mounted controls.In 2002 the ultra lush Concorde Limited was introduced and was 4 inches longer than the basic Concorde and replaced the similar Chrysler LS. This hyper-luxury Limited featured 17-inch wheels and a 'high output' 3.5L V6 engine with 250 horsepower. Limited models received an optionial Pro-Am Edition Group that included 2-tone leather upholstery, matching chrome rimmed spare tire, special interior trim, a set of Taylor Made golf clubs, a unique leather/suede Crysler golf bag, a ‘Pro-Am' trunk organizer for holding the clubs and other golf equipment and exterior ‘Pro-Am' appliqués on the exterior rear windows, all added midyear. No huge updates or changes were made for the 2003 model except for the optional 4-disc in-dash CD changer being replaced with the optional 6-disc in-dash CD changer.
2004 was the final year of production for the Concorde, along with the Intrepid. Also discontinued this year was the Chrysler 300M and the Chrysler 300 replaced in the Concorde in 2004 as the 2005 model.By Jessica Donaldson