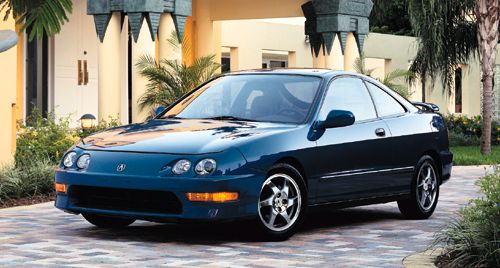 Sold as a Honda in most of the world, the Acura Integra was a compact, sporty vehicle that was sold primarily as a hatchback. Acura's smallest and least expensive model, the Integra was designed as competition to the Volkswagen Golf GTI . Launched alongside the Legend, the Integra was part of the brand new Acura division, the upscale division of Honda. The Acura Integra instantaneously became a sales success as it combined a sporty nature with light weight and high revving engines.Right before this vehicle hit the streets, Honda had decided to follow the trend of re-naming their cars to attain a higher status in the shallow, image conscious U.S. Domestic Market. From this, Acura was born and the following year, the Integra entered the ‘high-end' Honda Lineup. Built from the 1986 Civic platform, the Integra was advertised as Acura's ‘Introductory' model. The same suspension and fuel injection system from the ‘86 Civic Si was also incorporated into the Integra. However the 1.6L DOHC engine was truly a step ahead of the Civic as far as performance.

Introduced in March of 1986, the Acura Integra was only produced for half of the model year. The Integra was the first vehicle available in the U.S. domestic market that came standard with a 16-valve four cylinder engine. Both the 1986 and 1987 models featured a 113 HP engine with an output increase to 118HP for 1988 through 1989. Standard equipment on all 1986 and 1987 Integra's was a 10-slot alloy wheel. 1986 and 1987 models also came with a factory service manual included. Available in both coupe and sedan, the RS (Regular series) was fully stripped down with standard features only including rear window defroster and a tilt steering wheel. The LS (Luxury series) was also available in both coupe and sedan version and builds upon the RS with added standard features such as cruise control, cassette player and alloy wheels. The SE (Special edition) or LS-S (Luxury Series Special) was only available in coupe form, while taking its body from the LS with the addition of power windows, power door locks and a moonroof.
The 3-door Integra was sold from 1986 through 1989 and featured a 1.6-liter DOHC 16-vlve 4-cylinder engine with 113 hp at 6250 rpm. With 99 lbs-ft of torque at 5500 rpm, the original transmission of the Integra was a 5-speed manual/4-speed automatic. The first Acura Integra model was introduced on March 27th 1986. For the following year the engine output was increased to 118 hp and 103 lbs-ft of torque and featured all new redesigned front and rear bumper. The interior was also restyled while the LS Special Edition showcased body-color wheels and trim with special badges.