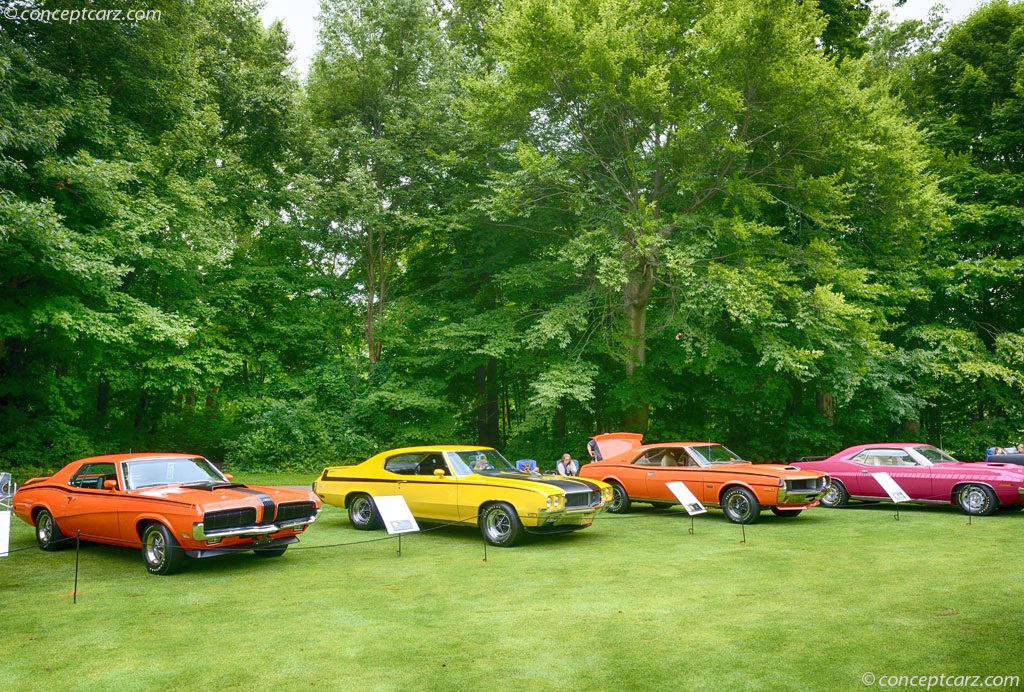 The Buick Gran Sport was produced from 1965 through 1975 and began life as an option on the Skylark. Under the hood was a powerful 401 cubic-inch eight-cylinder engine producing 325 horsepower and 445 foot-pounds of torque. Zero-to-sixty took just under eight seconds while the quarter-mile could be reached in about 16.6 seconds. The option proved to be highly successful with around 16000 examples being produced in its introductory year. The two-door hardtop was the most popular with over 11,000 being produced. A two-door coupe and convertible was also available, both with over 2,000 examples selected.

The second year brought more horsepower and updated styling. The 401 cubic-inch engine now produced 325 horsepower and 340 horsepower depending on configuration. The Skylark had been given a slopping rear sail panel which the Gran Sport was easily identified by its dark grilles, hood scoops, front fender vents, and GS badging. These improvements did not bring the desired results as sales fell to just under fourteen-thousand. The two-door hardtop configuration was again the popular choice with almost 10,000 being produced.

The revitalize interest in the vehicle introduced two versions of the GS, the GS400 and GS340. The numbers in the name symbolized the cubic-inch size of the engine. The 401 cubic-inch engine was replaced by an improved 400 cubic-inch unit. Though slightly smaller in size, it was smoother, sportier, and more responsive than the power-plant it replaced and still produced the same 340 horsepower rating as its predecessor. The GS 340 was equipped with a 340 cubic-inch engine that produced 260 horsepower and 365 foot-pounds of torque. Performance and versatility continued with the introduction of a three-speed automatic gearbox; a three and four speed manual gearbox was also available. Sales held steady but below expectations, with production almost equal to the prior year.

The chassis of the GS was revamped for 1968, becoming smaller in size. Though it became smaller its overall weight increased due to the design and materials used. The 400 cubic-inch engine remained the same while the 340 was enlarged to 350 cubic-inches. Power output rose to 280.

A Stage 1 Special Package was offered which added improvements to the engine, modified suspension, and a better transmission. The result was 345 horsepower and a drop in the quarter-mile by more than a second.

A new model, the California GS, became available in 1968. It was outfitted with a 350 cubic-inch engine, California badging, vinyl top, chrome wheels and trim, and a two-speed automatic transmission. It was only sold in California.

Sales climbed to over twenty-thousand examples in 1968.

A Stage 2 option was added which increased horsepower to 360. Performance throughout the entire lineup was improved due to a functional hood scoop which forced cold-air into the engine. Unfortunately, sales plummeted by almost half. Buick responded in a year later by ignoring its policy of using engines that were no larger than 400 cubic-inch in size in their compact and intermediate body styles. The 400 cubic-inch engine was replaced by a 455 cubic-inch power-plant that produced 350 horsepower and 510 foot-pounds of torque. The engine was accompanied by a restyled exterior.

The Stage 1 option added improvements to the engine and other mechanics resulting in over 360 horsepower. The California option was no longer offered while the GS350 received an increase in power, now producing 315 horsepower and 410 foot-pounds of torque.

1970 also brought a new option, the GSX. The GSX was available in only two colors, Yellow or Apollo White. Included in the package were larger tires, improved suspension, hood tachometer, body stripes, and a front and rear spoiler.

For the 1970, sales increased to over 20,000 units. This trend would not continue due to new government safety and emission regulations. Rising gasoline prices and an impending oil embargo brought manufacturers adjusting the model line up and engine offerings to compensate. All engines for the Buick GS were detuned. The 350 cubic-inch was rated at 260 horsepower; the 455 cubic-inch was rated at 315 horsepower; and the 4551 cubic-inch Stage 1 produced 345 horsepower. The GSX package was now offered in multiple colors. Sales reflected the drop in horsepower in 1971, with just over 9000 examples being produced. The two-door hardtop was by far the favorite, with over 8,000 examples being sold. Less than a thousand convertibles were produced.

The trend of decreased horsepower and better fuel economy continued throughout the early 1970s. In 1972 less than 9000 examples of the Buick GS were sold. General Motors made the decision to make the GS its own model line for 1973. The GS was moved to the Buick Century Coupe chassis. With decals, wide tires, and dark grille and headlamps, the Buick GS was easily identifiable. The base engine was a 350 cubic-inch eight-cylinder which now produced 150 horsepower. The top of the line engine was the Stage 1 455 cubic-inch eight-cylinder which produced 270 horsepower. With this option, the zero-to-sixty took less than nine seconds which the quarter mile was accomplished in just over 15 seconds.

The only option available on the GS in 1974 was the 350 cubic-inch V8 in either two or four-barrel carburetor configuration. The platform was again changed, this time finding a home atop the Apollo platform.

In 1975 the GS was again an option on the Century platform. A Gran Sport 231 cubic-inch was introduced.
by Daniel Vaughan | Aug 2011

The Buick Gran Sport was produced from 1965 through 1975 and began life as an option on the Skylark. Under the hood was a powerful 401 cubic-inch eight-cylinder engine producing 325 horsepower and 445 foot-pounds of torque. Zero-to-sixty took just under eight seconds while the quarter-mile could be reached in about 16.6 seconds. The option proved to be highly successful with around 16000 examples....
Continue Reading >>

On General Motors' prestige ladder, Buick was traditionally positioned a step below Cadillac. It was an elegant and dignified car that was often described as a 'doctor's car.' As the muscle car era rumbled to life even Buick entered the fray with Gra....[continue reading]

The GS series was Buick's entry into the intermediate-size muscle car market. In 1969, The GS was available with either a 350 or 400 cubic-inch engine. For 1970, the engines were the 50 and the 455. The 455 was equipped with functional hood scoops....[continue reading]

In the 'Muscle Car' category, the Buick GSX certainly checked every box. After receiving a green light, Buick's product mangers wanted to do what Pontiac, Chevrolet, and Oldsmobile had done - installed a big-inch V8 into an intermediate-sized coupe. ....[continue reading]

In the period from 1969-1972, the Muscle Car wars were at fever pitch. When Pontiac introduced the GTO Judge in 1969, with wild 'Carousel Red' (Orange) paint and multi-color stripes, they grabbed the attention of the media and of course, the young ma....[continue reading]

In 1970, all of the domestic auto makers were working hard to get a piece of the youth market. Big engines in smaller bodies were the rage and wild colors and graphics only added to the appeal. Even companies that were known to be a bit conservative ....[continue reading]

This is the 153rd GSX built in late March 1970. It's a unique example because of its rare combination of options. It came with the 'Stage 1' option which includes the 455 cubic inch engine with a hotter cam and larger valves, a 3.42 posi reared, 4-sp....[continue reading]