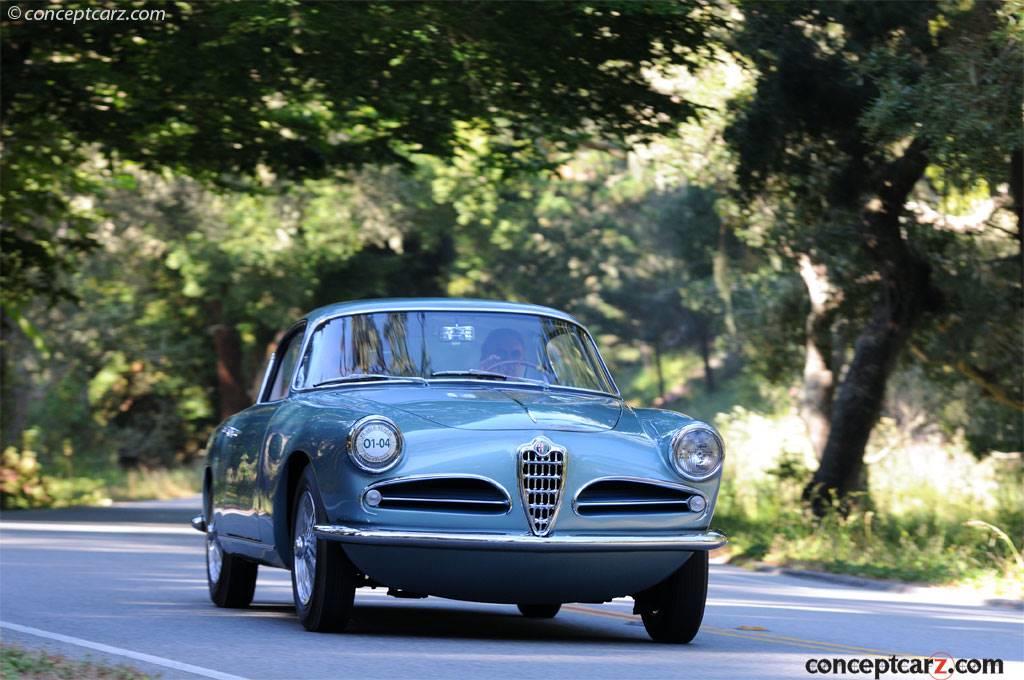 Much of Europe was devastated by bombing and attacks during World War II and factories that had been producing vehicles switched to producing materials and vehicles in support of the war efforts. The war ended in 1947 and by 1950 Alfa Romeo had a new vehicle ready for serious production. It was designed by Dr. Orazio Satta Puliga and was the first Alfa Romeo to use unitary construction. Under the hood was a four-cylinder engine with dual-overhead-camshafts which was a tribute to the companies racing history. The suspension was also sporty with an Independent front suspension with wishbones and coil springs. In the rear was a live rear axle.

This was a very important vehicle for Alfa Romeo as the company struggled to regain its market-presence after the war. The 1900 was produced by Alfa Romeo in a variety of bodystyles with the sedan being the most popular. Though custom coachbodies was not as prevalent after the 1940's, nearly every major Italian Coachbuilder created a coupe or cabriolet version of the vehicle. Part of the popularity was the vehicles sporty characteristics which made it easier for the coachbuilder to design and create attractive bodies.

Touring created three series of Super Sprints on a shortened version of the chassis. As mentioned before, the majority of the vehicles were sedans and only 10% of the vehicles created sat atop a shortened (corto) chassis. It is estimated that Touring created around 965 examples of the corto chassis, each were hand built and created as a special-order purchase. Many of the details were left up to the consumer to cater to their every wish and desire.

The examples created by Pinin Farina were mostly cabriolets. Zagato created 41 examples with most being coupes and two being convertibles. The bodies by Zagato are considered some of the most memorable and exciting of all the custom built Alfa Romeo 1900's.

When the 1900 was first introduced it was powered by a four-cylinder engine that produced an adequate 90 horsepower. A few years later the Ti version was introduced which raised the horsepower to about 100. Throughout the years, horsepower would again be improved and specifications varied.

Production of the 1900 lasted for ten years with more than 21,000 examples produced.
By Daniel Vaughan | Apr 2007The Alfa Romeo 1900 Series was produced from the very early 1900s through 1959. It was designed by Italian designer, Orazio Satta, and became the company's first car built on a production line. This vehicle signaled a radical departure from the type of business Alfa Romeo had constructed in the pre-War era. This shift towards an affordable production automobile was a necessary evolution for the company and a gamble that would prove to be the correct endeavour. In the pre-War era, the company had created expensive and powerful performance machines. Other marque's, such as Delahaye and Talbot Lago, had also be renowned for their performance machines, and had continued to cater only to this type of business in the post-War era. By the close of the 1950's, Alfa Romeo was still in business, while Talbot and Delahaye both were not.

In keeping with Alfa Romeo's tradition, Satta was given the difficult task of creating a vehicle that was affordable and could be mass produced, yet still retain the company's heritage of quality and performance. What was created was a major advancement, as the vehicle was given a unitary construction where the body worked as part of the chassis and housed many of the mechanical components. Prior to this, the body and chassis had been constructed separately, which was a traditional method by most marque's. The unitary construction made mass production much easier, allowed cost to remain low, and kept the vehicles performance to maximum. The major drawback to this type of construction was the difficulty it provided with custom coachwork.

The design of the vehicle was perfected by the Alfa Romeo designers with the help of wind tunnels. The vehicle was given a very aerodynamic body that was elegant and memorable. Under the bonnet was a four-cylinder engine that displaced 1884cc and fitted with dual overhead camshafts. Horsepower was impressive considering the engines size, rated at around 90 which put it on par with the larger 6C 2500 six-cylinder engine. The engine was placed in the bay at a longitudinally angle, matted to a four-speed manual gearbox with steering-column levers, and powered the rear wheels. Top speed was achieved at just over 105 mph.

The vehicle was attractive, sporty, and elegant. It was a fine addition to Alfa Romeo's proud heritage and their quest to create a more affordable, mass produced automobile. 7,400 base model examples were produced between 1950 through 1954 making it their most popular vehicle to date.

One year after the vehicles introduction, Alfa Romeo introduced the Ti and Super versions. Both were created in a way that provided flexibility to coachbuilders to create a wide range of custom bodies. The list of builders included Ghia, Touring, and Pinin Farina. The list of body styles ranged from racing machines to two-seater luxury automobiles. The Super body style had a shorter wheelbase and was an excellent platform to create sporty versions of the 1900.

By 1954, Alfa Romeo introduced a larger engine that increased horsepower even further. The top-of-the-line version in terms of performance was the Super Sprint, which offered 115 horsepower. It seems that after Alfa Romeo secured their initial goals of creating an affordable automobile, they immediately searched for ways to improve upon its performance.
By Daniel Vaughan | Aug 2007

Most of Europe was devastated during the bombing raids or ground attacks that occurred as a part of World War II. Factories which had produced motor cars had been switched to wartime production, and in the early 1950's were slowly being returned to t....[continue reading]

One of only Six Built!
The company that became Alfa Romeo was founded as Societa Anonima Italiana Darracq (SAID) in 1906 by Cavaliere Ugo Stella, an aristocrat from Milan, in partnership with the French automobile firm of Alexandre Darracq.....[continue reading]

An English Visitor of Italian Ancestry
Felice Bianchi Anderloni of Milan established Carrozzeria Touring in 1926 and by the 1930's his firm had become one of Italy's leading coachbuilders. Anderloni developed the patented 'Superleggera' (s....[continue reading]

Most 4-cylinder 1900s were sedans, the Portello, Milan plant building 17,390 of them out of a total of 21,304. Most of the coachbuilt coupes (including Sprints), Spiders and Cabriolets were built by either Pinin Farina or Carrozzeria Touring (the lat....[continue reading]

The 1900 was Alfa Romeo's first postwar model, and it stayed in production for nearly 10 years. It was more compact than Alfa's prewar 6C 2500 and was powered by an iron block and aluminum-head, 4-cylinder twin-cam engine. Apart from the factory mode....[continue reading]