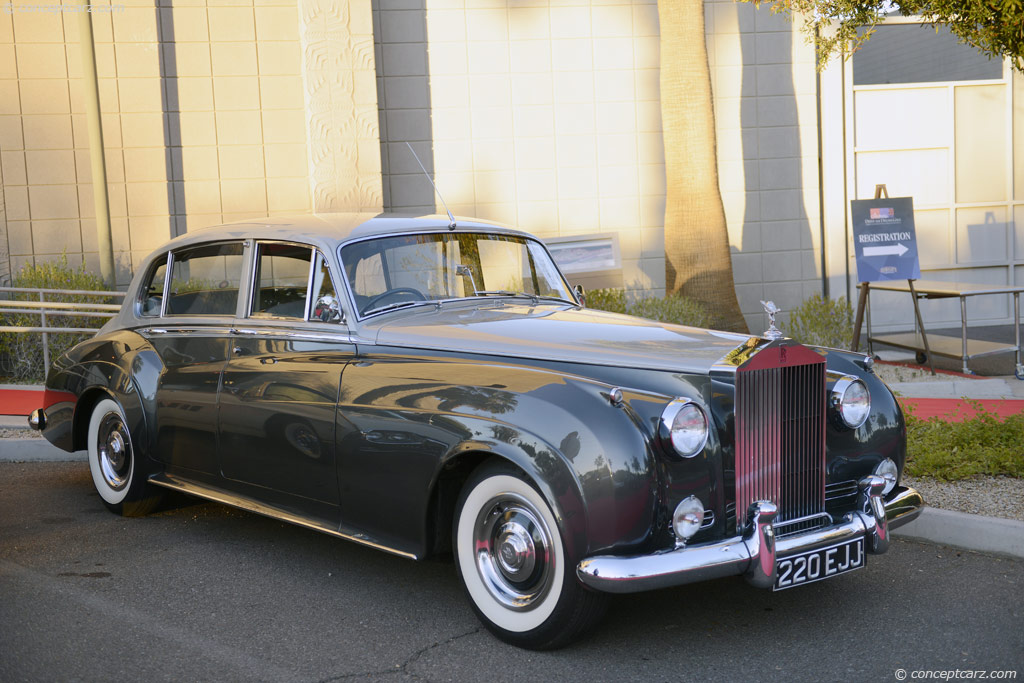 There were just 2,717 examples of the Silver Cloud II chassis produced, of which most rested on the short 123-inch wheelbase. Of this, just 107 examples were clothed in H.J. Mulliner coachwork in drophead Coupe configuration. ....[continue reading]

Known as the 'Proper Motorcar', most Rolls-Royce Silver Clouds were five passenger sedans, while this particular automobile is a highly unusual long wheelbase limousine. This automobile is currently in its third ownership. It was originally built f....[continue reading]

One of the last of only 75 left drives built 1960-1962, this never damaged or corroded Beverly Hills - delivered example has traveled only 52,577 miles since new. Equipped as originally supplied with optional air conditioning, split bench seating an....[continue reading]

This 1962 Rolls-Royce SCT100 Touring Limousine was offered for sale at the 2007 Blackhawk Collection Exhibit held at the Pebble Beach Concours. It carried a price tag of $225,000. It is the extremely rare SCT 100 Touring Limousine on a Silver Cloud....[continue reading]

LSZD161 is a 1962 Rolls-Royce H.J. Mulliner Cloud II drophead. The original owner was Arthur Wheeler of Palm Beach, Florida. This is one of 75 LHD Cloud II dropheads produced.....[continue reading]

Rolls-Royce replaced its original Silver Cloud model with the Silver Cloud II. It brought with it a 380 cubic-inch V8 engine, which was built to a sophisticated designed utilizing numerous lightweight components. The engine was mated to a smooth-shif....[continue reading]

The long-wheel base version of the Rolls-Royce Silver Cloud rested on a 127-inch wheelbase. Of the 2,717 Silver Cloud II chassis models produced, only 299 were the long-wheelbase version. This particular example is a rare factory left-hand-drive mode....[continue reading]

This Rolls-Royce Silver Cloud II is finished in burgundy and black paint with a beige interior. It has a rebuilt engine and rebuilt transmission.....[continue reading]

Aston Martin AM37S powerboat will be displayed at the 58th Fort Lauderdale International Boat Show on November 1- 5, 2017 Quintessence Yachts will again collaborate with Feadship, after a successful...

Total 1962 Rolls-Royce Silver Cloud II production: 0
© 1998-2020. All rights reserved. The material may not be published, broadcast, rewritten, or redistributed.