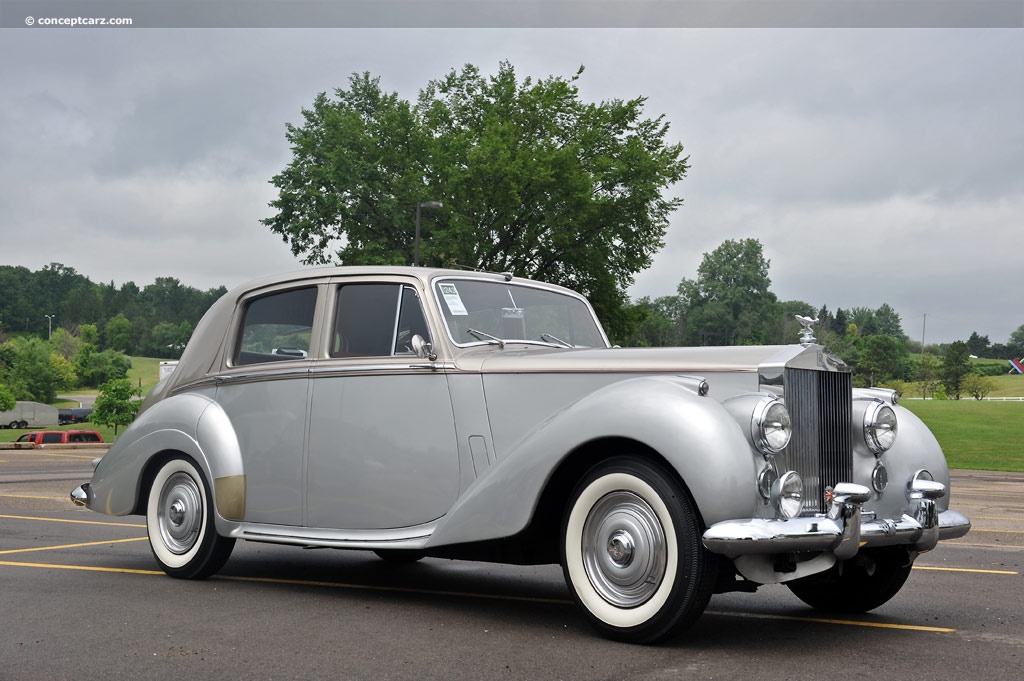 The Rolls-Royce Silver Dawn, introduced in 1949 and produced alongside the Bentley Mark VI and the coach built Rolls-Royce Silver Wraith, is notable as the first Rolls-Royce to wear 'factory' coachwork, with the 'standard steel' coachwork having been introduced in 1946 on the Mark VI. Along with its body, it also shared the Mark VI chassis until 1952 and then the Bentley R Type until production ceased in 1955. A total of 760 examples were produced during its production lifespan.

The Rolls-Royce Silver Dawn was initially built as an export-only model. Examples built with left-hand drive configuration had column gear shifts while the right-hand-drive examples had a floor gear shift by the door. From October 1953, with the R-Type based models, was it officially available on the home market. Earlier models, up to circa May 1954, had a different dashboard from the Bentley Mk. VI and R-Type and were fitted with a single exhaust system.

Power was from an inline six-cylinder engine with overhead inlet and side exhaust valves and a capacity of 4275cc until 1951 when it was enlarged to 4566cc. The carburetor was a single downdraught Stromberg until 1952 when it was replaced by a Zenith. Servo-assisted 12.25-inch drum brakes were hydraulically operated at the front with mechanical operation at the rear. The suspension used a live rear axle with half elliptic leaf springs along with an independent front setup with coil springs. Most examples wore factory built bodies, and others were sent to external coachbuilders. The Standard Steel bodied were similar to the Bentley but with body panels forward of the bulkhead/firewall being slightly different.

A four-speed manual gearbox was standard until late 1952 when a four-speed automatic became optional.

The launch of the Silver Dawn in 1949 confirmed the publics acceptance and demand for the standard steel body, as only a few were fitted with specialized coachwork. After the war Rolls-Royce decided that if increasing volume was their main objective, then the manufacture of complete motor cars was required. This meant designing a pressed steel body and modernizing some of their production methods. The....
Continue Reading >>

The Silver Dawn was exhibited for the first time at the 1949 Toronto, Canada International World's Fair. This was a car that was intended to be driven by their owners, rather than be driven in it. Initially, it was available for export-only, until 19....[continue reading]

This 1954 Rolls-Royce Silver Dawn is one of 730 examples built from 1949 through 1955. It was previously owned by Rolls-Royce and Ferrari collector Bill DeCarr. In 1987, Mr. DeCarr became custodian of this rust-free Rolls-Royce and during his ownersh....[continue reading]