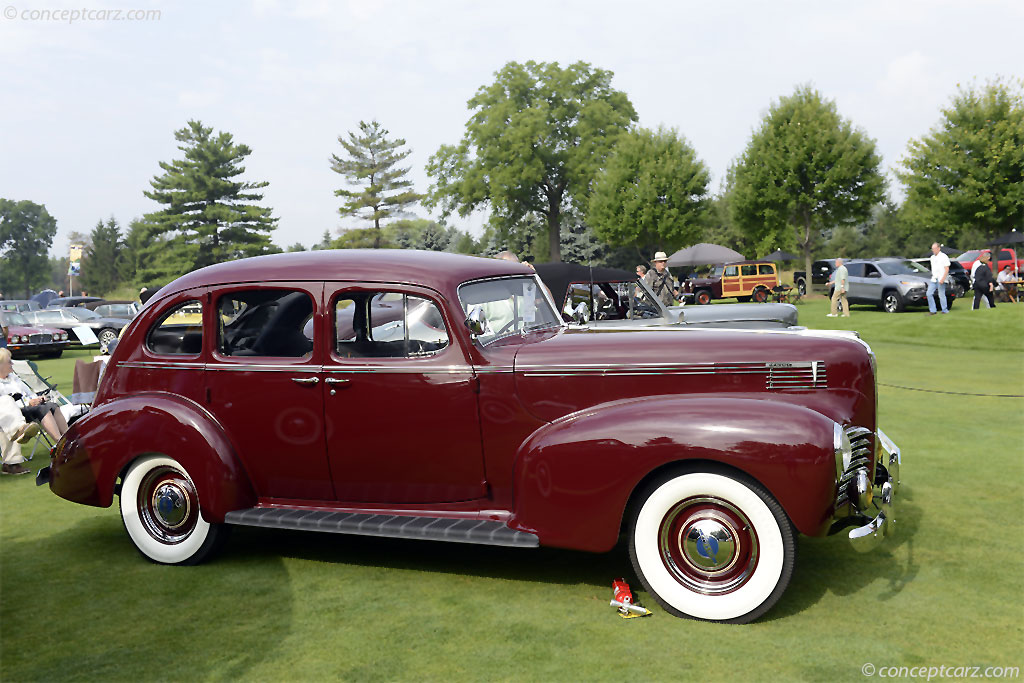 Touring Sedan
Chassis #: 44-1309
Sold for $77,000 at 2018 Worldwide Auctioneers : Hostetlers Hudson Auto Museum Auction.
The Hudson Motor Car Company was established in 1909, just as Ford Motor Company was going into high gear with the Model T. Henry L. Hudson, of department store fame, led an investment consortium of eight Detroit businessmen in financing the new company. The executive cadre was composed of Roy D. Chapin, Roscoe Jackson, Howard Coffin, and Frederick Bezner, all of whom had served with Ransom Olds during the merry Oldsmobile days.The annuals of Ford and Hudson became loosely linked with Eleanor Clay, Hudson's niece, married Edsel Ford in 1916, but Hudson remained independent until it was absorbed by American Motors in 1954. That marriage lasted until 1957, when Hudson disappeared entirely.Although its cars were powerful and up-to-date technically, the company was still struggling to show black ink on its books in the late 1930s. The 1940 Hudson model line made its debut in September of 1939. It brought with it a new modernistic design that was well received and continued to gain popularity into the late 1940s. In the front was a new two-element grille design that featured larger horizontal bars. All models could be purchased with or without running boards at no additional cost. Other updates included an independent front suspension, revised styling, and a range of seven models. They had an optional semi-electric Warner overdrive.
The prior year's Hudson 112 Series entry-level model was no longer available as it was replaced by three Series 40 Models, all resting on a short 113-inch wheelbase chassis, consisting of the 40T Traveler Six, 40P Deluxe Six, and Series 40C Business car. The mid-range options were the Series 41 Super Six, Series 44 Hudson Eight, and Series 45 Deluxe Eight. These mid-range models had a 118-inch wheelbase. The top-of-the-line 1940 Hudson was the 43 Country Club Six and Series 47 Country Club Eight, having a long 125-inch wheelbase. The Series 40C Business cars were supplemented by the Series 48P Big Boy Six and Series 48C Big Boy Business models, both with a 125-inch wheelbase chassis.
The 1940 Hudson vehicles were well received, with nearly 88,000 examples sold. The Model 44 included six body styles on a 118-inch wheelbase, all powered by an inline eight-cylinder engine. Hudson's flathead eight made its debut in 1930, and by 1940 had expanded to 254 cubic-inches and 128 horsepower. The model 44 four-door sedan sold new for $952.The Series 44 Hudson Eight was nearly identical to the Series 41 Super Six but with an eight-cylinder engine. It was the least expensive of the company's three eight-cylinder model lines. The current owner acquired a Series 44 in 1940 and drove it until 1948, when he acquired one of the new postwar step-down models. But he never forgot his Series 44, and when a friend from Indianapolis offered this example, he snapped it up. It is finished in the period-correct maroon paint and has running boards. The interior is finished in period-correct gray cloth and the seats, door panels, carpets, and headliner all matching and like new. Period correct accessories include the head- and tail lights, bumpers, hubcaps, dual spotlights, a radio, fog lamps, bumper guards, dual wipers, a heater, and a clock.Power is from a 254 cubic-inch L-head eight-cylinder unit fitted with two-barrel Carter carburetors offering 128 horsepower. There is a three-speed manual transmission and four-wheel Bendix hydraulic drum brakes. 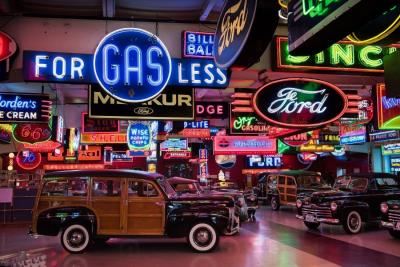 RM Auctions to offer the remarkable cars and collectibles from the collection of the esteemed Mr. Michael Dingman, weekend of 22 June Held in Hampton, New Hampshire, the two-day sale will see over... 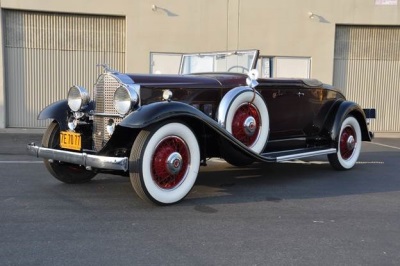