Suggested vehicles
Specification comparison
Related news
In 1936, the Morgan 4/4 was first introduced as Morgan Motor Company's first car. The '4-4', which would later come to be known as '4/4', stood for four cylinders and four wheels. The vehicles that Morgan had produced prior to the 4-4 were three-wheelers, with V-twin engines.

Throughout the years, there have been many variations, body styles, and series of the original '4-4'. Production of the '4-4' has been nearly constant since the beginning, except for a short halt of production during World War II. During the War, it manufactured anti-aircraft gun parts and undercarriage components.

From 1936 through 1939, there were 663 two-seater versions produced. All with a four-speed Meadows transmission. They featured an 1122 cc. Coventry Climax engine with overhead inlet and side exhaust valves that produced 34 horsepower. The morgan was quick with a top speed of 80 miles-per-hour and a 0 to sixty time of around 28 seconds. A year after the introduction, a four-seater option became available. Though not as popular as the two-seater, 99 were produced from 1937 through 1939. In 1938 the DropHead coupe variation was introduced of which, 58 were produced between 1938 to 1939.

Production took a break during World War II, but later resumed. From 1946 through 1950, 2490 more examples were constructed and used a Standard Special 1256 cc. overhead cam engine producing 38.8 horsepower. A Moss transmission was used in place of the Meadows gearbox. The four-seater and drophead coupe options were still available. During the 1946 to 1950 time frame, 140 four-seaters and 106 DropHead coupes were produced.

In 1949, when the 1267 cc was no longer available, Morgan began using a Vanguard 1.8 litre engine and introduced to the public the 'Plus Four'. Eventually, a 2080cc Vanguard engine that produced 68 horsepower was used. The front suspension was improved, the frame was strengthened, and Girling hydraulic brakes were fitted on all four corners. The top speed was 85 miles per hour with a zero to sixty time of 17.9 seconds. Priced competitively, the Plus Four was an instant success.

In 1954 the Vanguard engine was replaced with a Triumph TR2 1991 cc. powerplant that provided 90 horsepower. The zero to sixty time was now around 13 seconds. The 100-mile-per-hour mark was easily achievable. To help with the aerodynamics, the radiator was placed beneath the bodywork.

In 1956, the Plus 4 received a Triumph TR3 engine that was capable of producing 100 horsepower. The vehicle could be ordered in lightweight aluminum bodies making them excellent for competition. In 1959, performance and safety were enhanced by the addition of 11-inch Girling disc brakes.

The Series III picked up where the Series II left off. Mounted in the front, the Ford Anglia 105E, 997 cc. engine was capable of producing 39 horsepower. The three-speed transmission was replaced with the four-speed gearbox adding to the performance of the vehicle. During its production life span which last from October of 1960 through November of 1961, only 58 examples were produced.

During the 1963 Earl's Court Motor Show, Morgan introduced the Plus 4 Plus. The Plus 4 Plus featured a stronger Plus 4 chassis, glass fiber body, and a 2138 cc. Triumph TR4 engine. The top speed was around 100 miles per hour. Unfortunately, the car did not sell very well and production ceased two years later. Only twenty-six examples were produced.

In 1966, the Triumph TR engine was replaced with a powerplant supplied by Rover Motor Company. The engine was an aluminum V8 engine that brought about the Morgan Plus 8, a project headed by Maurice Owen. The Plus 8 was not introduced to the public until the 1968 Earls Court Motor Show. The 3529 cc. V8 engine was capable of producing 160 horsepower at 5200 rpm. It was fast! With a 0 to sixty time of 6.7 and a top speed of 125 mph, it was a substantial improvement over the Plus 4.

The Morgan 4/4 has stood the test of time. The light and sturdy frame matched with some impressive power plants have made the vehicle practical, cost-competitive, and fun to drive.
By Daniel Vaughan | Sep 2009 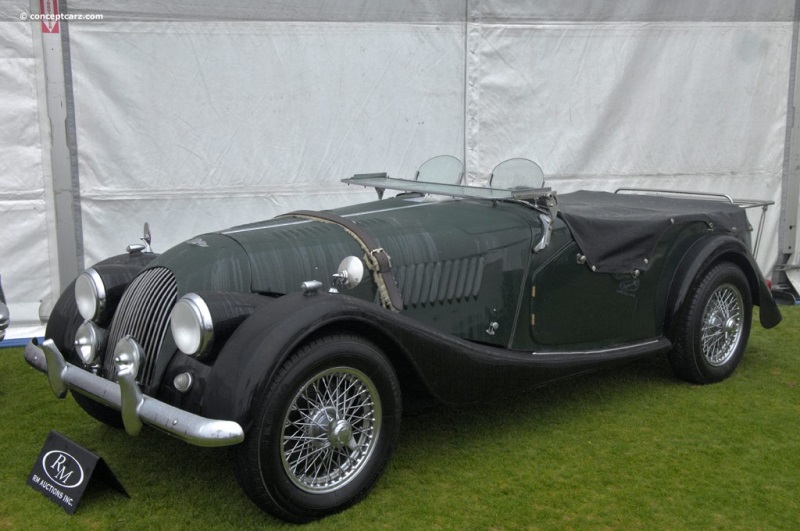