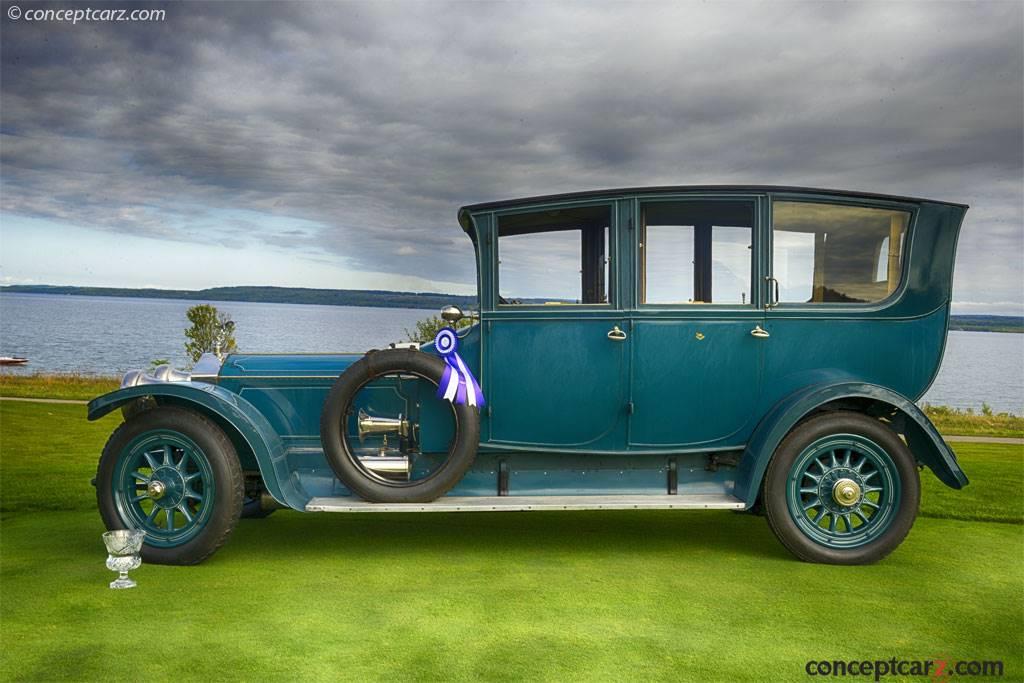 Henry Royce's new six-cylinder, 40/50hp Rolls-Royce was launched at Olympia in 1906. The engineering genius of Royce combined with the charisma and charm of the Hon. Charles Stewart Rolls and the business flair of Claude Johnson elevated the new model to 'The Best Car in the World' (first used by the Pall Mall Gazette in November 1911). Advertisements in Autocar in 1907 read: 'Silent as a Ghost, Powerful as a Lion, Trustworthy as Time.' Another early advertisement for the company carried the testimonial from a new Silver Ghost owner: 'I may say my car is a perfect dream. It is so reliable that I have done away with my carriages and horses.'

Chassis number 60551 was displayed at the 1906 London Motor Show wearing touring coachwork by Barker & Co. and silver paint, eventually leading to the nickname, the 'Silver Ghost.' Most of the cars on the road were noisy and vibrated so violently that they often scared horses. Chassis 1701, however, was ghostly quiet. This 'Silver Ghost' was such a marketing success that Mr. Royce standardized on this one model and concentrated on improving it as each new design or invention was thoroughly tested before being implemented into the chassis. Prior to 1908, when it relocated to a new factory in Derby, the Rolls-Royce company had manufactured a variety of models at its Manchester premises. The list included two, three, four and six-cylinder models, and even an abortive V8, before Managing Director Claude Johnson focused the company's attention on building the range-topping 40/50hp.

Chassis number 60551, the factory demonstrator, successfully completed a 2,000-mile trial under RAC supervision. It was then entered in the 1907 Scottish Reliability Trial, completing the 15,000-mile run and setting a new World Record.

Rolls-Royce's principal rival, around 1910, was Napier. To prove which manufacturer built a better automobile, Napier and Rolls-Royce agreed to compete in a top-gear-only run from London to Edinburg, Scottland. Gear changes, even from the start, were not allowed. The contest was supervised by the Royal Automobile Club (RAC). The RAC documented fuel consumption and the highest speed achieved by these two cars on the Brooklands racetrack. The Napier automobile had a driver and three adult passengers. It finished the test with 19.35 fuel consumption and a maximum speed of 76.42 mph. The Rolls-Royce car was driven by Works tester, E. W. Hives, and carried three adult male passengers. The chassis was number 1701E (British registration plate number, 'AX201') and it began its journey on September 6th of 1911, leaving London for Edinburgh using top gear only. It wore a lightweight touring body and achieved the run averaging 24.32 mpg, and a maximum speed of 78.26 mph at Brooklands. It had traveled approximately 800 miles north mainly via The Great North Road and returning down the west side of the country.

Rolls-Royce had beaten Napier in both fuel economy and maximum speed. The lightweight touring body was so well received that the company began to produce a full series of London-to-Edinburgh tourers for interested buyers. This resulted in the creation of 188 of the special chassis, which became known as duplicates of No. 1701. The first production models being delivered to the coachbuilders in the Spring of 1912 and the last, no. 2699, in October 1913.

The 40/50 HP was the model designation in accordance with the former British tax racing system. Colloquially referred to as 'The Silver Ghost,' production continued in the Cooke Street Works in Manchester, England until 1925 and no fewer than 6,173 were built in the U.K. with an additional 1,703 created at the Springfield Factory in the United States (from 1920 to 1926). Cars built in the U.S. had hub centers with an indentation for the wheel spanner; U.K.-built wheel hubs are flat.

The body of the Rolls-Royce was hand-built per the specification, needs, and desires of the purchaser. Rolls-Royce built no car bodies prior to 1939, however, they were particular about who they allowed to build bodies for their chassis. Some Silver Ghosts were delivered from new with more than one body - often a formal closed design as well as an open design. This allowed the bodies to be changed to suit the occasion or climate.

The Silver Ghost was powered by a 7,036cc side-valve six equipped with a seven-bearing crankshaft and pressure lubrication. While other six-cylinder vehicles often suffered from the long and flexible crankshafts that induced vibration and harsh noises, Royce's design used larger bearings and a pressurized oiling system, secured by seven main bearings and contained in a strong and rigid crankcase. The design allowed for removable cylinder blocks with fixed heads, eliminating leaks and cooling problems. By casting them in triplets, the engine was shortened and lightened. Reliability and thorough combustion were ensured via twin ignition (by magneto and distributor and coil) - at a time when many cars used a single ignition system. The manifolds and new twin-jet carburetor, developed by Royce, provided superior breathing and airflow. With a low compression of just 3.4:1, the Ghost produced generous amounts of torque while turning at just 1,250 RPM.

The crankcase was formed from aluminum alloy and the timing drive and ignition were driven by gears, not chains. Ground and polished by hand, the timing gears were made of nickel steel and phosphor bronze. Mr. Royce's demand for precision and perfection resulted in the crankshaft being ground to an accuracy of .00025 on its bearing surfaces. They were then hand-polished to ensure that any minute scratches left by the grinder were removed.

The chassis was comprised of channel-section side members and tubular cross members were suspended on semi-elliptic springs at the front and a 'platform' leaf spring arrangement at the rear, though the rear setup was soon revised.

Engine displacement grew to 7,428cc, and the original four-speed gearbox was replaced in 1909 by a three-speed unit. In 1913, it reverted back to four-speeds but with a direct top gear. Drivers of the era were unaccustomed to shifting and running in top gear only provided a smooth ride, particularly when the owners were generally the rear passengers. The Ghost had an admirable reputation of being able to accelerate from a standing start to top speed without shifting, and performing this task silently.

During its two-decade production lifespan there would be numerous other improvements to the car, one of the most important being the adoption of servo-assisted four-wheel brakes towards the end of 1923.
by Daniel Vaughan | Jun 2020

In 1907, when horses were still the preferred mode of travel and automobiles were loud, smelly and unreliable, Henry Royce and C.S. Johnson of Rolls-Royce, Ltd., unveiled a one-of-a-kind, silver-plated, whisper-quiet 40-50 horsepower legend, the 'Sil....[continue reading]

Known simply as 'The Best Car in the World,' the 40/50 hp Rolls-Royce was produced from 1907 until 1926. The name 'Silver Ghost' was given to the 13th 40/50 produced, that was used by the company for test runs and reliability trials. That car was s....[continue reading]

This Silver Ghost with sporty five-seat touring coachwork by Barker was first owned by Sir Samuel Hordern, President of the Royal Automobile Club in London. The London to Edinburgh style with its tapered bonnet, leather spring gaiters and brass fitti....[continue reading]

Road tests were completed on April 23, 1912, and this car was supplied to its first owner, Frederick Smith, Esq. of Bowden, Chesire, England, with a Touring Cockshoot Body Number 684 and registered CC 41. Used in France as a staff car during the Grea....[continue reading]

Over the last one hundred years, this Silver Ghost has worn many guises! Originally built with an HJ Mulliner Landaulette body, it was then used as a trials car by the Rolls-Royce Company, and was later outfitted as a truck! When it was first sold in....[continue reading]

This car, with Torpedo body by Labourdette, was the fourteenth Tourer built to commemorate the London to Edinburgh driving event. It was shown at the Paris Auto Salon before being sold to an owner in Buenos Aires, Argentina.....[continue reading]

This 1912 Rolls-Royce Silver Ghost was first built with Landaulette coachwork by Hooper and sold to its first owner in London. After many years and rather a hard life it was discovered on a farm in Yorkshire in a very sad state of repair. Due to its ....[continue reading]

Chassis number 1888 was delivered January 30th of 1912 to Sir Arthur du Cros, MP of London, with a Regent Carriage Limousine body. It was re-bodied as a two-seater in the 1920s. In 1928 it went to Queensland, Australia. ....[continue reading]

The automobile industry was still in its infancy when Rolls Royce introduced their Silver Ghost in 1906. With its arrival, it set a new level of refinement, agility, comfort, and luxury. At the time, it was considered the most advanced automobile tha....[continue reading]

Rolls-Royce introduced the 40/50 HP model, later called the Silver Ghost, in 1907. In 1911, one of its main rivals, Napier, challenged Rolls-Royce to an endurance trial driving from London to Edinburgh, a distance of over 800 miles on largely unpaved....[continue reading]

This car, chassis and engine number 1907, is a Silver Ghost Double Pullman Limousine with coachwork by Barker. It has a long-wheelbase providing plenty of interior room for the passengers. It is lavishly equipped and sumptuously detailed in every d....[continue reading]

This Rolls-Royce 40/50 was nicknamed 'Ladybird' by its original owner, Lady Flora Eaton of Toronto. One of three Rolls-Royces delivered to her in 1913 (the other two –'Yellowbird' and 'Bluebird' – were open touring cars) Ladybird was rare for its clo....[continue reading]

Manufactured in 1912 and sent to the renowned coachbuilders Barkers of London, who constructed and fitted a very stylish open touring body for the first owner, Dr. Frank Tidswell of Sydney, Australia.

Records indicate that by 1957, the origi....[continue reading] 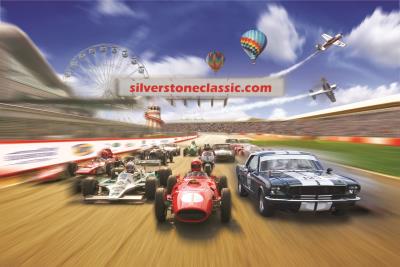 Just days to go before the dawn of another unmissable blockbuster Record grids, special anniversaries and great entertainment for all ages Top Ten attractions at the worlds biggest classic motor r... 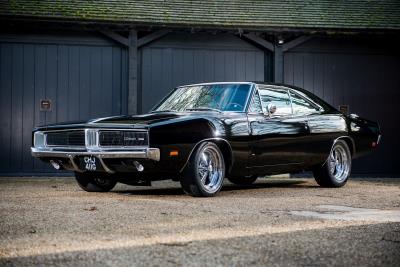 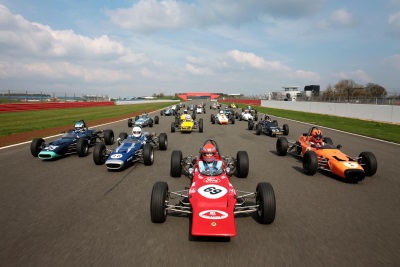 Just days to go before the dawn of another unmissable blockbuster Packed grids, special anniversaries and great entertainment for all ages Top Ten attractions at the worlds biggest classic motor r...