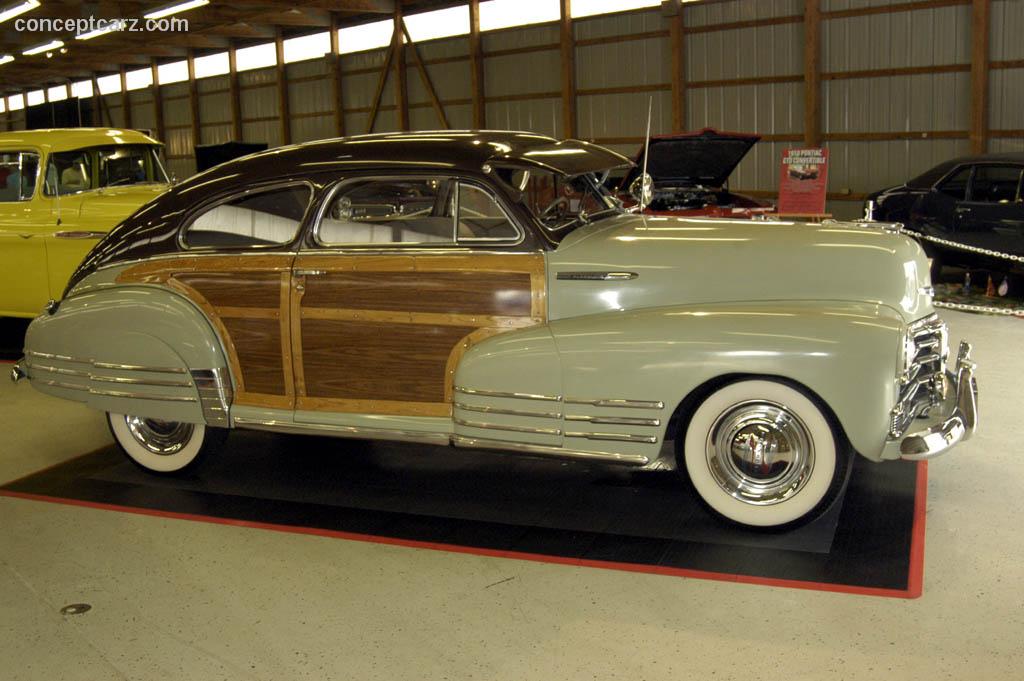 Like many other marques for 1948, Chevrolet continued to offer carried-over pre-war styling from 1942 for one last time. Some manufacturers - mostly the independents including Hudson, Packard, Nash, and Studebaker - beat the 'Big Three' to offering all-new models for 1948. Chrysler, Ford, and GM would have their turn in 1949.

The Fleetline rested on a 116-inch wheelbase and for 1948, was given a new grille. The Aerosedan was Chevrolet's most popular model with 211,861 sales - far exceeding Chevrolet's other bodystyles. The base price before options was $1,434. The Aerosedan was an attractive design which gave the impression of movement, even when the car was at a standstill. The rear seat offered adequate headroom and there were opening rear quarter windows despite the fastback roofline.

Neither Chevrolet or Fisher Body offered a 'woodie', however there are rumors that one was designed to compete with the Ford Sportsman. Reputedly, 'Country Club' wood panels were produced by Engineered Enterprises of Detroit and applied to the metal body of the Aerosedan. Unlike Ford and Chrysler, the wood was only applied to the sides and not to the rear of the vehicle. The ash and mahogany applique was made exclusively for the Aerosedan. It still remains unclear if this was available from Chevrolet dealers or bought from the outside accessory firm.

Powering the Fleetline was a 216.5 cubic-inch six-cylinder overhead-valve engine offering 90 horsepower. They had a three-speed manual transmission, a 4.11:1 rear axle ratio, and 16-inch tires.
by Daniel Vaughan | Mar 2019

Chevrolet introduced their 1941 Fleetline part-way through the season. It was positioned at the top of the Chevrolet product line, riding on a 116-inch wheelbase, and powered by a six-cylinder engine. The car came in two body styles, an Aerosedan and a Sport Master. The Aerosedan had two-doors while the Sport Master had four. There were over 61,000 examples of the Aerosedan produced while the Sport....
Continue Reading >>

Following the trauma and tumult of World War II, Americans craved a truly patriotic new car rather than a rehashed pre-war design, and makeshift repairs on older cars. Chevrolet introduced a stylish fastback design, the 1941 Fleetline halfway through the season, built on a 116-inch wheelbase, powered by a six-cylinder engine. With a striking resemblance to the Buick Super, the 1941 Fleetline was....
Continue Reading >>

The 1948 Chevrolets wore pre-war styling from 1942 for one last time. The other firms in the 'Big Three' did the same, while the independents (Studebaker, Nash, Packard, and Hudson) offered all-new Models. Chrysler, Ford, and GM introduced their new ....[continue reading]

This is a unique 1948 Chevrolet Fleetline Aero Sedan. A unique accessory sold by dealers was the wood-grained 'Country Club' trim package produced by Engineered Enterprises of Detroit, but sold only through factory authorized dealers for $149.50. It ....[continue reading]