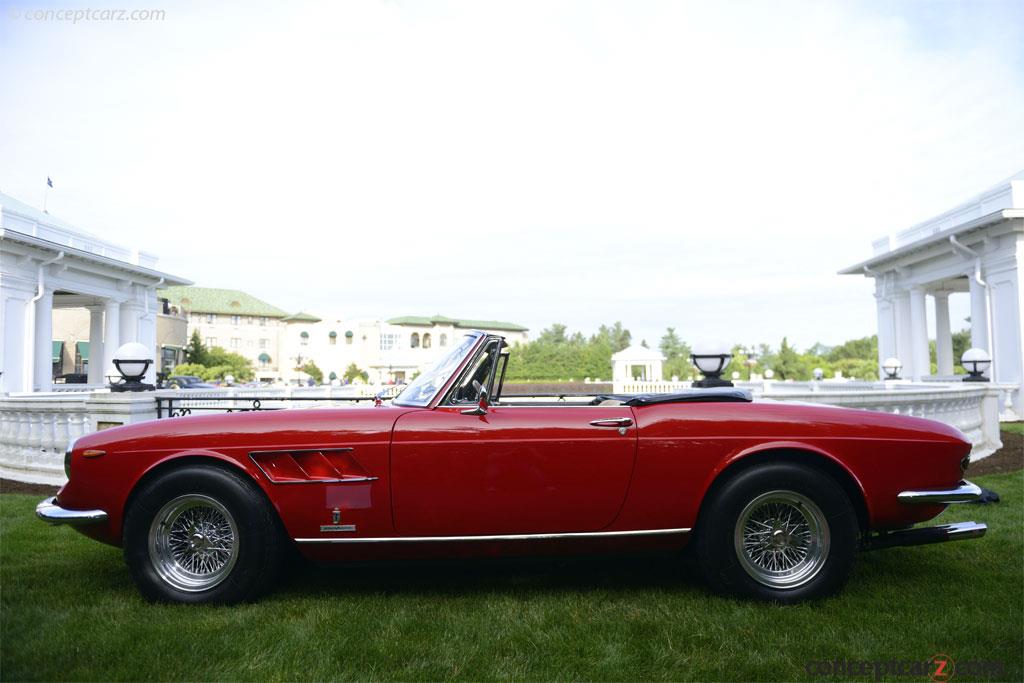 The Ferrari 330 GTC Berlinetta was introduced at the 1966 Geneva Auto Show, followed a short time later by the convertible GTS, introduced in October at the Paris Motor Show. Both were built on the same tubular chassis, which was similar to that of the 275 GTB/4. They all had a similar mechanical layout, with a fully-independent suspension, a rigid torque-tube driveshaft, four-wheel Girling disc brakes, a five-speed rear-mounted transaxle, and Campagnolo alloy wheels. Borrani wires were available as optional equipment. While the 330 GT 2+2 used an engine-mounted five-speed gearbox, the new 330 GTS and GTC featured a five-speed manual gearbox within a rear transaxle, resulting in excellent weight distribution and balance.

Styling and coachwork was courtesy of Pininfarina and used the classic Ferrari nose treatment and Pininfarina's signature oval shallow egg-crate grille design. There were triple-louvered vents on the flanks of the front fenders, a tapered tail, and a spacious and luxuriously appointed interior. The bucket seats were trimmed in Connolly leather and standard features included the wood-veneer fascia carrying the full range of white on black Veglia instruments, air conditioning, electric windows, radio, and a three-spoke wood-rimmed steering wheel.

The 330GTS was luxuriously equipped in the best Gran Turismo manner and just 99 (as many as 100) examples were built by the factory between 1966 and 1968, alongside 600 of the 330 GTC Berlinetta. It was capable of reaching speeds of nearly 150 mph with zero-to-sixty mph accomplished in about seven seconds and the quarter-mile dash requiring only about 15 seconds at just under 100 mph.
by Daniel Vaughan | May 2019

The Ferrari 330 series was produced from 1963 through 1968. They were replacements for the Ferrari 250 GT 22 with many of the series retaining the style and mechanical components of their predecessors. The front-engined, rear-wheel drive vehicle were powered by a derivative of the 400 Superamericas four-liter Colombo 12-cylinder engine. The first in the series was the 330 America, which....
Continue Reading >>

The Ferrari 330 series belonged to a long line of Ferrari road cars with front-mounted V12 engines, cars that were members of a bloodline whose history is still being written by the 612 Scaglietti and 599 GTB Fiorano. The 330s name derived from the then-familiar Ferrari practice of naming cars for their per-cylinder displacement in cubic centimeters, indicating that the engines used to power this....
Continue Reading >>

In 1966 the Ferrari 330 GTC was unveiled at the Geneva Salon. The GTC stood for Gran Turismo Coupe and was a union of the 275 GTB chassis and the engine from the 330 GT. The GTS is a combination of a 400 SuperAmerica and a 275 GTS. It was a product o....[continue reading]

The 330 GTS was launched a year after the 330 GTC and in Paris as opposed to the GTC's Geneva Auto Show. Both were Pininfarina designs and shared the same chassis as the outgoing 275 including its independent rear suspension. 600 coupes left the fact....[continue reading]

After a successful racing career, and being manager of racing for ALFA Romeo, Enzo Ferrari began building his own cars in Modena, Italy in 1947. The racing success and the limited production of Ferrari have made them one of the most desirable and col....[continue reading]

Today the prancing stallion is recognized around the world from chic salons to steamy paddocks. It symbolizes luxury, power, speed and wealth. It wasn't always so. Ferrari's storied racing heritage dates to 1929 when Enzo Ferrari founded Scuderia Fer....[continue reading]

Chassis number 10561 is a matching-numbers 330 GTS that was originally finished in Oro Chiaro with Nero Franzi upholstery, the same colors it wears in modern times. It has air conditioning and four-wheel hydraulic disc brakes. In November 1967, the c....[continue reading]

Shortly after introducing the 330 GTC at the 1966 Geneva Auto Salon, Ferrari unveiled their exclusive spider variant, the GTS. Both the 330 GTC and GTS were built on the same tubular chassis, which was similar to that of the contemporary 275 GTB/4. A....[continue reading]

This Ferrari 330 GTS is one of just 99 examples built. It was completed by the factory in April of 1967 and configured as a U.S.-specification example. It was finished in Nocciola (19397) over a Nero Franzi interior. The car was delivered new through....[continue reading]

This Ferrari 330 GTS is one of 100 produced. This very car debuted at the 1967 Earl's Court Motor Show in London, UK. It is pictured on the Ferrari stand in the 1967 Ferrari yearbook. Its United States debut was as one of three Ferraris shown by Luig....[continue reading]

The 330GTS was essentially an evolution of the 275 series that preceded it. The Pininfarina-designed body combined the tail of the 275 with the front clip of the 400 Superamerica while blending the chassis of the 275 GTB and the engine of the 330 GT ....[continue reading]

The Ferrari 330 GTS was unveiled in October of 1966 at the Paris Salon. It was a spider variant of the 330 GTC introduced earlier that year in Geneva, and only 99 examples were built over three years. Power was from a four-liter version of the Colomb....[continue reading]

This 1967 Ferrari 330 GTS was assembled in early 1967 and was the 28th of approximately 100 330 GTS to be built (as few as 99). It left the factory finished in Grigio Fumo over PelleBleu hides, and was ordered by Luigi Chinetti Motors of Greenwich, C....[continue reading]