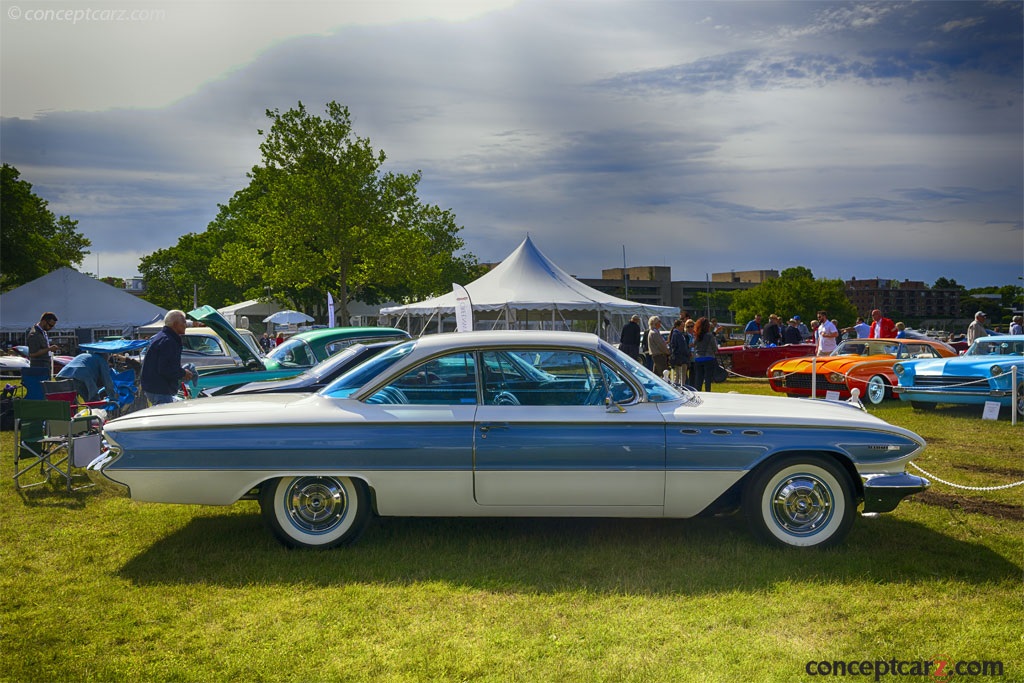 The Buick Invicta was produced from 1959 through 1963. The name Invicta was Latin which refers to invincibility. They were full-sized vehicles offered in multiple body styles including a 2-door hardtop and convertible, and 4-door hardtop and station wagon. In 1960, Buick introduced a custom trim package called the Series 4600 Invicta which featured bucket seats and a 'consolette'. Sales were modest.

The Buick Invicta was powered by Buick's big-block 401 cubic-inch V8 engine which gave the car the nickname 'banker's hotrod.'

In 1962, Buick introduced the Wildcat 2-door hardtop within the Invicta series which featured bucket seats, vinyl top, special badging and trim, and a full console.

Sales for the 1963 Invicta station wagons were 3,495. This was the final year for the Invicta brand name. It was replaced by the Wildcat.
By Daniel Vaughan | Feb 2007A full-sized automobile produced by General Motors, the Buick Invicta had very short model run from 1959 until 1963. Introduced as a full line of body styles for 1959, the Invicta was a continuation of the Buick Century concept that joined the standard size Buick LeSabre body with Buick's larger 401 in³ Nailhead V8 engine, which was dubbed 'the banker's hot rod' which delivered 325 horsepower at 4,400 rpm and 445 pound feet of torque at 2,800 mm.. The model run was short enough that only one engine was used throughout its lifetime, but it was still a significant model in Buick's performance history.

In 1958 Buick introduced the final Century, and Buick then adopted the idea of a big engine and small chassis to create the Invicta. The Invicta name only lasted five years before the Invicta Wildcat of 1962 broke away and became a family of its own of cars that would last until 1970. For 1959 Motor Trend named the Invicta four-door hardtop the 'Best Look-ing Car Overall' and also named the Invicta Estate Wagon 'Best Looking Wagon.' Jim Whipple, Car Life, commented that 'the '59 Buicks are beautifully styled and finished cars, well-built and powerful.' The Invicta name was derived from Latin and meant ‘unconquerable, unbeatable and invincible'. The Invicta line included multiple body styles that included a 2-door hardtop, convertible, 4-door hardtop and a station wagon. Though sales never reached that of the Electra or LeSabre models, they were still consistent with the traditional sales penetration of Buick's sporty mid-priced models. During this time Buick lost market share and dropped from fifth to seventh place among auto manufacturers.

In 1960 an Invicta Custom 4600 trim package was introduced which featured bucket seats and a ‘console' in the hardtop coupe, wagon and convertible. The wagon had a leather bench seat with a center armrest on some 4-door hardtops. The 1960 Invicta was a step back from the excessive change of the 1959 models. The headlights were placed side by side and the hood was lowed, while the front grille was made of blocks that became concave vertical slats. On the inside of the 1960 Invicta the instrument panel was all new with lights from coolant temperature, oil pressure and the generator function. During the endurance test at Daytona the new model performed well. Unfortunately even few Invictas were sold, despite its excellent performance and Buick dropped to ninth place in overall sales. The Invicta came in six models; four-door hardtops, two-door hardtops, sedan, convertible, and the estate wagon which came in two models.

In 1962 the Buick Wildcat 2-door hardtop was introduced within the Invicta series. Featuring more of the interior trim of the Invicta Custom, the Buick Wildcat came with standard bucket seats and upgraded door panels. The Wildcat did feature a long console with a tachometer and a shift lever instead of the Invicta Custom's shorter console. Other features included unique badging and exterior trim, and taillights and a vinyl top that was utilized on the Electra 225 instead of those of the LeSabre/Invicta.

The Wildcat replaced the Invicta in 1963, taking over the two-door coupe, four-door hardtop and convertible body styles. As its sole model the Invicta series had a 6-passenger station wagon and only 3,495 were ever built in 1963 before the name disappeared completely.By Jessica Donaldson

The 1961 Buick Invicta was available as a two- or four-door sedan and a convertible. Power was from a 401 cubic-inch V8 engine that produces 325 horsepower. They had a dual-path Turbine four-speed automatic gearbox with disc brakes at the front and h....[continue reading]