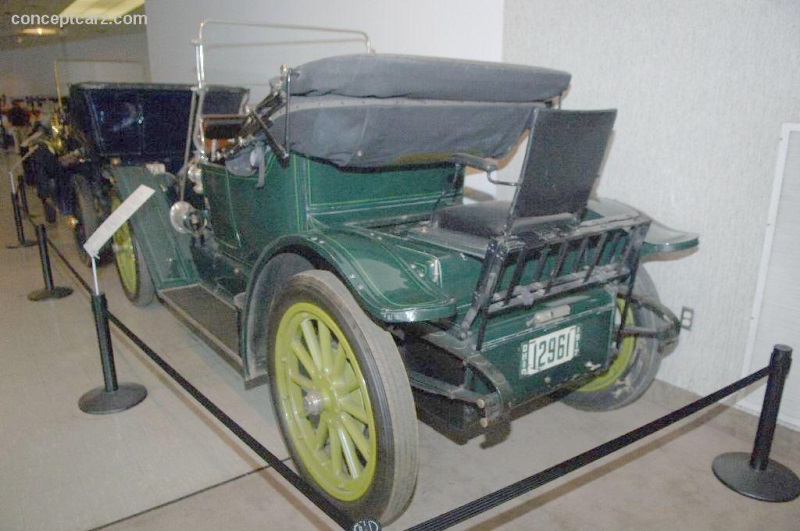 The three Ps of automotive prestige included Packard, Peerless, and Pierce-Arrow, producing some of the finest vehicles during the first three decades of American's automobile century. Packard arose in 1899 from a customer's disappointment with his newly-purchased Winton, and Peerless was founded in 1900 from a company that made clothes wringers. Pierce-Arrow entered the automobile market a year later, with a history that included household items such as birdcages.

George N. Pierce entered a partnership in Heintz, Pierce, and Munschauer, of Buffalo, New York to manufacture bird cages. As the nineteenth century progressed, the firm expanded its catalog to include iceboxes and bath tubes. In 1872, Pierce bought his partners and renamed the company for himself. Bicycle manufacturing soon followed, and in 1900, he built a steam car. A gasoline-powered car was operating by that November and in 1901, the manufacturing of a DeDion-engined 'Motorette' began.

One of the early highlights of the Pierce company occurred in 1904 with the introduction of the four-cylinder Great Arrow. One example was driven in the 1905 Glidden Tour by Pierce's son Percy, who won the reliability contest hands down. Pierce claimed the Glidden trophy for the following four events. The words 'Pierce' and 'Arrow' became so intertwined in the public eye that both cars and companies were renamed Pierce-Arrow in 1909. By this point in history, Pierce-Arrows, which were priced from the low $3,000s to $7,000, had joined Packard and Peerless in comprising the 'Three Ps' of luxury American motor car manufacturing.

David Fergusson, a British-born engineer of Scots ancestry, joined Pierce in 1901, and the early Pierce cars were principally his work and would define the direction of the company for many years to come. He toured Europe with Manufacturing Vice-President Henry May in 1905, visiting all the British and Continental automobile factories, studying design trends, and manufacturing methods. One particular observation they made was the move to larger cars powered by six-cylinder engines. This pattern would define Pierce-Arrow cars for the next fifteen years.

In 1907, Pierce introduced its first six-cylinder automobile, the Model 65-Q. In a similar fashion to the four-cylinder cars that preceded it, the new powerplant used a T-head configuration and displaced 648 cubic-inches. In 1908, a smaller, forty horsepower model 40-S was added to the lineup.

The 1912 Pierce-Arrow Model 36T grew to 127.5-inches in wheelbase and body styles included a four-passenger tourer, five-passenger tourer, Landaulet, and a Brougham. A runabout priced at $4,000 was also available riding on a short, 119-inch wheelbase. The tourers also listed for $4,000 while the other two body styles were nearly $5,000.

This 1912 Pierce-Arrow Model 36 Runabout carried a factory price of $4000 and was equipped with a six-cylinder 386.4 cubic-inch engine capable of producing 36 horsepower. The Pierce automobiles were very durable and popular with many professionals in....[continue reading]