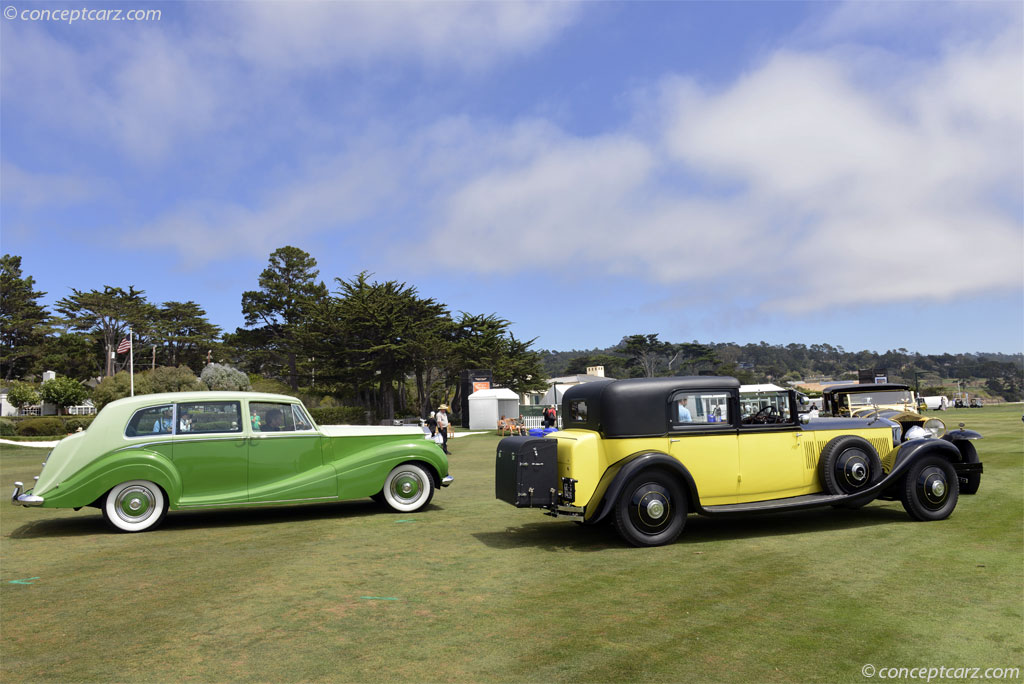 Rolls-Royce introduced the Phantom II in 1929 as a successor to the New Phantom (retrospectively Phantom I) with deliveries commencing in September of that year. The Phantom I had inherited its underpinnings from the preceding 40/50 hp Silver Ghost, while the Phantom II was an entirely new chassis in similar fashion to that of the smaller 20 hp Rolls-Royce. Two wheelbase lengths were available including a 144- and 150-inch platform. The Phantom II provided an ideal platform for designers and coachbuilders, as the high cantilever spring rear suspension found on the Silver Ghost and Phantom I had been removed. The Phantom II had a low slung frame, a sweeping hood that measured half the length of the car, and a 'Spirit of Ecstasy' mascot adorned the iconic radiator shell, set well back over the front axle.

The overhead-valve six-cylinder engine used the Phantom I's cylinder dimensions and basic layout, consisting of two blocks of three cylinders, with an aluminum cylinder head common to block. The magneto/coil dual ignition system was also sourced from the Phantom I. The combustion chambers were redesigned and the head was now of the cross-flow type, with inlet and exhaust manifolds on opposite sides. It had a 7,668cc displacement and fitted with a single Jet Rolls-Royce carburetor delivering 120 horsepower. The engine was mated to a four-speed manual transmission and servo-assisted drum brakes were located at all four wheels.

Rolls-Royce of America was launched in Springfield, Massachusetts on October 18th of 1919 and produced 2,944 examples of the Silver Ghost and New Phantom cars between 1921 and 1931. The Great Depression of the early 1930s had crippling effects on the automotive industry and by 1930, the Rolls-Royce of America operation was in trouble. It soon closed with coachbuilder Brewster becoming the importer-distributor for Rolls-Royce in the United States, under the command of John Inskip. The Derby factory built a series of 'Americanized' Phantom II chassis and sent them to Springfield (125 Phantom II chassis). These cars had chassis numbers ending with either 'AJS' or 'AMS.' The 'A' represented a car modified for the American market. They received an American-type central gearshift, replacing the British-style side lever, and were left-hand drive. Manual control of extra cylinder lubrication was fitted for cold starts, and the radiator shutters were thermostatically controlled to open or shut depending upon engine temperature. Under the impression that Americans drove faster and more aggressively than the British - along with assistance of higher gear ratios for high-speed touring - the U.S destined cars received front and rear bumper supports, heavier rear brake drums, and wider brake shoes. After being built and tested at Rolls-Royce Works in Derby, England, they were shipped to the United States Customs at the Port of New York. They were shipped without a tool kit, horn, chassis lubrication fittings, tires, spring gaiters, spark plugs, and hood locks, trimming Atlantic-crossing shipping costs. After the chassis arrived, they were fitted with American-sourced parts.

All coachbuilders who supplied coachwork for Rolls-Royce supplied their designs to the company for approval. After the body was fitted to the chassis, the coachbuilder returned the car to Rolls-Royce to be tested before final inspection and delivery. The best-known supplier of bodies for the American Rolls-Royce was Brewster & Company, located on Long Island, New York and founded in 1810. They had facilities in England and won a Gold Medal at the 1878 Paris Exposition for a horse-drawn carriage. Their first motor body was built in 1905 and in 1908, mounted a landaulette on a Silver Ghost chassis. Rolls-Royce of America purchased Brewster in 1925 and in 1931, the firm began designing and fitting bodies to the left-hand drive Phantom II's imported from England. Brewster bodied nearly all American Rolls-Royces during the last five years of Springfield production.

The Phantom II Continental was the last Rolls-Royce to be designed under the personal supervision of Henry Royce, before his death in 1933. The Continentals were designed for swift continental touring and had a top speed of nearly 100 mph. During the brief production lifespan, just 281 examples of the Phantom II Continental were built. They were exclusive, guaranteed by the very steep price tag. Famous owners included racing drivers Sir Malcolm Campbell and Woolf Barnato, Prince Ali Khan, Princess Alexis Midvani, the Prince of Nepal, Lord Londesborough, the Earl of Warwick, the Earl of Roseberry, Lord Doverdale, Lionel de Rothschild, Anthony de Rothschild, the Maharaja of Bahawalpur, the Maharaja of Jodhpur, N S Gulbenkian and Noel Coward.

A pre-production Continental model, chassis number 26EX with a design by Ivan Evernden and coachwork by Barker & Company, won the Grand Prix d'Honneur at the Biarritz Concours d'Élegance in September 1930.
by Daniel Vaughan | Jun 2019

The Phantom II was the first completely new car since the 20HP seven years earlier. The Phantom II was still rated 4050 HP but was lower and the springing half-elliptic all around. The car, although to Royces design and specification, was mainly the work of his West Wittering design team and included many innovations and a redesigned engine that, with the gearbox, was now one unit. The introduction....
Continue Reading >>

The Rolls-Royce Phantom II was very similar to the Phantom I in many ways, but brought improvements such as a higher horsepower rating and the removal of the traditional torque-tube drive. Instead, the engine and gearbox were constructed in unit with each other rather than being separate. The Autovac was now using an engine-driven pump. A new water-heated induction system was used. The Battery....
Continue Reading >>

1931 marked a watershed year for Rolls-Royce. Sales of Springfield Phantoms fell so precipitously that production of Phantoms at the factory in Springfield, Massachusetts ceased. Consequently, the chassis for the Phantom II on display was manufactu....[continue reading]

This magnificent Rolls Royce Phantom II with coachwork by Wilkinson is a very special car. It is powered by an engine meant for aircraft and has more horsepower than most modern supercars. In the post-War era, there were a surplus of aircraft engines....[continue reading]

There were 1,672 examples of the Phantom II created worldwide during the Depression era years. Many have survived the test of time and many are still in excellent condition. This example is chassis number 125GY and rides on a long 150-inch chassis.....[continue reading]

This 1931 Rolls-Royce 40/50 HP Phantom II Sedanca DeVille wears coachwork by London-based firm of Thrupp & Maberly. It is believed that it was completed in November of 1931 and sold to first owner Sir Ronald Gunter - the English Baronet, privateer '....[continue reading]

This Rolls-Royce, with chassis number 195GY, was delivered to T.A. Roberts, the Chairman of Park Ward Coachbuilders, for his own use as well as demonstration purpose. The long chassis was specified for close coupled coupe coachwork. It was also setup....[continue reading]

Rolls-Royce of America was launched in Springfield, Massachusetts on October 18th of 1919 and produced 2,944 Silver Ghost and New Phantom cars between 1921 and 1931. When production of the Phantom II came to a close in England, Springfield was left w....[continue reading]

There were 28 examples of the Rolls-Royce Phantom II Continentals produced. Wealthy owners included such names as the racing drivers Sir Malcolm Campbell and Woolf Barnato, Prince Ali Khan, Princess Alexis Midvani, the Prince of Nepal, the Earl of Wa....[continue reading]

Henry Royce met Charles Rolls in 1904 shortly after Royce built his first motor car. Rolls owned a motorcar dealership and began purchasing cars from Royce. They soon decided to join forces and established a factory in the English town of Derby. The ....[continue reading]

Chassis number 222 AJS was originally delivered on October 2, 1931, to Helen Hay Whitney. It arrived with St. Martin coachwork by Brewster, and it was a resident of the Whitney carriage house for some time. It was eventually acquired in 1951 by Samue....[continue reading]

Rolls-Royce produced the Phantom II from 1929 to 1935. It was an evolutionary replacement for the Phantom I. With no increase in price, the Phantom II was radically redesigned resulting in a very fine car having little in common with its predecessor.....[continue reading]

Quite possibly, the Schneider Trophy was the impetus for the Continental having been built at all, in 1929, the famous air race was won by a Rolls-Royce-engined Supermarine S6. Sir Henry Royce was introduced to aviators and other sportsmen who prefer....[continue reading]

Rolls-Royce produced the Phantom II from 1929 to 1935 with an improved engine over its predecessor the New Phantom. Rolls-Royce never found it necessary to publish horsepower figures; it was assumed to be more than adequate. As introduced, the Phanto....[continue reading] 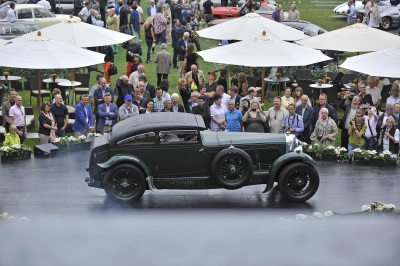 Total 1931 Rolls-Royce Phantom II production: 0
© 1998-2021. All rights reserved. The material may not be published, broadcast, rewritten, or redistributed.